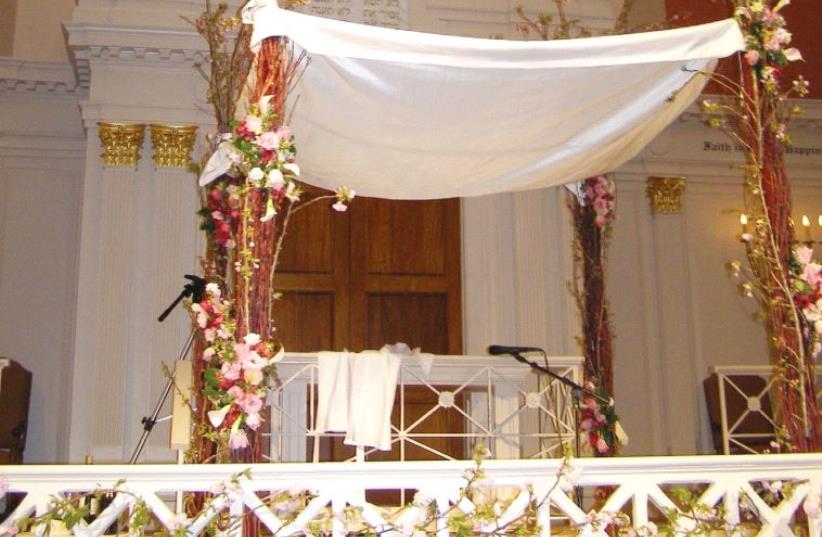 Jewish wedding (Illustrative)
(photo credit: WIKIMEDIA)
Advertisement
With the wedding season about to get into full swing and the Tu Be’av Jewish day of love falling on Friday, activist groups have emphasized the importance of marrying couples signing halachic prenuptial agreements ahead of their nuptials.Due to a stipulation of Jewish law, divorce refusal by one of the spouses in a marriage can severely complicate efforts to end the union.This situation arises in hundreds of cases a year, when most commonly a husband but in some cases also a wife, refuse to grant a divorce and the other spouse is “chained” to the marriage, and cannot get on with their lives or re-marry.According to a study by the Rackman Center, it takes an average of 642 days for a woman to receive a bill of divorce after proceedings are initiated in a rabbinical court. Between 1995 and 2007, 12.5 percent of cases took more than four years to obtain a divorce, and 28.4% took at least two years.Halachic prenuptial agreements which impose financial sanctions on recalcitrant spouses are designed to dissuade people from attempting to use this power granted by Jewish law to extort their partner for better terms, or from taking revenge or any of the other motivations for divorce refusal.Rabbi Uriel Ganzel, who directs the Agreement from Love program for the Tzohar organization, says that signing such a contract is “the ultimate realization of true love” between partners in a marriage. Tzohar is an organization of national Orthodox rabbis.“The reality is that when a man and woman embark on a new life together and are united in love, it is critical that they appreciate at that very moment that we can never know where the future will take us,” Ganzel said.“This realization requires that couples have the vision and compassion for one another to sign the agreement and save any potential discomfort later in life.”The rabbi also sought to dispel the preconception that signing a halachic prenuptial agreement indicates a lack of commitment between the two spouses.“With a simple signature, you are demonstrating the ultimate in trust by saving your loved one from the types of pain that none of us can foresee,” he said.“But even more so, by encouraging the continued growth in popularity of this agreement you can play a part in a real social revolution that we believe will eventually rid society of the challenges of refusal and agunot.” The term agunot is a halachic term for a Jewish woman who is “chained” to her marriage.There are several prenuptial agreements available in the country including Tzohar’s “Agreement from Love,” launched two years ago which has been signed by almost 1,000 couples so far.The agreement stipulates that should a spouse refuse to grant or accept a divorce, they will be obligated to pay NIS 6,000 a month or half their salary, whichever is higher, to their partner until the divorce is finalized.The idea is that such sums would be prohibitively high for an average person to continue paying, and therefore constitute a sufficient incentive to induce them to agree to the divorce.Tzohar has assisted with and conducted some 50,000 marriages and says that more than 600 weddings will be performed under its auspices this September.The Center for Women’s Justice also has a prenuptial agreement, although it does not utilize financial inducements but rather states that the marriage will not be valid if one of the spouses sues for divorce or if the couple lives apart for more than 18 months.CWJ said that it is important for people to understand they can marry “in a Jewish and halachic way and still defend [themselves] against divorce refusal and being “chained” [to a marriage].”“If you’re about to get married, between the meeting with the wedding dress stylist, the make up artist, the catering team and the photographer, speak to us to receive free legal advice,” CWJ said in a statement.And another prenuptial agreement is the Agreement for Mutual Respect that was launched in 2001 and drawn up by several rabbis along with Dr. Rachel Levmore, an expert on Jewish law regarding such agreements, with the consultation of rabbinical court justices and other rabbinic and legal authorities.The Agreement for Mutual Respect has been signed by several thousand couples and, like Tzohar’s agreement, imposes financial penalties on a recalcitrant spouse.According to Levmore, director of the Agunah and Get-Refusal Prevention Project of the International Young Israel Movement in Israel and the Jewish Agency, the agreement has led on several occasions to a swift divorce when indications were that one of the spouses was refused or was recalcitrant about terminating the marriage.Levmore says that the agreement is so watertight that the very fact that the couple has signed it leads to a quick and easy divorce since legal advisers recognize that there would be no way to renege on the terms of the signed document.It also affords the spouses great autonomy, she said, since initiating a divorce having signed the Agreement for Mutual Agreement almost inevitably leads both partners to make a joint request for divorce to the rabbinical courts which can insist on reconciliation if the request is made by only one spouse.Like Ganzel, Levmore insisted that signing such an agreement is a demonstration of deep love by the spouses to each other.“This is the most romantic step one can take, since by signing the agreement each spouse is saying ‘I love you so much that I want to protect you from any harm that may happen to you for the rest of your life, and I even want to protect you from myself so that I don’t harm you,’” said Levmore.