The stirrings now afoot may be little more than distractions and background noise in a country in the dog days of summer. More likely, they signify the forming of an unexpected political storm. 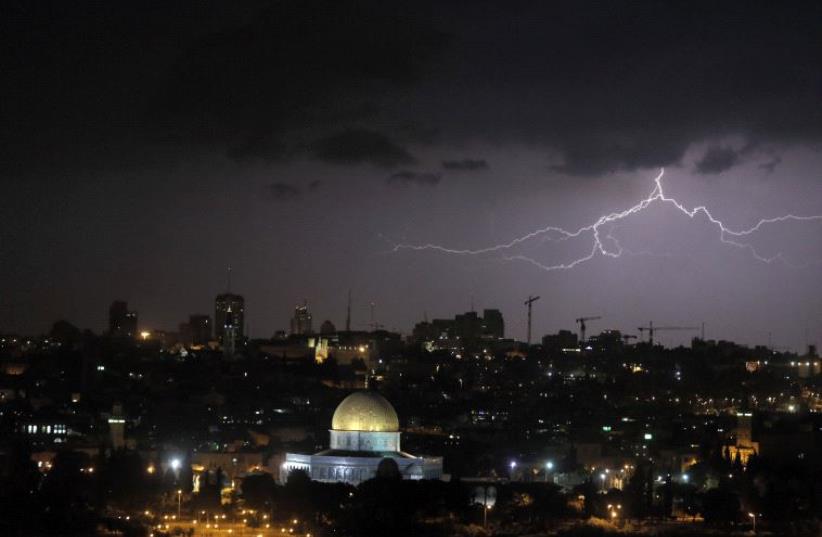 Lightning illuminates the sky over the Dome of the Rock in Jerusalem
(photo credit: AMMAR AWAD/REUTERS)
Advertisement
As Israeli summers go, this one hasn’t been too bad. No war in Gaza. Worse terrorism in Europe than in Israel. Crazy political shenanigans happening not here, but in the US, far, far from our shores.Then, boom, out of nowhere, it feels as if we are careening – yet again – toward new elections. All of a sudden the most important issue – nay, an issue upon which the fate of Israeli democracy hinges – is whether the new Public Broadcasting Authority will begin functioning on time or a few months later.All of a sudden what the state comptroller eventually writes about Israel’s preparedness for Hamas’s terrorist tunnels during Operation Protective Edge is a major issue.There will be a state comptroller report, but one which no one but those intimately involved is ever really going to read.These two issues have triggered a cacophonous battle between Prime Minister Benjamin Netanyahu and Bayit Yehudi head Naftali Bennett, between the Likud and Bayit Yehudi.The Likud charged that Bayit Yehudi’s leaders are stooges for the Left out to harm Netanyahu. Bayit Yehudi countered that Netanyahu is faux right wing, someone who voted for withdrawing from Gaza, released more terrorists than anyone ever before, and doesn’t build in Judea and Samaria.And these parties are coalition partners.As Buffalo Springfield sang in that 1960s anthem “For What It’s Worth”: “There’s something happening here, and what it is ain’t exactly clear.”What it may be, however, is a harbinger of new elections, ones that Netanyahu himself might initiate.The carping coming from Bennett in recent weeks is reminiscent of the noises that Bennett, Yair Lapid and Tzipi Livni were all making in the fall of 2014 inside Netanyahu’s second government, until – when Netanyahu deemed it opportune – he fired Livni and Lapid and went to new elections.Looking around him right now, Netanyahu could be forgiven for thinking that this is as good a time as any to go back to the people: not necessarily because his popularity is soaring (it isn’t), but because almost every other party is in disarray.Inside the Likud, rivals for his leadership have not gained that much traction.Gideon Sa’ar has not been heard of much lately, and Moshe Ya’alon, who picked up a lot of momentum after he was unceremoniously booted by Netanyahu from the Defense Ministry, has not really capitalized on his moment. Furthermore, he is set to leave shortly for the US and a stint at the Washington Institute for Near East Policy, a position from which he can also reach out to potential fund-raisers for a political run, but where he will be out of the Israeli limelight.Bayit Yehudi, meanwhile , is split between the Naftali Bennett-Ayelet Shaked faction that relishes beating up on Netanyahu from the Right, in an effort to poach Likud voters; and Uri Ariel, from Bayit Yehudi’s Tekuma faction, who remembers well how the Tehiya Party brought down Yitzhak Shamir’s government in 1992 because it was not right-wing enough, thereby paving the way for Yitzhak Rabin’s election.The Zionist Union, at its convention on Sunday night, showed the country that it is in utter disarray, chewing up yet another leader, though they have not yet spit him out (that will likely come at the next party convention).And Yisrael Beytenu head Avigdor Liberman, who just entered the government a couple months ago, is not a threat to Netanyahu’s leadership.He just moved into the Defense Ministry in May, and needs more time to prove himself there, gain credibility, and then be able to launch a challenge against Netanyahu. But not yet; it’s too soon.Which leaves Yesh Atid’s Lapid as the only real threat. But Netanyahu could be excused for thinking that when push comes to shove, when the Israeli voters decide who they want in charge of their security issues, they are unlikely to trust it to the largely untested Lapid.This political scenario may explain another issue that has suddenly burst onto the scene, seemingly out of nowhere: the case of the hundreds of missing Yemenite children who disappeared in the early days of the state, with their relatives alleging that they were kidnapped and given to Ashkenazi couples.This is an issue that has been investigated by the state on three different occasions, the last time in 2001. Yet it is an issue that has never satisfactorily been put to rest.“The issue of the Yemenite children is an open wound that continues to bleed in many families who do not know what happened to the babies, to children that disappeared, and they are looking for the truth,” Netanyahu said last month in a video on his Facebook page before a discussion on the matter in the Knesset’s Constitution, Law and Justice Committee.He charged Minister Tzachi Hanegbi with the authority to look into the matter.On Saturday night, Hanegbi – when asked about the matter on Channel 2 – said that after studying the material, the conclusion he reached was that “they took the children and gave them away. I don’t know where.”The “they” here is the Ashkenazi establishment, and if an election were called, this could become an issue that could galvanize some voters against the Ashkenazi establishment.And few politicians are viewed as more of an embodiment of that establishment than Lapid.In private meetings, Netanyahu likes to present himself more as a policy wonk, than a politician; someone much more interested in reading policy papers than pressing the flesh at Likud branch meetings in Holon.And though this may very well be the case, it would be a mistake to underestimate his political acumen.Not for nothing has he won fovur elections in this country – in 1996, 2009, 2013 and 2015 – no easy feat by any stretch of the imagination.The man has proven a keen sense of political timing.The stirrings now afoot may be little more than distractions and background noise in a country in the dog days of summer. More likely, however, they signify something else: the forming of an unexpected political storm.