“Sisi understands that he is dealing with a statesman who is strong. Forget the [domestic] investigations against him. Sisi sees Netanyahu as someone who can deliver.” 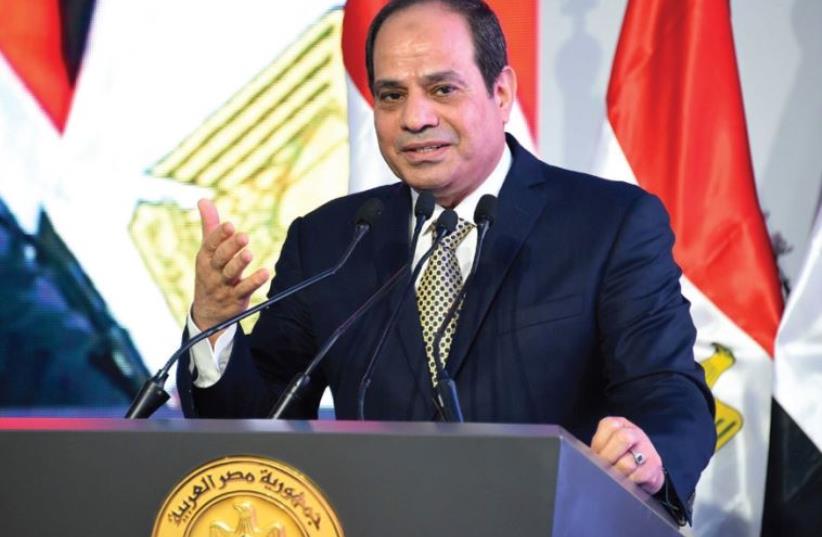 Egyptian president Abdel Fattah al-Sisi, in a May 17 speech, said new opportunities now exist to promote peace between Israel and the Palestinians, and warmer relations with Arab states
(photo credit: REUTERS)
Advertisement
Standing Sunday in the Prime Minister’s Office under a bust of Theodor Herzl, and in front of a bank of Egyptian and Israeli flags, Egypt’s Foreign Minister Sameh Shoukry placed Cairo firmly in the center of the Middle East diplomatic process, shoving Paris to the side.“My visit to Israel today is a continuation of Egypt’s longstanding sense of responsibility towards peace for itself and all the peoples of the region, particularly the Palestinian-Israeli peoples who have suffered for many decades due to the perpetuation of the conflict between them,” he said.In other words, Egypt – feeling more self assured than it has in a number of years, and with more and more countries seeing Egyptian President Abdel Fattah al-Sisi as a important actor in the regional battle against Islamic State – served notice that it is reclaiming the role that was filled for years by Hosni Mubarak, before he was deposed in 2011, as a central player in the Israeli-Palestinian diplomatic process.And, by so doing, Egypt was shunting to the side the French, and their initiative calling for an international conference in December.Shoukry made no mention of any international conference during his statement before meeting Netanyahu, but, rather, spoke of direct negotiations – something that surely pleased his host, Prime Minister Benjamin Netanyahu.Itzhak Levanon, who served as Israel’s ambassador to Egypt from 2009 to 2011, said that both the Palestinian Authority and Israel would prefer Cairo’s involvement to that of Paris.Levanon said that Palestinian Authority President Mahmoud Abbas prefers Egyptian mediation because he knows Sisi will not change his position on what a final accord should look like: a Palestinians state inside the 1967 lines with east Jerusalem as its capital.The Egyptians will only move off of this position, Levanon stated, if the Palestinians do, and Abbas knows that. He also understands that the Egyptians have leverage over Israel that the French do not.“Israel is in a trap,” Levanon said. “It can’t say to the Egyptians what it said to the French – that their initiative is not worth anything. It can’t say this to Sisi because the relationship is so good and important. Israel will weigh what it says to Egypt dozens of times before saying it, and Abbas knows that.”As to why, therefore, Israel wants Egyptian involvement, Levanon explained that this was because “Egypt understands us much more than the French,” and certainly more than some of the others trying to play a role in the diplomatic process, such as Turkey or Qatar.According to Levanon, Israel enjoyed a relationship with Mubarak whereby it articulated to him the country’s red lines, and he then relayed them to the Palestinians.”“Egypt understand us and can convince the Palestinians to be a bit more flexible,” he said.Shoukry’s visit did not come out of nowhere, Levanon added, and was certainly preceded by a great deal of interaction over the last few weeks between Cairo, Jerusalem and Ramallah, where the Egyptian foreign minister visited two weeks ago.Sisi, according to Levanon, feels that now – as his country has improved ties with Russia, China, India Europe and even the US – it is time to return Egypt to its rightful role in the Middle East diplomatic process, a role it is uniquely able to fill because of its strong ties with Israel, born of shared concerns over terrorism and Iran.Moreover, Levanon said, Israel’s recent diplomatic steps have not gone unnoticed by the Egyptian president.“He is reading the map, and sees that Netanyahu succeeded [in reaching an agreement] with Turkey; has good relations with Russia; and just returned from Africa where they want to give Israel back its observer status in the African Union,” Levanon said. “Sisi understands that he is dealing with a statesman who is strong. Forget the [domestic] investigations against him. Sisi sees him as someone who can deliver.”