In the wake of the Hebron eviction, the fourth Netanyahu administration will not collapse anytime soon, and elections are certainly not in the offing. 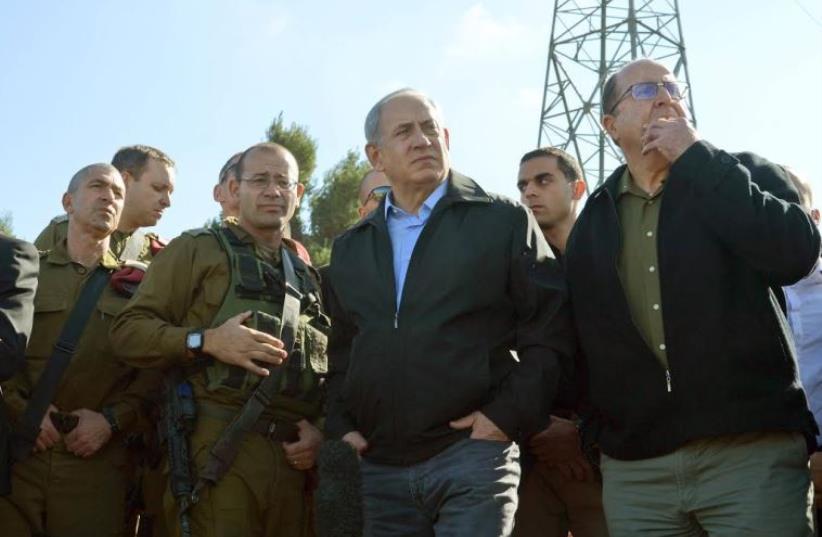 Prime Minister Benjamin Netanyahu and Defense Minister Moshe Ya'alon during a visit to the Gush Etzion Junction.
(photo credit: GPO)
Advertisement
Despite the blustering threats, the emotionally charged fulminations, and political grandstanding from members of the religious Zionist Bayit Yehudi party as well as the hawkish wing of the Likud, we can all relax.The fourth Netanyahu administration will not collapse anytime soon, and elections are certainly not in the offing. The eviction of the Jewish squatters from the home in Hebron is simply a pretext to sock it to Defense Minister Moshe Ya’alon and to put pressure on Netanyahu – nothing more. Bayit Yehudi MK Bezalel Smotrich, the coalition’s “unruly child,” continues to follow the same pattern of behavior since his election to parliament. Whenever possible, he threatens, cajoles, and applies pressure, shrewdly using the leverage afforded to him by the fact that the Netanyahu government is supported by a razor-thin majority of 61 members of Knesset. When the government was discussing the details of the budget, Smotrich threatened to abstain from the vote. He also made threats when the government ordered the forcible eviction of Jewish settlers from the so-called “Dreinof” building, a structure built illegally near the settlement of Beit El.“This is a severe step that creates a crisis of confidence in the coalition,” Smotrich warned at the time. The lawmaker even went so far as to temporarily move his offices to a makeshift site near the disputed building. His party chairman, Naftali Bennett, followed him in tow. Bennett, of course, gave a speech to a crowd of infuriated settler youngsters from a balcony.Ya’alon has been marked as an enemy of the settlement enterprise. The Hebron homes affair is just the latest episode in what has become a series of tug-of-wars between settler leaders and their representatives in the Knesset, and the defense minister.Ya’alon’s decision to order the evictions in Hebron was met with criticism from hawkish ministers Ze’ev Elkin, Yariv Levin, and Miri Regev. They were joined this time by Knesset Speaker Yuli Edelstein. These politicos, however, will show enough caution so that they don’t throw the baby out with the bath water and bring about the coalition’s downfall.Smotrich is not the only one who has threatened not to vote with the coalition as long as the government doesn’t permit the Jewish settlers to inhabit the homes in Hebron. He was joined by Likud MK Oren Hazan and Deputy Minister Ayoub Kara, each for his own reasons.Seizing an opportunity to hit ‘em where it hurts, Kara is trying to score a promotion to a ministerial position following the resignation of Silvan Shalom. Hazan, for his part, is fuming over plans to advance a bill that would pave the way for his ouster from the position of deputy speaker of the Knesset. Edelstein has suspended Hazan from the position.For the time being, the combatants, among them Bayit Yehudi MK Nissan Slomiansky, are holding their fire against Prime Minister Benjamin Netanyahu. Instead, they are aiming their slings at Ya’alon. “The previous government fell due to the fact that it decided to impose its position rather than seek consensus,” said Slomiansky, who also holds the chairmanship of the Knesset’s Constitution, Law, and Justice Committee. “By his actions in Hebron, among other actions, the defense minister is leading us to the same situation.” Notice that it’s Ya’alon he mentioned, not Netanyahu.It seems that at this stage, Bennett is making do with sharp criticism. Earlier this week, he told a defense conference that it wasn’t the diplomatic stalemate in the peace process that was threatening Israel but rather “a stalemate in our thinking.”“Instead of shaping our future with our own hands, Israel is being dragged by prevailing circumstances,” the education minister said. His comments infuriated the prime minister and defense minister. “It appears that there are those who still don’t understand the difference between being a cabinet minister and being a commentator from the opposition,” an aide to the premier said. At this juncture, Bennett is leaving the dirty work to Smotrich. The minister already made his contribution earlier this week.As such, it appears that Bayit Yehudi, the settlers, and the Likud hawks “are talking tough” and taking their anger out on Ya’alon, but they won’t “bring down the house.” The issue will be brought up for discussion during Sunday’s cabinet meeting, and tempers will certainly reach a boiling point. Ya’alon has already said that he has no plans to capitulate, but it appears that a compromise formula will be found to satisfy all sides. Nobody, but nobody, wants elections now, unless someone in the political establishment loses their mind completely.“The settlement enterprise can be bolstered legally,” Kara said earlier this week. The deputy minister also head the Knesset’s pro-settler lobby. “I call on everyone to ease tensions and preserve unity and cooperation for the sake of the wellbeing of the citizens of the State of Israel. We don’t have a better coalition.”