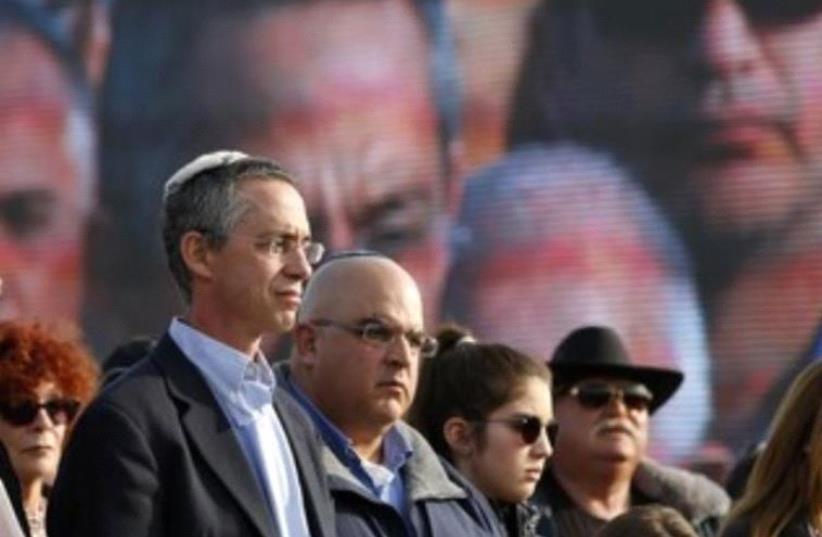 The sons of former prime minister Ariel Sharon, Gilad (L) and Omri (2nd L)
(photo credit: REUTERS/BAZ RATNER)
Advertisement
Gilad Sharon, the son of former prime minister Ariel Sharon, is joining the Likud and may seek a Knesset seat with the party in the next general election, Sharon told The Jerusalem Post on Thursday.“I haven’t decided to run for Knesset yet, but it is an option,” said Sharon. “I care about what is happening in the state, and I want to have an influence. The best way to have an influence and advance my views is in politics.When asked if he supports a Palestinian state, he said only if Israel keeps the Jordan Valley and several other strategic sites.“We cannot let them have territorial contiguity from near Gush Dan to areas controlled by the crazies in Islamic State,” he said. “But I also don’t want a binational state and to give different people different human rights. I want a solution that gives us as much land and security as possible with as few Palestinians as possible.”Ariel Sharon founded the Likud and served in the Knesset from 1974 almost continuously until he suffered a debilitating stroke in 2006.The former prime minister’s other living son, Omri, served in the Knesset from 2003 to 2006.Gilad, who has run his late father’s Negev ranch for decades, also has been a columnist on diplomatic and security issues for many years in the Post and Hebrew media.Sharon said he was not concerned that his political career would be harmed by his father leaving the Likud, forming Kadima and withdrawing from Gaza.“Most of the people in the Likud backed the withdrawal then,” he said. “My father founded the Likud and led it to two big victories. He gave Israeli democracy a big gift because he made a change in power realistic by forming the Likud.”Sharon will not be received warmly by hawks in the party, however. Many Likud activists complained in Likud WhatsApp groups about his advisory role to his father.“I will do whatever it takes to make sure he does not destroy the party again,” Deputy Regional Cooperation Minister Ayoub Kara said. “We don’t need hitchhikers and opportunists. The Likud needs loyal men of ideology who never considered withdrawing from any part of our land. We don’t miss the days of Sharon. We are paying a huge price for the Gaza withdrawal.”Sharon responded that “everyone has a right to support and oppose who they want in a democratic party,” adding: “There will be critics, but I hope I will have supporters, too.”