Hamas threatens to end prisoner exchange in response to the perceived lack of progress in negotiations. 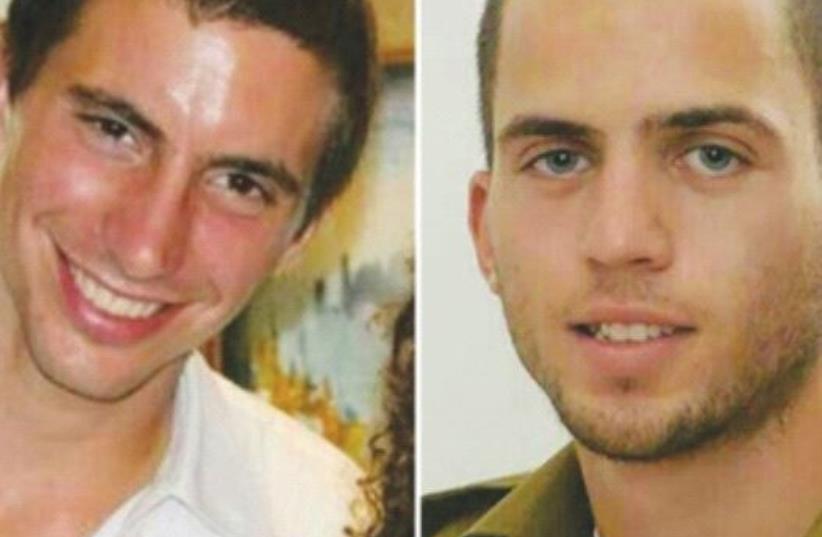 Lt. Hadar Goldin (left) and St.-Sgt. Oron Shaul were killed in action in the war against Hamas in 2014
(photo credit: Courtesy)
Advertisement

Israel is not serious about reaching a prisoner exchange agreement with the Palestinians, Zaher Jabareen, member of the Hamas political bureau, said on Sunday.

Jabareen, who is in charge of the Hamas “Portfolio of Prisoners and Martyrs,” told the Arab Al-Ghad TV channel that Israel has not responded to initiatives made by several parties, including Egypt, Qatar and the United Nations, to reach a prisoner swap deal.

Hamas is currently holding the bodies of IDF soldiers Hadar Goldin and Oron Shaul, who were killed in the 2014 war with Israel.

The terror group is also holding two Israeli civilians, Hisham al-Sayed and Avera Mengistu, who crossed the border into the Gaza Strip on their own.

Jabareen said the issue of the Palestinian prisoners held in Israel remains a top priority for Hamas and is on its agenda on a daily basis.

“The issue of the prisoners and their liberation [from Israeli prison] may be the title of the next battle with the occupation,” the Hamas official said. “Our decision is clear, and we made a pledge and commitment to work to liberate our prisoners, regardless of the cost.”

According to unconfirmed reports in the Arab media, Hamas has demanded the release of hundreds of Palestinian prisoners as part of a prisoner exchange deal.

Hamas has refused to allow representatives of international organizations to visit the two Israeli civilians held in the Gaza Strip.

Asked about a recent report claiming that Israel and Hamas were close to striking a prisoner exchange deal, Jabareen accused the Israeli media of working for “certain agendas and serving certain parties.” He did not provide further details.

In response to a question whether Hamas was pinning any hope on the new Israeli government to conclude a prisoner swap with the Palestinians, Jabareen said his group does not rely on anyone in Israel. “Our strategy is to liberate our prisoners regardless of who’s in power in the occupation entity,” he said. “The day will come when the occupation will pay the price.”

“The day will come when the occupation will pay the price.”

Last month, Hamas leader Yahya Sinwar warned that his group would “close forever” the issue of a prisoner exchange deal with Israel in light of the lack of progress in the negotiations to reach an agreement. “We will find another way to free the Palestinian prisoners,” Sinwar said, without elaborating.

The last prisoner exchange agreement between Israel and Hamas was reached in 2011. Then, Israel released 1,027 prisoners in return for IDF soldier Gilad Schalit, who was kidnapped in 2006 and held in the Gaza Strip.