Bennett: “We will look out for the common good”; Rabbi Eli Ben-Dahan to serve as deputy defense minister. 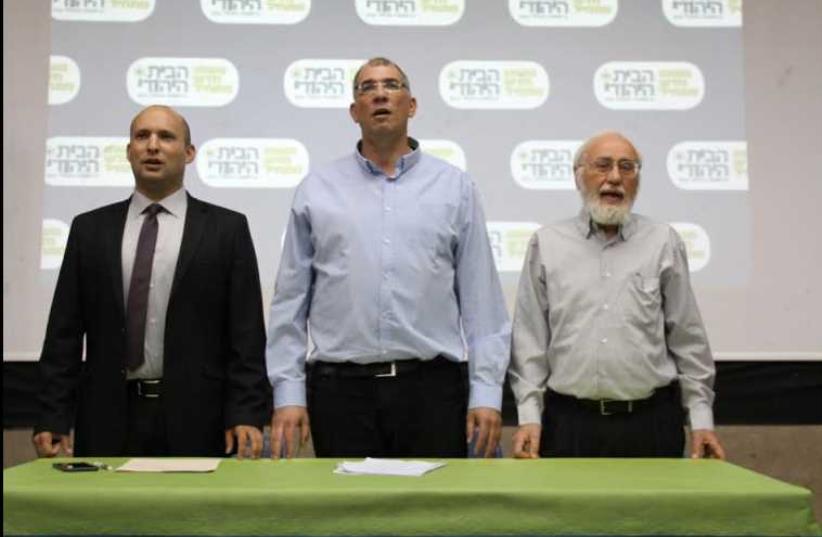 Bayit Yehudi head Naftali Bennett at his party's Central Committee meeting in Moshav Nahalim outside of Petah Tikvah, May 10, 2015
(photo credit: TOVAH LAZAROFF)
Advertisement
Bayit Yehudi leader Naftali Bennet pledged to represent the entire Israeli public right just after his party’s Central Committee on Sunday night approved a coalition agreement with the Likud, which allows it to join the new government.“We will look out for the common good. We will meet the needs of the citizens of Israel, rather then just our own needs,” Bennett said.In the last few days critics have charged that the party’s coalition agreement advances a narrow right wing agenda and have taken issue in specific with the appointment of Ayelet Shaked as Justice Minister.In light of the unjust attacks against her, Bennett said, he was speaking on behalf of an audience larger than those sitting front of him, when he said “we are all Ayelet Shaked.”In addition to Shaked as Justice Minister under the terms of the coalition agreement Bennett will be the minister of both Education and Diaspora Affairs. Uri Ariel will be the Agriculture Minister, with control of the settlement division and the division for the resettlement of Beduin in the Negev. Rabbi Eli Ben-Dahan will be Deputy Defense Minister with authority over the Civil Administration. In addition Sheked will chair the Ministerial Legislative Committee, MK Nissan Slomiansky will head of the Knesset Constitution, Law and Justice Committee. Faction chairman will be MK Yinon Megal. In his speech Bennett attempted to brand Prime Minister Benjamin Netanyahu’s government as well as his own party, as one that would stand above partisan interests. The new government is the government of “all of the Israeli public,” Bennett said. “Even with only 61 Knesset seats, it can be a government of unity. This government can be united if we know how to be united,” he said.Bennett urged those who are concerned that the new government is composed of two-ultra religious parties, two centrist right parties and a right wing party, to look beyond stereotypical assumptions.The test of the government’s unity, is not in which coalition members it has, but whether the governing parties decide to look out for all of the countries citizens, he said.“This will be a government of the coalition and the opposition, of the religious and secular, of the ultra religious, of Jews and Arabs, of new and veteran immigrants,” Bennett said.The coalition agreement, will ensure that a billion shekels will be added into the salaries of soldiers, it does not matter if these soldiers belong to the political right or left, Bennett said.It will provide half a billion shekels more for education, irrespective of whether the pupils are secular or religious, he said. Every Israeli child will benefit form this education budget, Bennett said. He pledged that he would look out for child as if they were his own.The coalition agreement also ensures that the government will strengthen Jewish identity in the Diaspora, provide a program for the development of the Galilee and would work to return illegal migrants in south Tel Aviv to their homes, Bennett said.“We promised that the Bayit Yehudi would have its hand on the steering wheel of the state. It was not easy, but we now have our hand on the steering wheel of the state,” he said. “We won’t let this vehicle collapse or get into an accident. But we won’t continue to sit with the baggage,” Bennett said. “There are no hitchhikers in this vehicle,” he said. “It is filled with the citizens of Israel and everyone is traveling together,” Bennett said.