He skipped Netanyahu’s March 2015 speech to Congress against the emerging deal, saying the PM had not acted in good faith in coordinating the speech with Republicans. 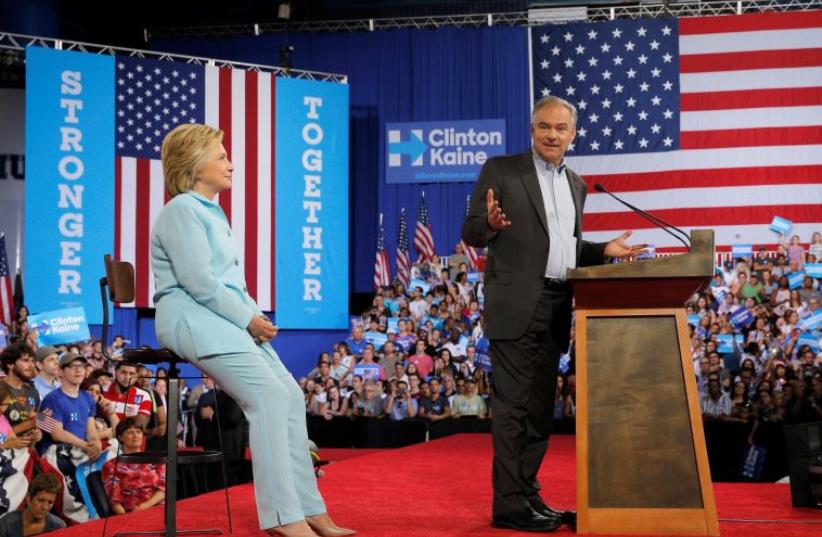 U.S. Senator Tim Kaine speaks after being named by Democratic US presidential candidate Hillary Clinton
(photo credit: REUTERS/BRIAN SNYDER)
Advertisement
YOUNGSTOWN, Ohio — Hillary Clinton named Tim Kaine, the Virginia senator who has made the Middle East one of his fortes, her running mate.Kaine has been a vocal supporter of US security assistance to Israel but found himself at odds with the pro-Israel lobby and Prime Minister Benjamin Netanyahu over the Iran nuclear deal. During the fight over the deal, Kaine criticized Netanyahu on several fronts, but subsequently worked to improve ties between the prime minister and Senate Democrats.“I’m thrilled to announce my running mate, @TimKaine, a man who’s devoted his life to fighting for others,” Clinton tweeted Friday afternoon. The announcement comes after the conclusion of the Republican convention in Cleveland, where Donald Trump accepted the presidential nod with his running mate, Indiana Gov. Mike Pence, and just three days ahead of the Democratic convention in Philadelphia.Kaine, 58, traveled to Israel to promote trade ties during his 2006-2010 stint as Virginia governor. He was an early backer of Barack Obama, who rewarded him when he was elected president with the chairmanship of the Democratic National Committee, a position he held until 2011.He ran for the Senate in 2012, and since then has focused on the Middle East as a member of the Middle East subcommittee of the Senate Foreign Relations Committee. He has traveled frequently to Israel, most recently in January.Kaine was skeptical of aspects of the Iran nuclear deal during the 2013-2015 talks leading to the nuclear rollback for sanctions relief agreement, citing Iran’s past abrogation of agreements and its backing for terrorism in the Middle East. He also supported the push to secure a Senate role in reviewing the dealOnce the deal was done, however, he came to be one of its most ardent advocates, helping to stop a bid by Republicans in Congress to kill the deal.He skipped Prime Minister Benjamin Netanyahu’s March 2015 speech to Congress against the emerging deal, saying Netanyahu had not acted in good faith in coordinating the speech with Republicans.That same month, in an interview with the Forward, Kaine criticized Netanyahu and Israel’s ambassador to Washington, Ron Dermer, for what he described as going along with an effort by “some in the Republican Party to push Democrats out of the relationship with Israel.”“I’m sad that the Israeli ambassador and the prime minister went along with this. They went along with the notion of ‘we’ve got to keep this quiet and not tell Democrats.’ We feel like we’re being pushed away,” Kaine said. “Our party has a long tradition of being pro-Israel, and being pro-Israel doesn’t mean we agree on everything, but we’re friends, we’re allies, we’re partners and to the extent we have disagreements we try to work them out productively.”Kain also expressed “deep concerns about the leaders, frankly, on the Israeli and the Palestinian side” regarding whether they were doing enough to reach a two-state agreement. “That doesn’t make me any less pro-Israel,” he said. “I want Israel to be safe and secure in the future and I worry that some of the activities vis-à-vis Palestine have weakened Israel’s future security, not strengthened it.”In November 2015, after the deal was completed, Kain joined Democratic colleagues in calling for the Obama administration to write a new and strengthened “Memorandum of Understanding” on security assistance to Israel.Then in January Kaine joined seven of his Democratic colleagues in a meeting with Netanyahu in Israel to discuss oversight of the agreement. The delegation also traveled to Vienna to meet with officials of the International Atomic Energy Agency, the UN body monitoring Iranian compliance with the deal. In a statement, Kaine said in the Vienna meeting he “emphasized that the IAEA’s credibility is on the line with the nuclear deal’s implementation and monitoring and that it would be a destructive blow to the organization if it does not quickly catch any attempts by Iran to undermine or cheat on the deal and immediately report those findings.”Kaine, a practicing Catholic, has a close relationship with the state’s growing Jewish community. He was deeply affected by the death in the 2007 Virginia Tech mass shooting of Holocaust survivor Liviu Librescu, who was killed protecting his students. He has cited the heroism of Liviu Librescu in arguing for gun controlAmong other assets he would bring to the Clinton campaign, Kaine is a fluent Spanish speaker, coming from his stint volunteering with Jesuits in Honduras in the 1980s.Some supporters of Sen. Bernie Sanders, Clinton’s main challenger for the Democratic nomination, have voiced objections to Kaine. But in one sign of support among Jewish liberals, Kaine has previously been endorsed by J Street.Kaine has also worked with the American Israel Public Affairs Committee on many issues, despite his disagreement with AIPAC over the Iran deal.In 2013, Kaine helped initiate a letter to the president backed by AIPAC urging intensified sanctions to force Iran to suspend its suspected nuclear weapons program. At the same time, J Street was pushing a competing letter urging Obama to engage with an offer to talk by Hassan Rohani, then Iran’s president-elect.