Kaine is a centrist Democrat with pro-Israel credentials who has visited the Jewish state on multiple occasions. 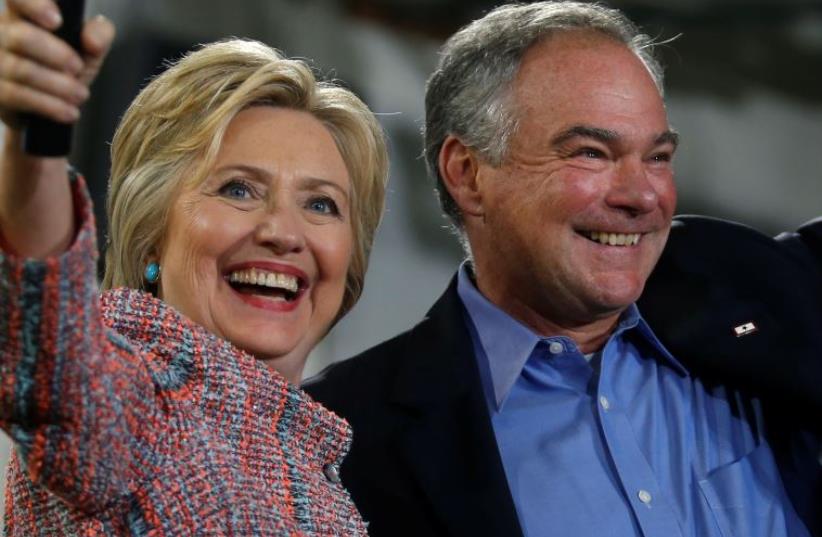 Hillary Clinton with VP pick, Virginia Senator TimHillary Clinton with VP pick Senator Tim Kaine (D-VA)
(photo credit: REUTERS)
Advertisement
WASHINGTON – Presumptive Democratic presidential nominee Hillary Clinton named Tim Kaine, the junior US senator from Virginia, as her running mate on Friday night.The choice of Kaine – a moderate on the Democratic Party spectrum and considered an able manager in his critically important home state – was largely hailed as a responsible choice by her party colleagues, if not an exciting one that would rally its base.Kaine formerly served as mayor of Richmond and governor of Virginia, providing him with extensive governing experience – and the label of insider, in what may prove to be an outsider election year.He serves on the Senate Foreign Relations Committee and the Armed Services Committee where he has been critical of US President Barack Obama’s policy in Syria. Like Clinton, Kaine has advocated for a no-fly zone over parts of the country to alleviate the humanitarian situation there, as well as the refugee crisis gripping Europe.Kaine was an enthusiastic advocate for the landmark nuclear deal reached with Iran last year, and was a chief critic of Prime Minister Benjamin Netanyahu both before and after his speech to Congress on the matter.He characterized the speech as “highly inappropriate” and was one of eight senators to boycott the event.“I’m not dumb, I knew not going to the speech might make some folks mad with me,” Kaine said shortly after the speech. “But I felt so strongly as a matter of principle that this was done in an entirely inappropriate way.”

(Virginia Senator Tim Kaine with former Israel president Shimon Peres. Courtesy of JCRC)Kaine, who has visited Israel numerous times and has met with Netanyahu in Jerusalem, is listed as an “On the Street” candidate worthy of campaign donations by J Street, a Washington-based group that lobbies in favor of a two-state solution. Kaine maintains that the US must play a key role in facilitating an end to the Israeli-Palestinian conflict. The group praised Clinton for her choice.“J Street congratulates Senator Tim Kaine on his selection as the Democratic candidate for vice president of the United States,” the statement begins. “In the course of his lengthy career in public service, Senator Kaine has proven himself to be a great friend of Israel and a champion of pragmatic, proactive American foreign policy.“Senator Kaine, as a member of the Senate Foreign Relations Committee,” the statement continues, “has consistently advocated the need for a two-state solution to the Israeli-Palestinian conflict as the only way to ensure that Israel can survive and flourish as a Jewish and democratic state and that Palestinians can live with independence and dignity.”The Republican Jewish Coalition cast J Street’s endorsement of Kaine as a negative in and of itself, however, also condemning his early support for the Iran deal.Kaine justified his support for the Joint Comprehensive Plan of Action on its merits, but also argued that it would ultimately strengthen US-Israel relations, said Greg Rosenbaum of the National Jewish Democratic Council.“He was very, very strong in making that point whenever he spoke with Jewish groups about this issue,” said Rosenbaum, who has known Kaine for four years. Rosenbaum noted that Kaine was one of the “key whips” for the deal on the Senate floor.Kaine, who has served in the Senate since 2012, has a law degree from Harvard University and was first elected to office in 1995 as a Richmond city councilor.The Virginia lawmaker, a Catholic, is personally prolife.But he also is in favor of legal abortion rights.“He’s made the definitive statement that his personal religious beliefs should not dictate what public policy is, and to me, there’s something in that statement that really gladdens my heart being a Jew in America,” Rosenbaum said.Kaine made his first appearance on the campaign trail on Saturday, urging Democrats to make history by putting Clinton in the White House and leaping to attack Republican presidential nominee Donald Trump’s record.Joining Clinton at a rally in the battleground state of Florida, the bilingual Kaine peppered Spanish-language phrases into a speech focused heavily on introducing himself to voters unfamiliar with the low-key US senator from Virginia.Kaine criticized Trump’s recent suggestion that he might not honor US security commitments to NATO in Europe, and the real estate mogul’s history of casino bankruptcies and founding the failed Trump University.“When Donald Trump says he has your back, you better watch out,” Kaine said, with Clinton sitting at his side nodding. “He leaves a trail of broken promises and wrecked lives wherever he goes. We can’t afford to let him do the same thing to our country.”The Democratic National Convention begins on Monday in Philadelphia, where Clinton is set to become the first female presidential nominee of a major political party in American history.Trump accepted the GOP nomination for president last week in Cleveland.Reuters contributed to this report