Diplomats greeted Rivlin at his official residence in Jerusalem. 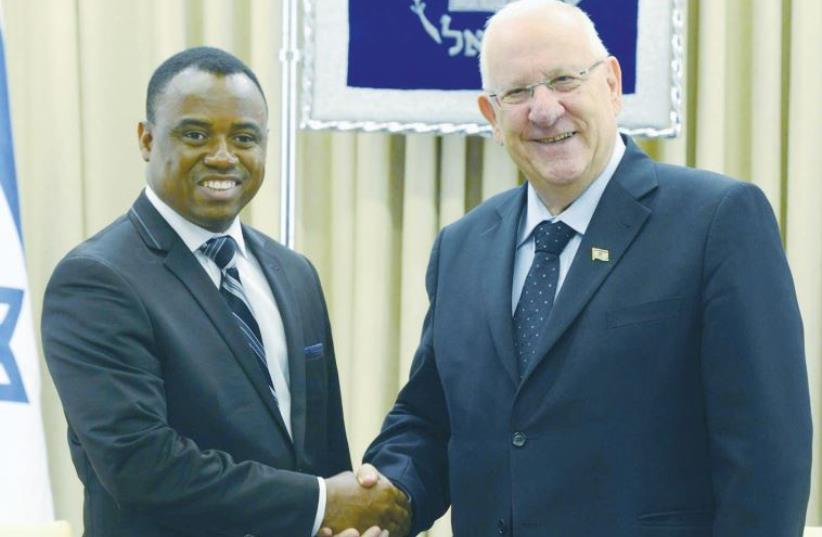 PRESIDENT REUVEN RIVLIN welcomes Sierra Leone’s new ambassador Osman Keh Kamara at a ceremony at the Presidential Residence
(photo credit: Mark Neiman/GPO)
Advertisement
Over the past three months, Israel has welcomed a significant number of new heads of foreign diplomatic missions, and more are on the way.On Monday, five ambassadors presented their credentials to President Reuven Rivlin: Peter Hulenyi of Slovakia; Periyasamy Pillai Selvaraj of Sri Lanka; Jon Hanssen Bauer of Norway; Allison Kelly of Ireland and Osman Keh Kamara, the Ethiopia- based ambassador of Sierra Leone.Noting the date, November 2, Hulenyi said that it is an important date not only in his own life but in the lives of the Jewish people and the State of Israel, in that it is also the anniversary of the Balfour Declaration.Hulenyi invited Rivlin to attend the opening on January 26, 2016 of the Slovakian Holocaust Museum, which is being completed in Sered, on the site of one of three forced labor camps that were erected during the Nazi era.Selvaraj expressed his country’s appreciation for the fact that Israel has agreed to accept significant numbers of Sri Lankan caregivers, agricultural workers and students.His government would be happy, he said, if Israel would agree to take more workers and students. In addition, Sri Lanka would like to enhance its political, economic and cultural ties with Israel.Bauer, who worked for several years as a social anthropologist before becoming a diplomat, is no stranger to Israel. In 1994, he was appointed Norway’s special envoy to the Middle East, advising his country’s foreign ministry on the peace process and on Palestinian refugees. He told Rivlin that he is proud and honored that Norway had hosted the Oslo Accords and is well aware of the ensuing complications. But Norway feels an obligation to relentlessly continue its efforts to make conditions favorable for peace so that Israel and the Palestinians can live side by side in harmony. Bauer also conveyed his condolences for the lives lost to terrorism over the past month. “I’ve been here, I’ve seen the suffering and it really touches us,” he said.Kelly also voiced her condolences “for all the victims of violence,” and in acknowledging that Israel and Ireland have a number of differences, said that she is committed to bridging gaps. Ireland has learned much from the conflict of Northern Ireland, she said, and is willing to share that experience with the Israelis and the Palestinians.Kamara brought good news with him. On November 7, the World Health Organization is scheduled to declare that Sierra Leone is Ebola- free. Kamara thanked Israel for its support during the Ebola crisis, most particularly for the dialysis machine – the first of its kind in Sierra Leone.He also said that Sierra Leone was grateful for all of the scholarships that Israel had made available to enable students from Sierra Leone to study in Mashav courses, which are part of Israel’s international development cooperation program.