The Foreign Ministry was concerned that call gave Erdogan diplomatic clout as important interlocutor when in the past he has actually inflamed tensions regarding the Temple Mount, Channel 2 reported. 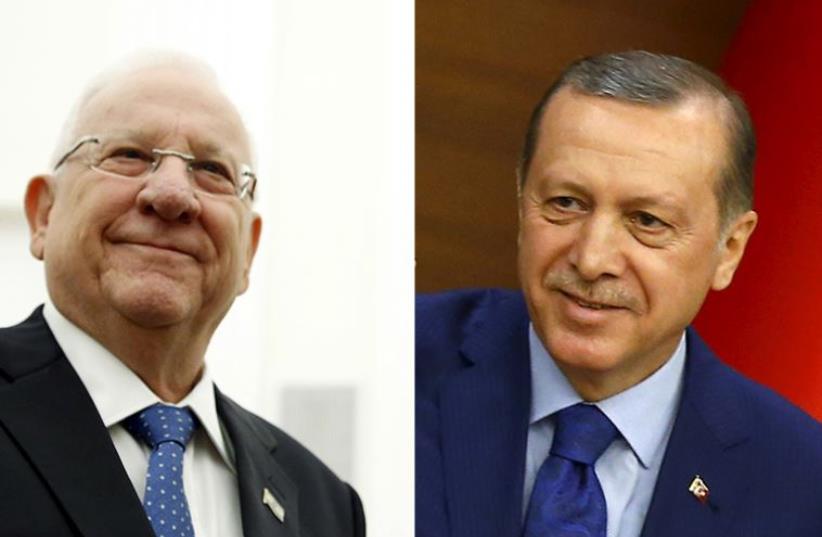 Rivlin and Erdogan
(photo credit: REUTERS)
Advertisement
President Reuven Rivlin asked Turkish President Recep Tayyip Erdogan to condemn last Friday’s terrorist attack near the Temple Mount, when the two leaders spoke by phone on Thursday evening.“The president reminded Erdogan that after the terrorist attacks in Turkey, the State of Israel was quick to condemn those criminal acts. He said Israel expected to hear similar condemnation from Turkey, with the understanding that terrorism was terrorism wherever it took place; in Jerusalem, in Istanbul, or in Paris,” Rivlin’s office said.The Temple Mount is a site that is “holy for all,” Rivlin told Erdogan as he explained that the attack in which two Israeli policemen were killed, was “intolerable.” It “crossed a red line which endangered the ability of all of us to live together,” he said.He assured Erdogan that Israel had maintained and would continue to maintain the status quo at the Temple Mount, in which only Muslims can pray there but Jews and Christians can visit.Rivlin defended the placement of metal detectors at entrances to the Mount to Erdogan, explaining that such steps were intended to ensure that such acts of terrorism could not be repeated, and that Israel was committed to safeguarding the lives of all who visit the holy place.The call came at Erdogan’s request. It is unusual for him to hold such conversations with an Israeli leader. Israel and Turkey reestablished full diplomatic ties in 2016 after a six-year suspension.The Foreign Ministry had advised Rivlin not to take the call, arguing that Erdogan has long been inflaming Israeli Arabs, including those living in Jerusalem. It contended that Erdogan should not be involved in the sensitive process.According to WAFA, the Palestinian news agency, Palestinian Authority President Mahmoud Abbas also spoke with Erdogan on Thursday.He asked the Turkish leader to help calm the situation by pushing for the removal of the metal detectors.