Former UN envoy Bolton to 'Post': US supporters of Trump should not fret

Former US ambassador to UN says he "does not share the concerns" of Jewish groups about cutting of aid or remaining overly neutral between Israel, Palestinians. 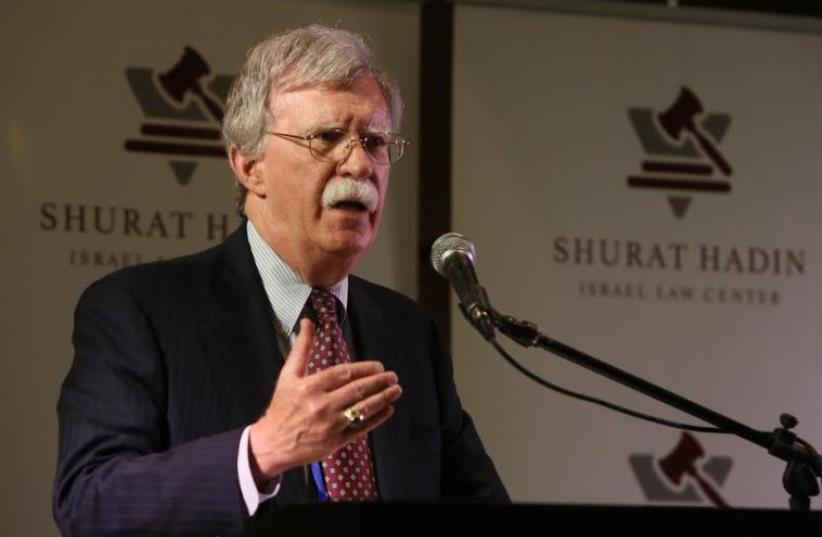 Former UN envoy Bolton to 'Post': US supporters of Trump should not fret
(photo credit: ODED ANTMAN)
Advertisement
Americans who would like to support Donald Trump for president but are worried by some of his highly controversial positions and statements should “keep calm and carry on” supporting him as the Republican nominee, former US ambassador to the UN John Bolton told The Jerusalem Post on Monday at the Shurat Hadin – Israel Law Center Conference in Jerusalem on the laws of war.His “keep calm and carry on” comment was a reference to a Winston Churchill poster in England during World War II.The metaphor of England under siege is apt for Trump, who has been under massive fire from not only Democrats, but also Republicans. His latest positions rankling politicians on both sides of the aisle were his recent call for a ban on Muslim immigration, his implying that US President Barack Obama sympathized or was somehow responsible for the Orlando terror attack and for attacking a US judge as biased because of his Hispanic heritage.Explaining why he supports Trump despite “having disagreements” with some of his positions, Bolton said he has consistently said he would support whoever the Republicans nominate. The former ambassador said that he had even been ready to support libertarian Rand Paul when he was a potential candidate, with the argument that any Republican nominee would stay more true to Republican foreign policy objectives than Democratic presumptive nominee Hillary Clinton.Asked about what issues he thinks Trump reflects his foreign policy views, he listed: rebuilding the American military, declaring the Iran nuclear deal unacceptable and demanding NATO partners share a greater portion of the organization’s budgetary demands.Bolton said that strengthening the American military, which he accused Obama of weakening, is the most important issue, as it would translate into greater projection of US power in all arenas and would deter US adversaries with the message, “don’t even think about challenging us.”Pressed how Trump’s view of ceding Ukraine to Russia would help US deterrence and power projection, Bolton was slightly less comfortable, but said that “this is not his final position, you can’t judge based on campaign [statements].”He added that he had repeatedly advocated for arming Ukraine to help it defend itself.Regarding Iran, he said that “Hilary will support the deal as written... which is a fundamental misperception of how to deal with proliferators and weapons of mass-destruction.”Next, Bolton was asked if Trump’s support for cutting foreign aid would negatively impact relations with Saudi Arabia and Israel.He said the Saudis would be “more sympathetic to him because of his position on the Iran deal.”Regarding Israel, he said he “does not share the concerns” of Israelis and Jewish groups about the cutting of aid or remaining overly neutral between Israel and the Palestinians.One of Trump’s early campaign comments on Israel was that he would be good at cutting deals by staying neutral.He has also talked about cutting foreign aid across the board, without having specifically commented on Israeli aid.Moving from Trump to the ongoing “Brexit” fight about whether Great Britain will exit the EU, he reiterated his view that the exit would be good for the US, England and the EU.He said the EU has been “less than the sum of its parts” and that England would act more in concert with the US in foreign affairs once it is freed from EU allegiances.Honing in on the laws of war and confronting terrorist adversaries who abuse them, which he came to discuss at the conference, he said “there is a bigger question – I believe that the only true law is our own constitution and precepts, on this Earth there is no higher law [for the US] than the US constitution.”He explained that each nation must follow their own supreme domestic laws.Bolton said it is important to establish this as a launching point, because “this so-called international law appeared out of nowhere,” asking “what is its democratic legitimacy?” Asked if this meant he would discard some of the limitations of international law in war regarding civilian collateral damage, he said “This cannot be an abstract moral debate... Terrorists are exploiting people as human shields... We must do more to prevent terrorists from this behavior.”Shurat Hadin – Israel Law Center director Nitsana Darshan- Leitner remarked that their conference was targeted at moving the laws of war “in a direction that will allow the IDF and other democratic countries’ armies to win the wars of today, which are not waged against another army, but against terrorist organizations... without having to worry about war crimes accusations.”