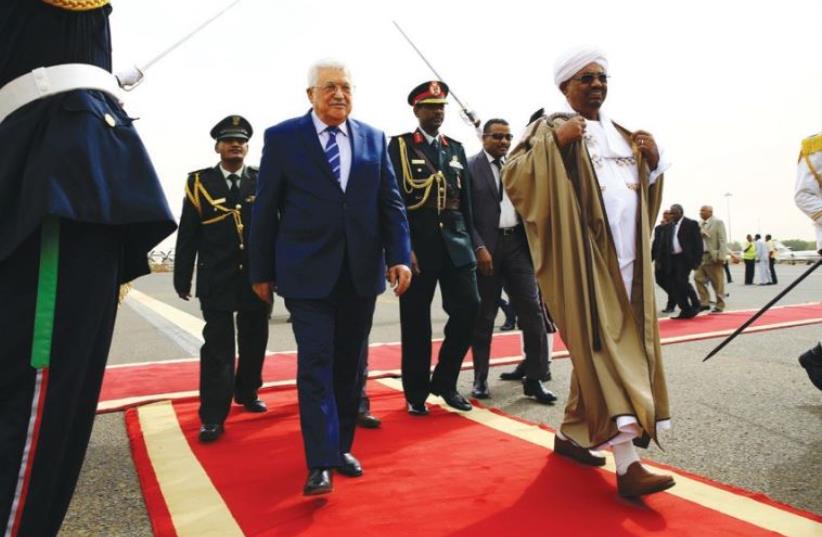 SUDANESE PRESIDENT Omer Hassan al-Bashir welcomes PA President Mahmoud Abbas at Khartoum Airport on Tuesday.
(photo credit: REUTERS)
Advertisement
Israel is continuing to make inroads into Africa, as Chad – which has suddenly found itself on the front lines in the battle against Islamic extremists – is expected to be the next majority-Muslim African state to reestablish ties with Jerusalem, The Jerusalem Post has learned.Guinea and Israel announced the reestablishment of ties on Wednesday, and Prime Minister Benjamin Netanyahu – who visited four East African countries earlier this month – said that another African country would soon follow suit.Chad severed ties with Israel in 1972 after coming under intense pressure from its Arab neighbors, Libya and Sudan.The Post reported earlier this month that delegations from Chad and Mali, both in sub-Saharan Africa, were in Israel recently. Chad, like Guinea, is a member of the 57-member Organization of Islamic Cooperation.But while African countries seem to be warming up to Israel, Palestinian Authority Foreign Minister Riyad al-Maliki announced this week that the PA and Sudan were coordinating to “restrain Israeli movements” in Africa.“President Mahmoud Abbas and his Sudanese counterpart, Omar al-Bashir, discussed developing a strategy for the African continent and coordinating to restrain Israeli attempts to make a breakthrough in Africa,” the PA foreign minister told a group of journalists in Khartoum.On Saturday, PA President Mahmoud Abbas arrived in Kigali, Rwanda, to deliver an address to the 27th Summit of the African Union. He continued on to Khartoum, where he signed a number of agreements with Sudan, one of which establishes a mechanism for political consultations between the PA and Sudanese governments.Abbas’s trip to Rwanda came just two weeks after Netanyahu visited the country as part of a tour of Africa, the first by an Israeli prime minister in nearly 30 years, and is understood to be an attempt by the PA to slow the development of ties between Israel and African countries. Renewal of ties with Chad is of particular importance for Israel, since the Lake Chad basin is “ground zero” in the fight against radical Islam in Africa, as Brig.-Gen Donald C. Bolduc, the commander of the US military’s special operations in Africa, called the country recently in The New York Times.In April, an arms shipment believed to be from Islamic State fighters in Libya was confiscated near the Libya-Chad border. It was headed for the Lake Chad area, apparently intended for Boko Haram, raising concerns that the two terrorist organizations were now cooperating closely. Boko Haram is active in Nigeria, Cameroon, Niger and Chad.Diplomatic officials said that a major impetus for the surge in African interest in better ties with Israel has to do with a desire to tap into its expertise regarding how to combat radical Islamist terrorism. These countries, many of them facing significant terrorist threats, are interested in receiving counter-terrorist training from Israel for their elite military units, as well as access to Israeli intelligence and technology.In addition, one senior official said, Israel’s close security ties with Egypt and Jordan – as well as well-known but underthe- radar contacts with Saudi Arabia and Persian Gulf countries – have convinced many African countries that they no longer have to be worried about Arab pressure against developing ties with Israel, since the Arab states themselves have ties with Israel.Both Kenya’s President Uhuru Kenyatta and Ethiopia’s Prime Minister Hailemariam Desalegn said as much publicly during press conferences with Netanyahu when he visited their countries earlier this month.It is obvious, the official said, that Israel and many of the African states now share a common enemy in Islamist extremism, and the African states are interested in benefiting from Israel’s experience dealing with it.Meanwhile, Togo’s President Faure Gnassingbé is scheduled to arrive for a visit next month, as Netanyahu is interested in going to West Africa in the near future, and holding a summit with countries there similar to the one he held this month in Uganda with the leaders of seven East African countries. Gnassingbé is considered a candidate to be a driving force behind putting together such a summit.Meanwhile, on Thursday, Abbas was scheduled to fly to Paris to consult with President François Hollande about the French initiative to advance the peace process. He is then supposed to return to Africa next week for an Arab League summit in Mauritania.Ziyad Ayyad, a professor of political science at Al-Quds University in Jerusalem, said that despite Abbas’s efforts, Sudan on its own will not be able to slow the development of ties between Israel and African countries.“Non-Arab, Nile basin countries are closely connected to Israel in terms of economics and security, which makes it difficult for [Sudan] to influence their positions vis-a-vis Israel,” he said.