Israel to Russia: We're concerned your tensions with the US might endanger our border 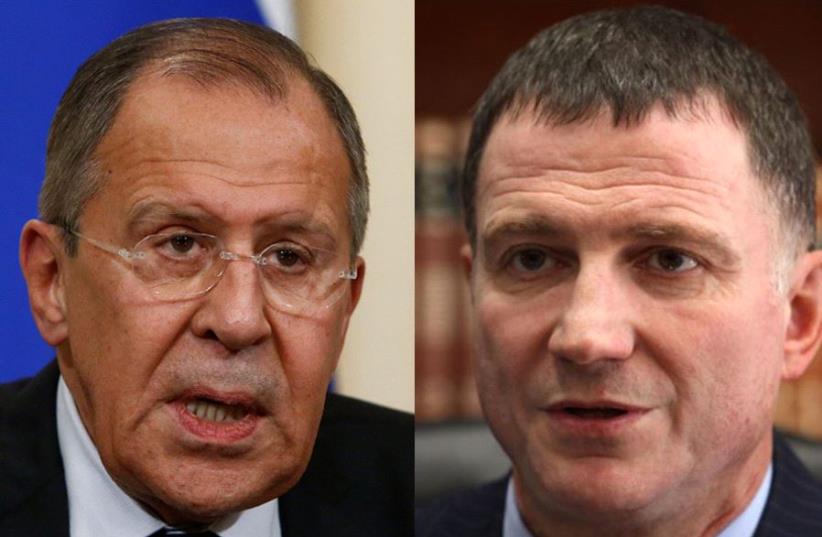 Lavrov and Edelstein
(photo credit: REUTERS,MARC ISRAEL SELLEM)
Advertisement
MOSCOW – Israel could become collateral damage to the growing tensions between the US and Russia, Knesset Speaker Yuli Edelstein said following a meeting on Thursday with Russian Foreign Minister Sergei Lavrov.“If you’re standing next to a boxing match between two heavyweights, you might get elbowed,” he quipped.Edelstein – a former refusenik who in 1984 was sentenced to hard labor – is on an official visit to Moscow, during which he addressed the Russian parliament in Hebrew, the language he had been arrested for teaching.“Israel has an interest in good relations between the US and Russia. We don’t like the militant talk,” Edelstein said. “If the US and Russia are working out their issues right on our northern border, we will be hit by the spillover. The tension is not good for Israel.”The Knesset Speaker explained that poor Russia-US relations adversely impact the war on terrorism, which he said “all reasonable countries must united to fight.”Edelstein gave Lavrov photos and biographies of Oron Shaul and Hadar Goldin, IDF soldiers whose bodies have been held by Hamas in Gaza since 2014, and of Guy Hever, a soldier who has been missing since 1997.Lavrov said he was familiar with the situation and will do what he can to help.Edelstein also spoke to Lavrov about Israel’s security concerns related to Iran and the fighting in Syria, urging him to warn Tehran against threatening to destroy Israel.“Call it a Holocaust complex if you like, but I take it seriously when someone threatens to destroy us.”He also expressed concerns about Iranian proxy Hezbollah’s presence on Israel’s border with Syria.He categorized Lavrov’s response by saying, “Russia has a different view” and that there was a “ping-pong” match of opposing views between them.Lavrov, Edelstein said, expressed concerned about Israel making retaliatory strikes against targets in Syria, but understood that Israel has security needs.“We don’t see eye to eye, but it was important to me to clarify that Israel won’t tolerate spillover into Israel,” Edelstein pointed out, adding that it was still worth presenting Israel’s stance because of the central role Russia is playing in the region.In an interview with The Jerusalem Post on how Israel maintains warm ties with Russia despite disagreements on Syria, Edelstein went into further detail: “Israel has its own redlines, and it’s not a secret that we can’t tolerating the shooting from the Syrian side into the Israeli territory, and we definitely cannot tolerate the presence of Hezbollah or Iran... and we are trying to discuss that with the Russian leadership,” he explained.“There’s a possibility for a dialogue and strategic discussions.The army is trying to coordinate immediate issues. It is our task to coordinate issues armies can’t, meaning not just an immediate tactical prevention of a clash, but what will happen next.”Edelstein said he saw his trip as a chance to show Israel’s redlines to Russia.What wasn’t on the table, however, was Russia’s lessthan- stellar human rights record.When asked about the topic, Edelstein replied, “I’m here to represent the State of Israel, and we always think about the fate of the Jewish community.”Russia has come a long way since he was a Prisoner of Zion, Edelstein noted. “There is a huge difference, and it’s not just the cell [I was in that] had 40 prisoners and now it has 20. I am talking about the open borders.“I was not trying to be a hero who overthrows the Soviet regime. I hated that regime passionately. But the thing I wanted was to leave and come to Israel and become an Israeli. And today, everyone can do so, not just Jews.“This is a difference that we always have to keep in mind, because this is something that sometimes people tend to forget,” he emphasized.As for the surreality of a former prisoner visiting the place where he was once imprisoned and having the metaphorical red carpet rolled out for him, Edelstein said he started to feel what many people told him before the trip, that this was a victory.“Everyone asks me, ‘So, did they apologize? Did they tell you they were sorry? Did they ask for your forgiveness?’ And I don’t need it. I think the very fact that I am here as the speaker of the Knesset on an official visit with a speech to the parliament... received by all the VIPs in this country. What could someone’s apology add to that? I think that the apology is that I am where I am. Instead of an apology, it’s a victory.”