Israel's life expectancy, it noted, is higher than the OECD average. Without increses in the retirement age, the report argued, people will be spending in retirement will increase 1.5 times by 2055. 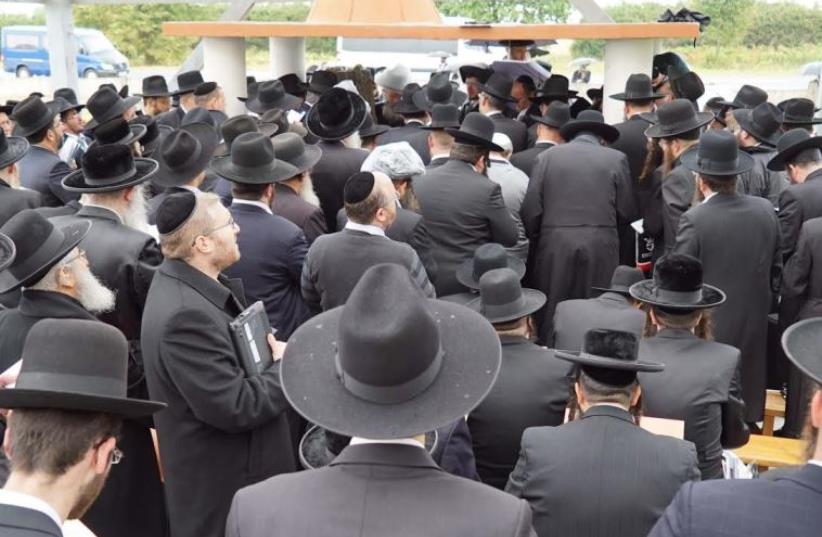 Dozens of rabbis, yeshiva deans, and leaders from the haredi community, including Rabbi Shimon Baadani, a member of the Shas Council of Torah Sages, travelled to Radun and prayed first at the building which formerly housed the yeshiva of the Hafetz Haim, and then by his gravesite itself.
(photo credit: DIRSHU)
Advertisement
Israel’s unusual demographics have created unique and daunting economic challenges, according to recent report issued by the Kohelet Policy Forum, a nonpartisan public- policy think tank.One of those challenges is the low rate of labor participation among populations with high birth rates. The birth-toworker ratio for Israeli Arabs and ultra-Orthodox Jews is of particular concern. Those numbers, if unchanged, will continue to limit long-term economic growth.In 2014, working-age non-haredi Jews in Israel were 42.6 percent of the population.By 2059, that percentage will fall to 28.4%. That means a decrease in working-age people that will compound the problems associated with the rise of low-employment demographics in the those groups.If employment trends remain steady, the decrease in the number of Israeli workers will translate into a 14.5% reduction in per-capita income.The report also cited other potential problem areas imposing potential limits on growth. Among these are public transportation, higher education and the postal system.