"The coalition deal makes us a monarchy and that is unacceptable according to our Basic Laws," says Tomer Naor of the Movement for Quality Government. 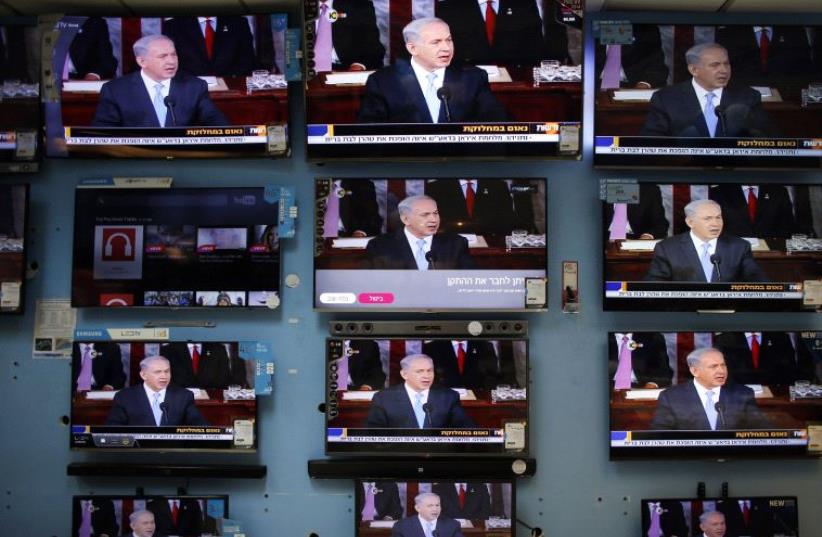 Netanyahu is seen delivering his speech to the U.S. Congress on television screens in an electronics store in a Jerusalem shopping mall March 3, 2015
(photo credit: REUTERS)
Advertisement
Prime Minister Benjamin Netanyahu’s plan to close the new Israel Broadcasting Corporation (IBC) in favor of the existing Israel Broadcasting Authority (IBA) may have hit a setback on Tuesday, when the Movement for Quality Government said the coalition agreement clause that won him support from two parties was illegal.In order to pass the plan, Netanyahu needs support from only half of the MKs in his coalition. That would obligate all coalition MKs to support it, meaning a Knesset majority.Both Yisrael Beytenu and United Torah Judaism have said they will support the plan, but only because of a clause in the coalition agreement obligating every party to back reforms made by the minister of communication, who is Netanyahu.Kulanu, Shas and Bayit Yehudi oppose the plan.The Movement for Quality Government wrote Attorney- General Avichai Mandelblit on Tuesday, asking him to cancel the communications clause because it is illegal. If Mandelblit rules in the watchdog group’s favor, the plan will not pass.“The attorney-general must cancel the clause immediately and permit the heads of the parties in the coalition to hold real deliberations on this important issue,” said spokeswoman Ruth Margolin. “The sword of the coalition agreement should not be hovering over the good judgment of the parties.”Movement attorney Tomer Naor said the clause removes from elected officials the right to make decisions on their own, by requiring them to be subservient to the prime minister on matters related to communications.He said the coalition deal cannot permit the ministers to harm the public.“The coalition deal makes us a monarchy, and that is unacceptable according to our basic laws,” Naor said. “It harms our democracy.”In a boost for the plan, Likud MK Yoav Kisch reached an agreement with the workers union of the IBA that could enable it to continue to exist.The workers union agreed to a series of cutbacks and the firing of some 300 workers, while remaining workers would take a 15% pay cut. The workers agreed to move to the facilities rented by the IBC and allow the sale of their current facilities in Jerusalem and Tel Aviv, which are much more expensive.