Rivlin: Our hearts go out to family. 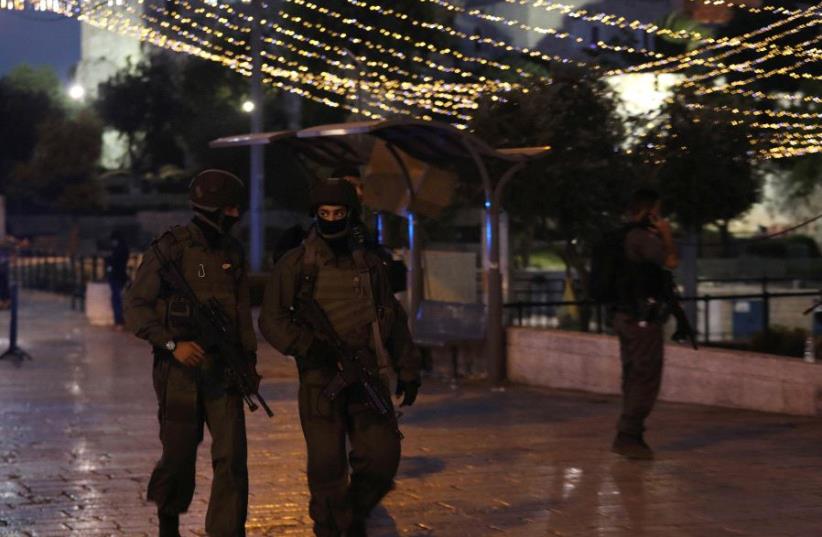 Israeli policemen secure the scene of the shooting and stabbing attack outside Damascus gate in Jerusalem's old city June 16, 2017
(photo credit: REUTERS/AMMAR AWAD)
Advertisement
President Reuven Rivlin reacted to Friday night’s terrorist attack that resulted in the death of a 23-year-old border policewoman by saying that his heart goes out of the family St.-Sgt.-Maj. Hadas Malka, whom he called a courageous warrior.“In such difficult times of deep pain, I send a big embrace of consolation to her family and wish to encourage all of her comrades who fought beside her with heroism and determination for the peace of our citizens,” Rivlin said.Defense Minister Avigdor Liberman condemned the Palestinian leadership for what he described as their “thundering silence” following the Jerusalem attack.“The thundering silence that refuses to condemn terrorism coming from the Palestinian Authority, and Fatah’s message that Israel murdered three innocent men, both prove there is no partner [for peace] on the other side,” Liberman said.Culture Minister Miri Regev (Likud) said Malka should not be considered to have been killed in a terrorist attack, but rather in battle.“She fought until her last drop of blood in the war we and the rest of the world face against murderous Islamic extremism,” Regev said.“This is a cultural and religious war that is being fought with knives and guns. Only those who recognize and fight the root of the evil can defeat it. We will win.”Opposition leader Isaac Herzog (Zionist Union) said Israel is in the midst of a new wave of terrorism, yet called for diplomatic steps to be taken.“We do not pay attention to it, but there are isolated terrorist attacks on a daily basis,” Herzog said in a speech in Ramat Yishai on Saturday. “The question is whether this reality could be changed.Terrorism has become chronic throughout the world. But I think that even in difficult times like nowadays, we must take advantage of historic opportunities to separate from the Palestinians and stop the extremism and terrorism.”Labor Party leadership candidate MK Amir Peretz said he knew Malka. He called upon Prime Minister Benjamin Netanyahu to take immediate steps to improve security.Fellow Labor leadership candidate MK Omer Bar-Lev said Netanyahu was not doing enough to protect the nation’s citizens. Candidate Avi Gabbay, a former environmental protection minister, called what was taking place “a third intifada.”Yesh Atid MK Yaakov Peri, a former director of the Shin Bet (Israel Security Agency), said the attack exhibited a new level of complexity compared to those Jerusalem has endured in recent years, because of the coordination of the shooting and stabbing, its timing, and location.“I hope this is not the start of a new wave of terrorism,” Peri said.Meretz chairwoman Zehava Gal-On criticized the government for reacting to the attack by revoking permits of Palestinians to enter Jerusalem and closing off the town from which the terrorists emerged.“Such decisions did not stop terrorist attacks in the past and will not prevent attacks in the future,” she said.Gal-On said the attack in Jerusalem proved the folly of a proposed Basic Law submitted Friday by Education Minister and Bayit Yehudi chairman Naftali Bennett that would require a special majority of 80 Knesset members to divide the city.