Israel re-opened its embassy in Cairo last September, four years to the day after a mob invaded and trashed the legation, forcing Israel to airlift its diplomats out of Egypt. 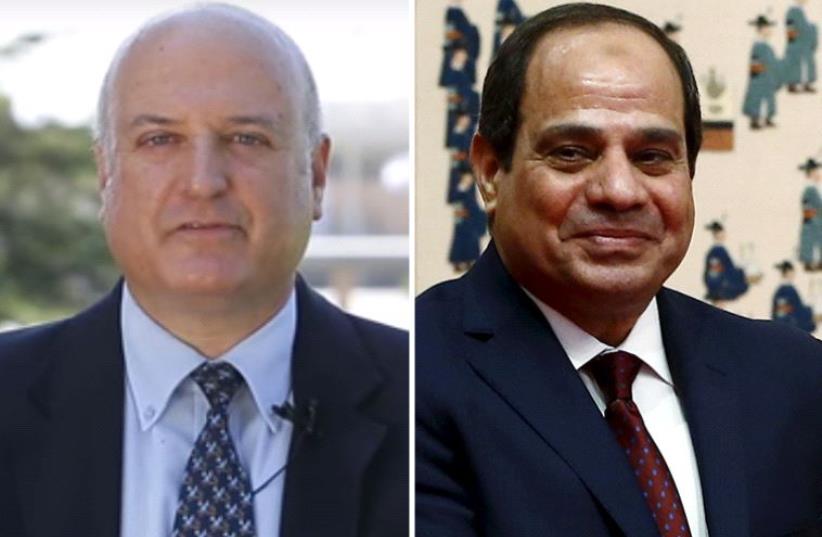 Sisi and Govrin
(photo credit: screenshot,REUTERS)
Advertisement
David Govrin presented his credentials to President Abdel Fattah al-Sisi on Wednesday, becoming Israel’s 13th ambassador to Egypt since the countries established ties in 1980.Govrin said he spoke briefly, in Arabic, with Sisi, who asked about his background and stressed the importance he places on the relationship with Israel.Govrin was one of eight ambassadors who presented their credentials on Wednesday at the Ittihadiya Presidential Palace in Cairo, the others being the new envoys from the United Arab Emirates, Somalia, Mexico, Myanmar, Netherlands, Belgium and Greece.The ambassadors waited in line – one behind the other – to present their credentials to the Egyptian president.
David Govrin, Israel"s new Ambassador to Egypt
Israel does not have diplomatic relations with the UAE or Somalia. An Egyptian army band played the Israeli national anthem.The ceremony took place in the presence of Egyptian Foreign Minister Sameh Shoukry, who visited Israel in July – the most senior Egyptian official to do so since 2007.Govrin’s formally becoming ambassador – he arrived in Egypt six weeks ago – comes during an uptick in ties between the two countries, with the Egyptians interested not only in close security cooperation with Israel, but also in wanting to play a role in pushing forward an Israeli- Palestinian diplomatic process.Egyptian Foreign Ministry spokesman Ahmed Abu Zeid was quoted by Army Radio on Wednesday saying that efforts needed to be increased with the Israelis, Russians and Americans “to encourage the two sides to return to the negotiating table.” Sisi said last week that Russian President Vladimir Putin expressed an interest in hosting talks between Prime Minister Benjamin Netanyahu and Palestinian Authority President Mahmoud Abbas in Moscow.Govrin, who speaks fluent Arabic and has a doctorate in Middle East history, takes over as ambassador after serving most recently as the director of the Foreign Ministry’s Jordan and North Africa Department, coordinating ties with the Hashemite Kingdom, Morocco and Tunisia.He served as first secretary at the embassy in Cairo in the 1990s.Govrin replaced Haim Koren, who served in the post for two years.Cairo’s current ambassador to Israel, Hazem Khairat, arrived in Tel Aviv in January, the first resident Egyptian envoy since then-president Mohamed Morsi withdrew then-ambassador Atef Salem in 2012 during Operation Pillar of Defense.Israel reopened its embassy in Cairo last September, four years to the day after a mob invaded and trashed the legation, forcing Israel to airlift its diplomats out of Egypt and plunging the two countries into their worst diplomatic crisis in 30 years.On September 9, 2011, during the height of the “Arab Spring” and half-ayear after Hosni Mubarak was overthrown, thousands of protesters stormed the embassy, using light poles as battering rams to demolish a protective wall around the compound.Six security guards took refuge in a safe room in the embassy. Egyptian commandos finally evacuated them hours later, following direct intervention from US President Barack Obama.