The minister was in Israel along with a delegation of 50 Italian academics for Italian National Day, held annually on June 2. 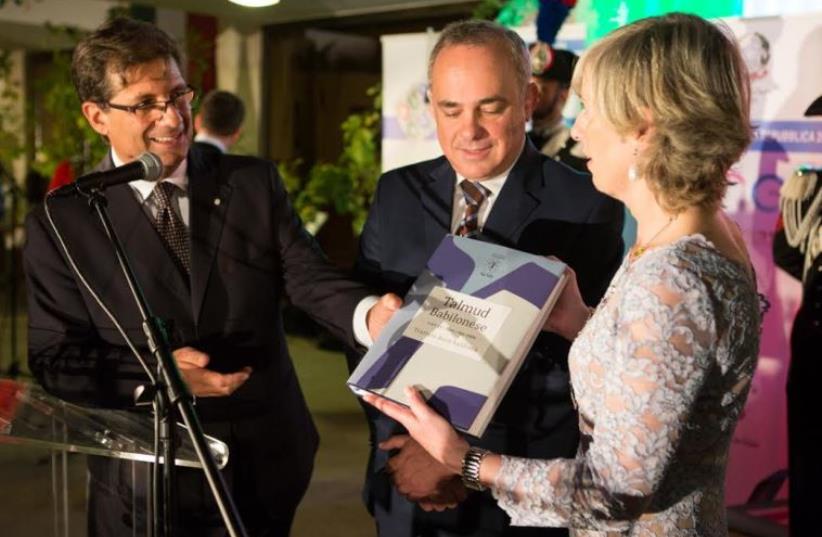 Ambassador Talo, Minister Steinitz, Minister Giannini with copy of Talmud
(photo credit: ALEX PERGAMENT)
Advertisement
Italy stands firmly against boycott, divestment and sanctions, Italian Minister of Education, University and Research Stefania Giannini told The Jerusalem Post.The minister was in Israel to celebrate Italian National Day, held annually on June 2, at a reception at the residence of Italian Ambassador Francesco M. Talo.“We are marking 70 years of the Italian Republic, a turning point of Italian history and Italian democracy,” she said.“Our fathers and our mothers decided to leave behind the period of Fascism and the dark time of racial law, and so to be here is to give a clear sign of friendship on this occasion for both Israel and Italy.”Giannini was also in Israel, along with a delegation of over 50 Italian academics, to commemorate the 15th anniversary of the Italian-Israeli Government to Government Agreement on Scientific, Technological and Industrial Collaboration, signed in Bologna in 2000 and entered into force in 2001.“We are here to renew an agreement that was signed 15 years ago, and since that time our relationship has gotten stronger and stronger,” she said.Giannini said that this research collaboration and the prominent delegation of academics and university rectors visiting Israel signifies Italy’s stance against the BDS movement.“We are the only country which officially declared its own position,” she said. “We did this both as a government with a personal letter that I signed and also with a declaration from the professors and rectors – with a strong, clear cut statement that Italy is against boycotts.”While the BDS movement has been sweeping across the US, UK and parts of Europe, it has failed to gain traction in Italy.When asked why she believed this was the case, Giannini replied that it could perhaps be attributed to the curriculum taught in Italian schools on Jewish culture and the Holocaust.“We have an education policy about Hebrew tradition and culture, and knowledge of the Shoah,” she explained.“This issue is quite present, we are one of the few countries, which has indicated by law, that one day a year is dedicated to the memory of the Shoah – on the 27th of January. This is the day where all Italian schools remember,” she said.“Secondly we are very active with trips of knowledge to Auschwitz. Once a year students go to visit a concentration camp to focus directly on the Shoah,” she added.Giannini said the Italian school curriculum engages in these activities which she believes “help the dissemination of good sentiments.”“There is good sentiment of Italians to Israel – we are aware that we belong to the same culture and the same identity,” she said. “We are from different religions but the roots are the same.”In fact, as part of her visit, the first Italian translation of the Talmud was presented to Israel at the National Day ceremony.The translation project was developed with a €5 million contribution of the Italian government and an innovative software under the supervision of Rabbi Adin Steinsaltz and Rabbi Riccardo Di Segni, the chief rabbi of Rome.While in Israel, Giannini also met with senior officials including former president Shimon Peres, Education Minister Naftali Bennett, and Science, Technology, and Space Minister Ofir Akunis, who on Sunday thanked her and the Italian government for its stance against BDS.With regards to the continued scientific collaboration, she said that the main focus of research would be centered on health, water, and renewable energy, which can benefit both countries.“Science has no boundaries. Science is blind to discrimination,” she said. “I believe we need more science, more education, more culture in order to have a better society.”