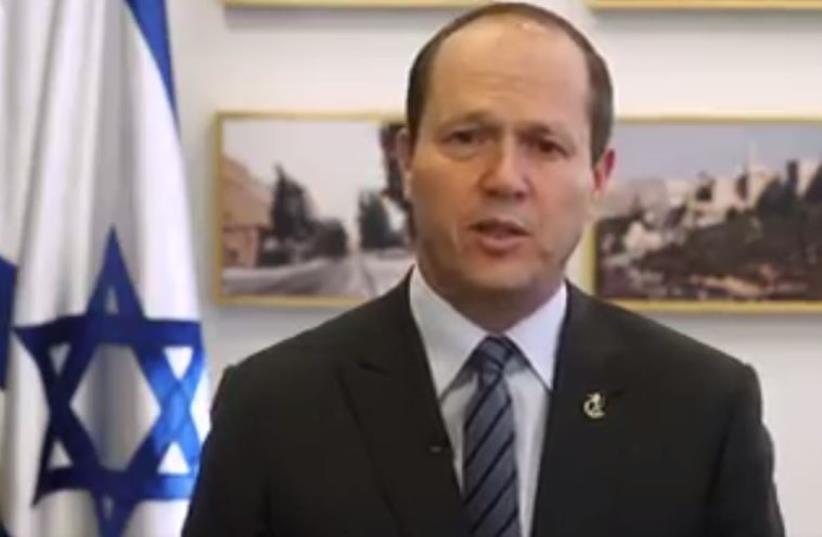 Jerusale mayor Nir Barkat announces he has registered to the Likud party in video message
(photo credit: screenshot)
Advertisement
Amid a fiscal crisis framed by threatened municipal layoffs and feuding with the Finance Ministry, the Jerusalem City Council opposition chairwoman took Mayor Nir Barkat to task on Tuesday for not submitting a budget proposal to the council for review.In a stinging rebuke, Laura Wharton, who also serves at the head of the Meretz Party, sent a letter to Barkat demanding that “he come to his senses and begin to formulate a budget proposal.”She demanded that the mayor “present to the council members and city residents the reasons for the delay.”“While [Barkat’s] out shooting videos for the Likud... and [arguing] with the finance minister and firing employees... he neglects his main responsibility,” Wharton wrote of the budget crisis, which Barkat claims necessitates an infusion of NIS 450 million from the ministry to balance. “I think the situation today, where all city employees and residents of the city live in uncertainty and fear, is intolerable.”The councilwoman added that there “is no justification for complaints by Barkat” about a lack of funding until he has formally submitted a budget.While a senior municipal official, who requested anonymity, said he understood her frustration, he claimed that she is cynically politicizing a complex financial crisis engulfing a city that has been “decades in decline.”“Unfortunately, Wharton does not share the same understanding and common [concerns] as all council members, from all sectors and factions, that the budget from the Finance Ministry will ensure the continued advancement of Jerusalem, and prevent going backwards,” the official said. “While the mayor and all the other members of the council are busy promoting the city, Wharton is quarreling with almost all members of the council and engaging in discrediting [leadership] with false, petty politics and quarrels.”