Shas MK Yoav Ben-Tzur's proposal would give the Chief Rabbinate an unprecedented say in legislation related to religion and state. 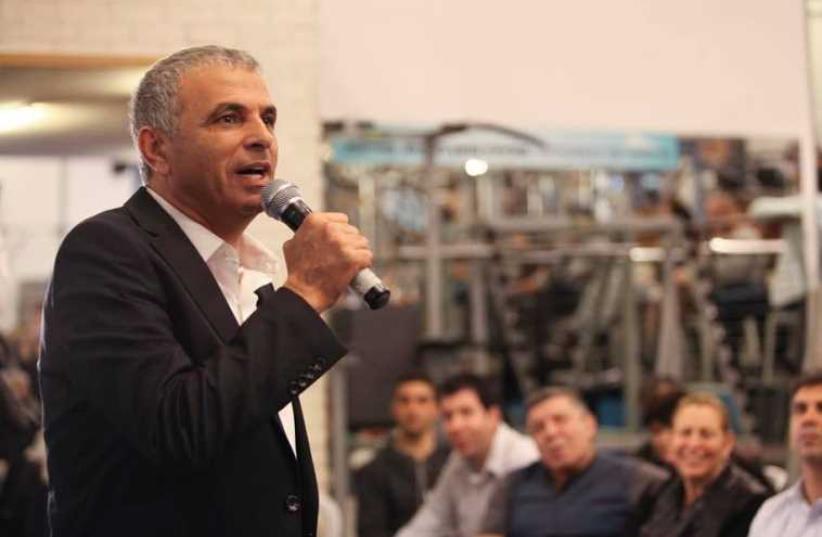 Kulanu chief Moshe Kahlon speaks to voters during a campaign stop
(photo credit: FACEBOOK)
Advertisement
Kulanu is working to block a bill by Shas MK Yoav Ben-Tzur that would give the Chief Rabbinate an unprecedented say in legislation related to religion and state, which is going to a ministerial vote on Sunday.Ben-Tzur, a close ally of Shas chairman Economy Minister Arye Deri, recently proposed legislation relating to kashrut and conversion that sparked controversy within the coalition.He added another one to the list with his initiative to amend the Chief Rabbinate Law to make “giving an opinion to the Knesset in the framework of every legislative process on the subject of religion and state” one of the jobs of the Council of the Chief Rabbinate.The initiative is co-sponsored by one MK each from United Torah Judaism (Menachem Eliezer Moses) and Bayit Yehudi (Bezalel Smotrich) and three from the Likud (Miki Zohar, David Amsalem, and Avraham Naguise).A Kulanu source said on Saturday night that the party does not like the bill and is trying to find ways to block it, pointing out that the proposal is not in any coalition agreement.MK Rachel Azaria (Kulanu) slammed the measure, indicating that it could cause tension within the coalition.“One of the most important principles in a democracy is separation of powers,” she said. “This law would blatantly harm that separation, because the chief rabbi of Israel, the head of the rabbinate, is also president of the Rabbinical Court, a judicial branch.”Azaria compared the bill to allowing the High Court to express an opinion on everything the Knesset does.“This bill wants to make the Chief Rabbinate different from every other government body and give it a special status in dealing with the Knesset.There is no justification [for this]... because beyond severely harming the status quo [on matters of religion and state], it will also severely harm democracy,” she added.MK Aliza Lavie (Yesh Atid) said the proposed amendment is redundant and shows the Chief Rabbinate’s weakness.“It’s not enough that in the current government there is a veto [power for all coalition parties] on matters of religion and state, and it’s not enough that [haredi parties] chose to deal with personal status laws of conversion and agunot in order to form the coalition now the coalition is leading legislation to allow the rabbinate to authorize or cancel bills,” Lavie lamented.“A government that wants to promote Jewish unity should not authorize this bill. Those who want to strengthen the rabbinate should not lead this process. It simply is not the way,” she said.Moshe Arbel, Ben-Tzur’s legislative adviser, said that the MKs’ criticism is irrelevant to the bill.First of all, because the rabbinate’s opinions on the bills would not be binding. In addition, he pointed out that there is precedent for this kind of advice, because all government ministries are authorized by law to give it.Arbel also said the bill would not create a problem regarding separation of powers, because there are two chief rabbis, and one is the head of the Council of the Chief Rabbinate for five years, while the other is president of the rabbinical courts, and they rotate after five years. The council will advise the Knesset, and not the rabbi helming the courts.However, both chief rabbis are members of the Council of the Chief Rabbinate for all 10 years of their tenure.“If people want a liberal and pluralist discourse, it must be truly pluralistic and allow those involved in the matter to have a voice,” Arbel said in defense of the bill.Ben-Tzur submitted the legislation in question on June 8, three weeks after Ashkenazi Chief Rabbi David Lau said at a conference of the Israel Bar Association that such a law should be passed.Justice Minister Ayelet Shaked (Bayit Yehudi), who was present when Lau made the statement and presides over the Ministerial Committee for Legislation where the proposal will go to a vote on Sunday, did not directly respond to it.Jeremy Sharon contributed to this report.