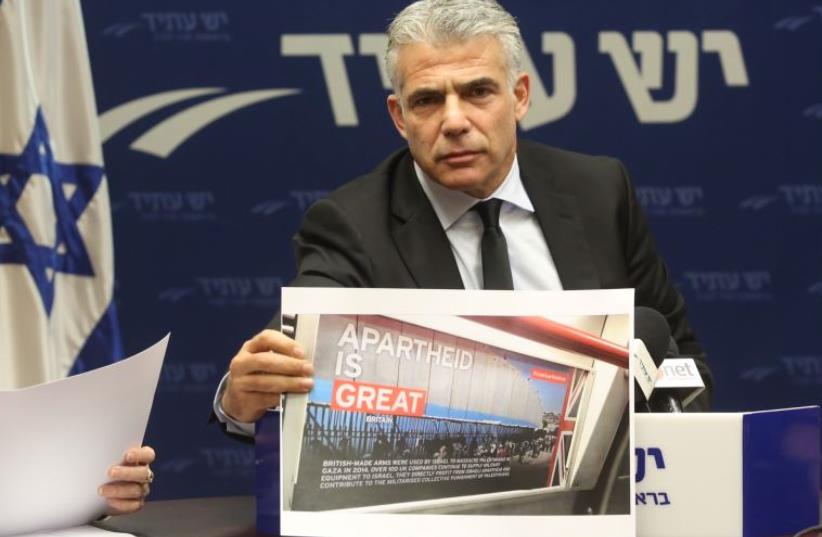 Lapid displays a picture of BDS poster
(photo credit: MARC ISRAEL SELLEM/THE JERUSALEM POST)
Advertisement
Yesh Atid leader Yair Lapid strongly condemned recent attacks on the Supreme Court, Defense Minister Moshe Ya’alon and IDF Chief of Staff Gadi Eisenkot in a speech Wednesday to the Tel Aviv Chamber of Commerce.“The poisonous attacks on the Supreme Court have crossed the line of legitimate criticism,” Lapid said. “The ministers leading the attack have had enough of obeying the law and decided to weaken the Supreme Court.”Lapid also expressly condemned statements from members of the coalition he considered racist.“Instead of the leadership displaying confidence and calm, it is being dragged behind the most extreme elements,” Lapid said.“Knesset members are making disgraceful, racist statements which were common in Germany in the 1930s. It’s dangerous. Israel has enough external enemies, and we cannot afford a political leadership which fans the flames instead of acting responsibly to calm the situation.”Addressing the attacks on Ya’alon and Eisenkot after the shooting incident in Hebron, he said, “The violent attacks on the chief of staff and defense minister over the incident in Hebron undermine the resilience of the IDF and harm our national security. The ongoing attacks by Breaking the Silence and the Haaretz newspaper on Zionism and the morality of the IDF has turned them into tools for the BDS [Boycott, Divestment and Sanctions] movement.”