Loss and frustration – an intimate look at Hadar Goldin’s parents

With grace and warmth, the Goldins gave this writer a tour of their home and, in doing so, exposed some of their grief and heartache – and hope. 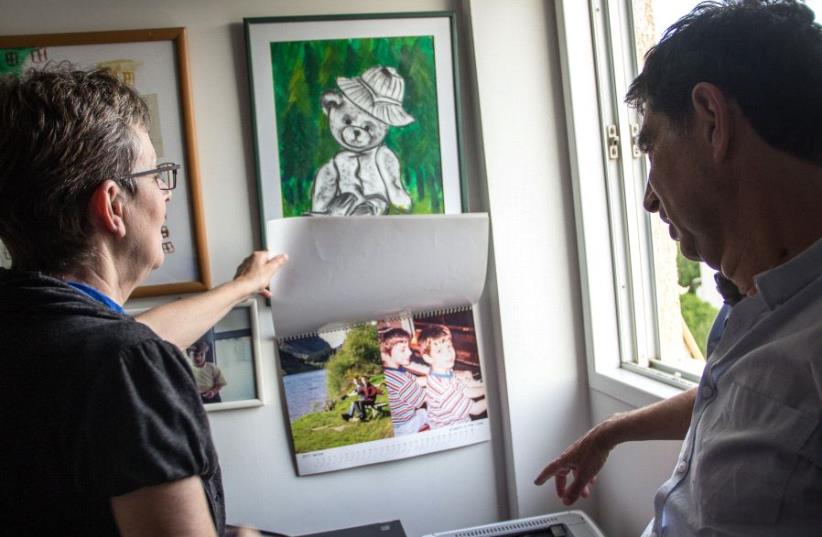 Looking back on happier times. A photo on a 2010 wall calendar showing twins Hadar and Tzur as children playing the piano, and as teens.
(photo credit: LAURA BEN-DAVID)
Advertisement
Simcha and Leah Goldin’s beloved son, Lt. Hadar Goldin, was killed on August 1st 2014.Two hours after Hamas agreed to a cease-fire in the Gaza war known in Israel as Operation Protective Edge, Hamas terrorists ambushed his unit from a tunnel located in the basement of a house in Gaza. They dragged his body into an underground tunnel deep into Gaza, where it continues to be held hostage by Hamas to this day.A visit to the Goldin’s warm and immaculate Kfar Saba home provides a glimpse into the depth of the loss, as well as the overwhelming frustration that they, as parents, must suffer each day that they continue to wait for the chance to give their son a proper burial.Their home is like a museum dedicated to the art and accomplishments of their talented children.Hadar’s paintings as well as those of his twin brother Tzur, grace the walls in every room. In fact the sheer volume of Hadar’s art and writings are astonishing for his 23 short years.With grace and warmth, the Goldins gave this writer a tour of their home and, in doing so, exposed some of their grief and heartache – and hope.The fact that the Goldins remain in this limbo is unconscionable and is a matter that is a basic humanitarian issue. Hadar, as well as Sgt. Oron Shaul, another IDF soldier killed by Hamas during the same defensive war against the terrorist group, should be returned to their families and provided a proper burial. We cannot rest until these soldiers can be properly laid to rest in Israel, and their families can finally grieve in peace.Holding Hadar's copy of Moshe Chaim Luzzatto’s book, “Mesilat Yesharim” (The Path of the Just). Throughout the book, in Hadar's impossibly beautiful handwriting, is his own interpretation of the ethical text. Now Simha, Hadar's father, is working hard to publish his son's interpretation.HADAR AND HIS twin brother, Tzur, were close. Not long after Hadar was killed, someone pointed out the space between the brothers in this photo looks remarkably like the State of Israel. The symbolism wasn’t lost on Hadar’s family, who knew that just as in the photo, Israel was part of the glue that bound them to each other.The view out Hadar's bedroom window is a cruel joke for the Goldins; for there is the Kfar Saba military cemetery which contains Hadar's grave, but not his body.​Simha and Leah Goldin with a photo of Hadar doing one of the activities he loved - painting - his last piece before he was killed.The author is a writer, photographer and social media/marketing professional.