Rachel Azaria’s bill comes hot on the heels of a ruling by the High Court of Justice last week, which ruled that independent authorities cannot even give the impression of being kosher to customers. 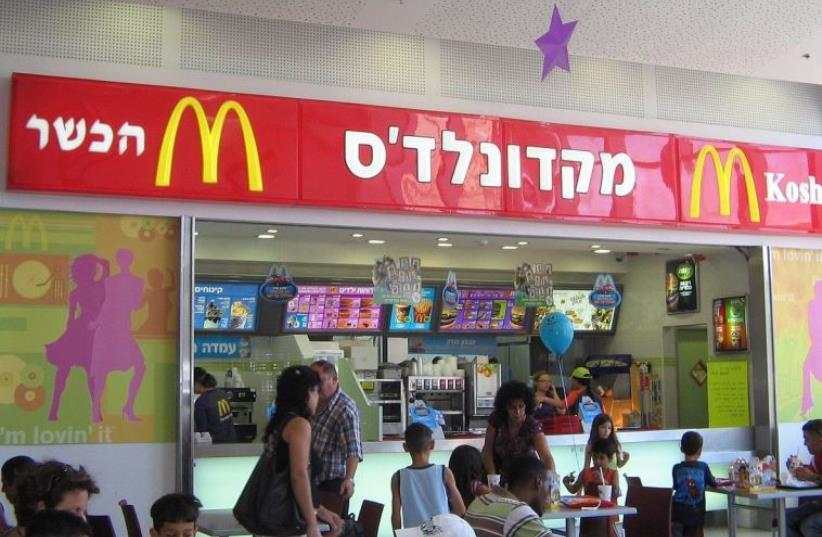 Kosher McDonald's in Asheklon, Israel
(photo credit: Wikimedia Commons)
Advertisement
Kashrut legislation proposed by Kulanu MK Rachel Azaria, designed to allow independent kashrut authorities to operate while turning the Chief Rabbinate into the industry regulator, is set to come before the Ministerial Committee on Legislation on Monday.At the same time, a separate bill on kashrut proposed by Bayit Yehudi MK Betzalel Smotrich – which is intended to unify kashrut standards, create different levels of rabbinate kashrut certification and introduce professional standards for kashrut supervisors – is also scheduled for debate in the committee.Azaria’s bill comes hot on the heels of a ruling by the High Court of Justice last week, which not only upheld the state’s position that independent kashrut authorities cannot use the word kosher in writing, but also ruled that they cannot even give the impression of being kosher to customers.Azaria’s legislation is designed to overturn the current model for kashrut supervision, in which the Chief Rabbinate and its regional branches issue kashrut licenses to restaurants and other food businesses, provide the kashrut supervisors to such businesses, and provide the inspectors to oversee the supervisors.The MK observes in her bill that, under the current circumstances, “the Chief Rabbinate is the only body in the state that acts as a regulator and inspector.”The bill would allow independent kashrut authorities to be set up which would then be able to issue kashrut licenses to any business interested in their services. A committee consisting of one of the chief rabbis, municipal chief rabbis, female halachic advisers, and public representatives would determine which kashrut authorities would be empowered to issue kashrut licenses.Azaria said the rabbinate’s “kashrut monopoly” in Israel has led to increased costs for consumers and to a lack of faith in its services.“Many businesses report that kashrut supervisors don’t really turn up to supervise, and the kashrut-observant public, including rabbis and Chief Rabbinate officials don’t really trust rabbinate kashrut licenses, which are obligatory by law,” said the MK.She said that her law would break the monopoly and allow for competition between different kashrut authorities, thereby improving kashrut services and prices.The Ne’emanei Torah Va’avoda national religious lobbying group, which helped draft Azaria’s bill, said that despite last week’s ruling upholding the Chief Rabbinate’s position, the High Court had highlighted severe deficiencies in its kashrut services.It said “the change will be expressed through fair competition among kashrut authorities, which will benefit consumers and improve the quality of service.”It is likely, however, to face severe opposition from the Chief Rabbinate, as well as coalition parties United Torah Judaism, Shas and Bayit Yehudi.Smotrich’s bill, supported by Chief Rabbis Yitzhak Yosef and David Lau, would leave the Chief Rabbinate’s control over kashrut licensing intact, but would establish unified standards for kashrut licensing across the country.Smotrich’s bill would authorize the Council of the Chief Rabbinate to issue unified kashrut standards which would be applicable across the country. It would also provide different levels of kashrut which can be issued by authorized rabbis to different food businesses and products in order to increase consumer choice, and provide the option of a more stringent level of kashrut for those who desire it.The legislation would also allow for the revocation of a municipal chief rabbi’s authority to issue kashrut licenses if he fails to adhere to the new standards, a procedure which would be performed by a committee appointed by the Council of the Chief Rabbinate.It is possible that both proposed laws will be sent to a new internal coalition committee on religion and state issues, set up following the addition of Yisrael Beytenu to the government, for further deliberation.