Bar spoke to lawmakers around the world about his plan to bring about a two-state solution. 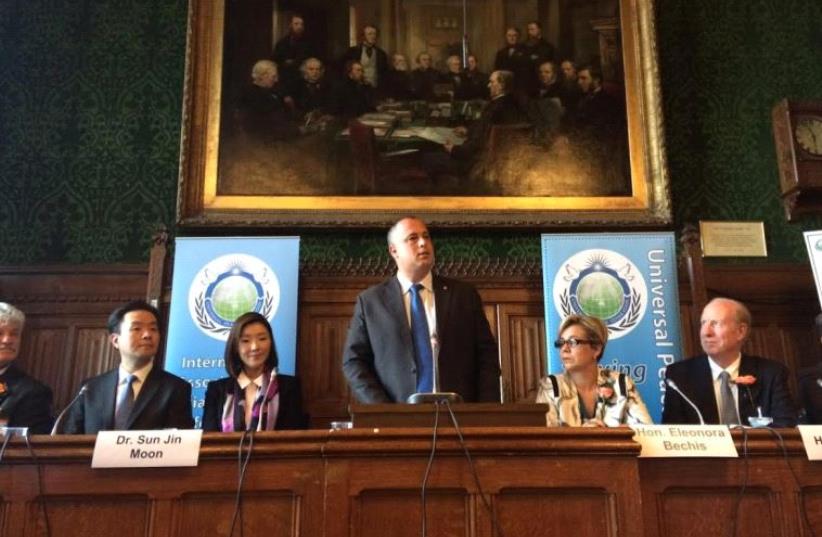 Deputy Knesset Speaker Hilik Bar (Zionist Union) speaks at a conference of the International Association of Parliamentarians for Peace.
(photo credit: COURTESY HILIK BAR)
Advertisement
Deputy Knesset Speaker Hilik Bar (Zionist Union) presented his peace plan in the UK House of Commons to lawmakers from around the world at a conference of the International Association of Parliamentarians for Peace.“I was happy to have the opportunity and the honor, which I don’t take for granted, to present my diplomatic plan in one of the most important parliaments in the world,” Bar said Sunday. “I will continue acting to prevent a binational state and promote separation from the Palestinians towards a two-state solution.”Bar presented his ideas and the Labor Party platform on a two-state solution on Friday to the conference, where he was warmly received, and gave an overview of the diplomatic and security threats and challenges Israel faces.The International Association of Parliamentarians for Peace is part of the Universal Peace Federation, an organization that advises the UN on issues relating to peacemaking. The organization also promotes education for peace, interfaith dialogue, and a marriage-friendly, family-oriented culture. The Labor MK’s visit to Westminster was part of a long series of presentations to legislatures and universities that have invited him to discuss his plan since he presented it in the Knesset in July 2015, including the European Parliament and several state legislatures in the US, as well as Harvard University.Bar’s diplomatic outline calls for Israel to recognize a Palestinian state. Borders would be determined based on pre-1967 lines, with land swaps to account for settlement blocs, and the two sides would negotiate on Jerusalem, security arrangements, the refugee issue, etc.The recognition and approval of “Palestine” joining UN institutions will be conditioned on it not undermining the need to negotiate, and the Palestinians recognizing Israel.The plan also provides that, when there is a Palestinian state, Jews may securely live in it as residents or citizens, thus creating an option for Israelis not to be expelled from their homes, an issue that Prime Minister Benjamin Netanyahu brought up in a controversial online video on Friday.Palestinian citizens would have “privileged access” to places of worship, tourism, academia and trade in Israel, and vice-versa.The outline also deals with Israel’s relations with Diaspora Jewry. It says the government should give world Jewry an “advisory status on issues of national importance and matters of foreign policy” and educate them in Hebrew, Jewish history and Zionism, to strengthen their Jewish identity while still promoting the Zionist idea of “the negation of the Diaspora” and encouraging them to move to Israel.