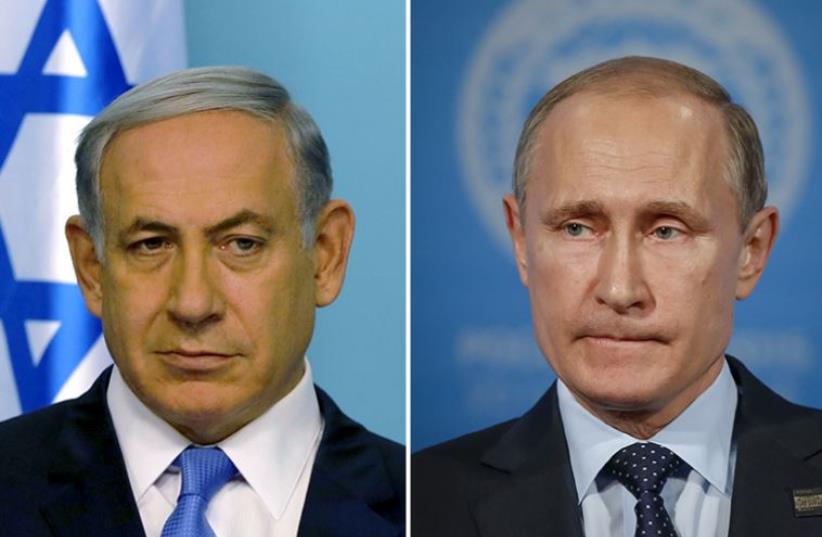 Netanyahu and Putin
(photo credit: REUTERS)
Advertisement
The deepening ties between Israel and Russia are important for the country’s security, Prime Minister Benjamin Netanyahu said Sunday as he addressed a Jerusalem Day ceremony on the eve of his Monday departure to Moscow.On Tuesday he will hold his fourth face-to-face meeting with Russian President Vladimir Putin in less than a year to strengthen military cooperation between the two countries and to celebrate 25 years of diplomatic relations.On the day that marks the unification of Jerusalem during the 1967 Six-Day War, Netanyahu could not help but reflect on what an enormous difference time makes in the relationships between nations.Back then, he said, the Arab armies that surrounded Israel bent on destroying it, were supported and funded by the former Soviet Union.Russia today is a world power and its relation to Israel is only growing stronger and deeper, Netanyahu said.These ties are important “for our national security and prevented unnecessary violence along our borders,” Netanyahu said.Earlier a statement from the Prime Minister’s Office said that the two leaders would discuss terrorism, the ongoing Syrian civil war and the stalled Israeli-Palestinian conflict. Russia has an active military presence in the region, particularly in Syria and it is also an arms supplier to Iran.It is also one of five permanent members of the United Nations Security Council.Israel has worked to strengthen its ties with Moscow, alongside those of its chief ally, the United States, whose President Barack Obama, Netanyahu has met only once in the last year.It has worked to coordinate its military air activity in the region with Russia, so that the two militaries do not interfere with one another in the Syrian theater.Coordination between the IAF and the Russian air force continues to be good, due to the need by both countries to avoid inadvertent incidents in the crowded air space over and around Syria. Coordination between the defense establishments of Jerusalem and Moscow has been positive and fruitful, with hotlines in place that have been used to keep Russian and Israeli air platforms out of one another's way. Russia continues to provide air support to the Assad regime and its Hezbollah and Iranian backers on the ground. Although Moscow has reduced the number of fighter jets it keeps deployed in Syrian air bases on the Mediterranean coastline, it still keeps its air force active in the war torn country. Despite the fact that Moscow is working closely with the Iran-led axis, which includes Israel's most bitter, formidable enemy in the region - Hezbollah - Russia's presence has proven to be a moderating, restraining influence on Hezbollah's conduct vis-a-vis Israel. Nevertheless, Russia is completing the sale of the advanced S-300 advanced surface to air missile defense system to the Iranians, which will significantly upgrade their ability to defend their nuclear sites against any future attack. The arrival of the F-35 jets later this year from the US, will go a long way to assisting Israel in building up capabilities to overcome such systems, as well as the advanced air defense systems that Hezbollah has managed to smuggle into Lebanon from Syria. Netanyahu travels to Moscow with his wife Sara, Agriculture Minster Uri Ariel and Jerusalem Affairs Minister Ze’ev Elkin, who emigrated to Israel from the former Soviet Union.In honor of the 25th anniversary, Putin has signed a presidential decree to return to Israel a tank which has been in its armory museum that was used in the 1982 battle of Sultan Yacoub, from which three Israeli soldiers are still listed as missing.During the visit the Israeli delegation will look to increase cooperation with Russia with regard to the economy, trade and culture.During the visit the two countries will sign a pension agreement to award benefits to immigrants from the former Soviet Union who worked in Russia prior to 1992. The signatures will not fully end the protracted bureaucratic process and payments are not likely to being until 2017.Jerusalem and Moscow will also sign an agricultural memorandum of understanding with regard to dairy farming.Netanyahu will inaugurate an interactive experiential exhibit on Israeli technology. He will also meet with Jewish communal leaders, including Russia's Chief Rabbi Berel Lazar, Chief Rabbi Pinchas Goldschmidt Moscow and the Russian Jewish Congress President Yuri Kanner.Separately, while Netanyahu is in Russia, US Ambassador Daniel Shapiro will meet with the Bayit Yehudi faction to discuss US-Israel ties, including issues relating to the ongoing negotiations of a new ten-year Memorandum of Understanding that would provide Israel with military aid.