PM responds to critics who said bill gives primacy to Jewish citizens, saying that “there is no contradiction at all between this bill and equal rights for all citizens of Israel.” 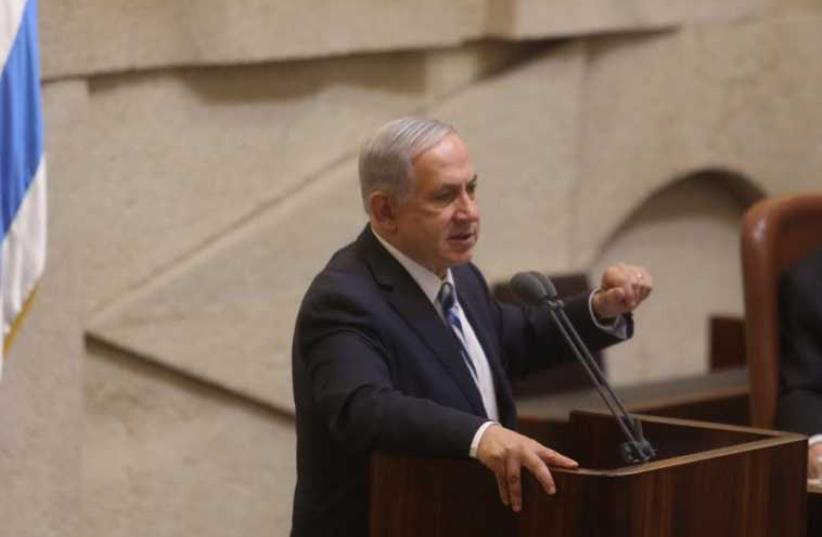 Netanyahu speaking at Knesset, May 4, 2015
(photo credit: MARC ISRAEL SELLEM)
Advertisement
Prime Minister Benjamin Netanyahu called Sunday for the controversial bill “Basic Law: Israel as the Nation-State of the Jewish People” to be legislated faster than planned.Last week, the Ministerial Committee for Legislation approved the bill proposed by MK Avi Dichter (Likud) and the Knesset voted for it in a preliminary reading. At that point, the bill was supposed to be put on hold for 60 days, while the government came up with its own version to merge with Dichter’s.However, in Sunday’s meeting of coalition party leaders, Netanyahu called to accelerate the process and waive the waiting period.The prime minister said the Jewish nation-state bill will continue on the private legislation path, so that it can be passed into law faster, without the government bill.Last week, Netanyahu threw strong support behind the bill, calling for “all Zionist parties” to support it.The legislation states that Israel is the nation-state of the Jewish People and includes details like the national anthem, the flag, and that Jerusalem is the capital. It also includes a controversial article stating that Hebrew is “the state’s language” and Arabic has a special status.Netanyahu responded to critics of the bill who said it gives primacy to Jewish citizens, saying at two separate occasions that “there is no contradiction at all between this bill and equal rights for all citizens of Israel.”On Wednesday, Joint List chairman Ayman Odeh came out against the bill, saying that “no apartheid law, racist and ultra-nationalist as it can be, will erase the fact that two nations live here.“This extreme-right-wing government is trying to light a fire of nationalist hatred here, but I still believe that there is a majority here that wants to live in peace, equality and democracy, and that majority must get up now to fight determinedly against this dangerous government,” Odeh added.