Netanyahu: Israel’s security will improve as a result of Trump meeting

“There is a joint strategic understanding and deep friendship,” Netanyahu said. 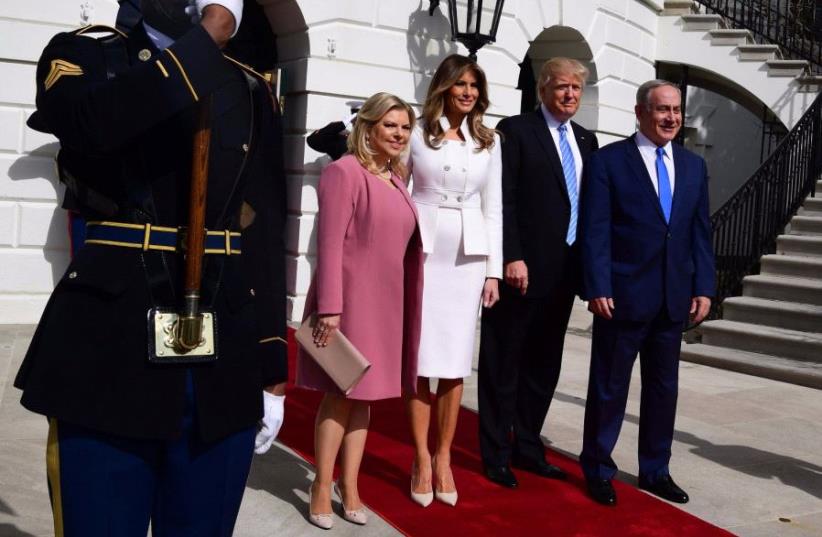 From Right: Sara Netanyahu , Melania Trump , Donald Trump and Benjamin Netanyahu outside of the White House on Feb. 15, 2017
(photo credit: AVI OHAYON - GPO)
Advertisement
Israel’s strategic security interests in the region will be improved as a result of Wednesday’s meeting with US President Donald Trump, Prime Minister Benjamin Netanyahu said after returning to Israel on Friday afternoon from a three-day trip to Washington D.C. “It was an excellent meeting. It will have a large impact on our security,” said Netanyahu. He added that he believed that as a result of the meeting and the Trump presidency in general, US-Israel ties which are already strong, will be vastly improved. “There is a joint strategic understanding and deep friendship,” Netanyahu said as he spoke with reporters on the plane moments before landing.Netanyahu said that there will be joint follow-up meetings between his staff and members of the Trump Administration.
Trump tells Israel to "hold back on settlements" during meeting with Netanyahu at White House on Feb. 15, 2017 (credit: REUTERS)
Netanyahu and Trump have known each other since the 1980s. The trip, however, marked the first time they had met since Trump became president last month.Trump greeted Netanyahu as an old and dear friend, hosting him in Blair House, and lauding him as a smart and good leader.The tone was markedly different from the acrimony that always seemed to follow Netanyahu’s meetings with former US president Barack Obama. They were particularly at odds over the best strategy for preventing Iran from producing nuclear weapons.It is a subject on which Netanyahu and Trump see eye-to-eye, and which they discussed at length in Washington.In an interview with MSNBC before leaving Washington on Thursday, Netanyahu said, “there was a great sense of kinship and friendship [with Trump] and that is something that the people of America feel toward the people of Israel and the people of Israel feel toward the people of America. In many ways we mirror each other and share the same values of freedom and democracy. Israel is the only true democracy in a troubled region and Americans know it.”Settlement activity, however, remained a source of tension between the two governments.On the plane before landing, Netanyahu reiterated that a joint mechanism would be set up to come to an understanding between Israel and the US with regard to settlement activity.To MSNBC, he said that the broader question should be how to achieve peace.