No Israeli prime minister has ever addressed a formal European Union body. 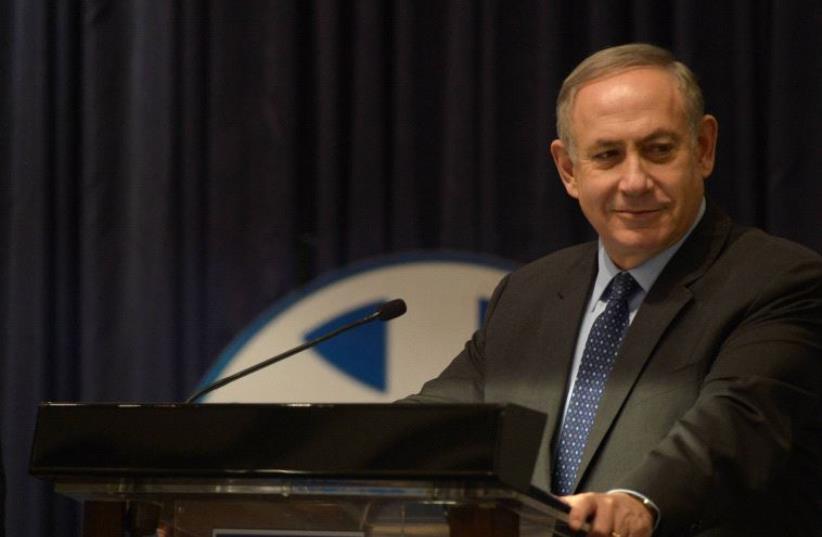 Benjamin Netanyahu at the conference of Israel ambassadors and heads of missions in Europe in the Foreign Ministry in Jerusalem
(photo credit: AMOS BEN GERSHOM, GPO)
Advertisement
Prime Minister Benjamin Netanyahu has accepted an informal invitation from Lithuania to visit the EU in Brussels on December 11, making him the first Israeli prime minister do to so in 22 years.The visit is an initiative of the Lithuanian government, which has been in discussions with Israel about ways to improve Israeli-European Union ties.The Lithuanian government plans to issue a formal invitation to Netanyahu to meet with the EU’s 28 foreign ministers at the breakfast that is traditionally held prior to the ministers’ monthly meeting on foreign affairs.As a member state, Lithuania can issue the invitation without going through the office of EU foreign policy chief Federica Mogherini and without the approval of the other member states.Mogherini’s office did not confirm the meeting, stating that the schedule was still in flux.“The agenda is still under preparation, and the side events are still under preparation,” Mogherini’s spokeswoman Maja Kocijancic said.The visit comes as tensions are high between Israel and the EU over the IDF’s demolitions of Palestinian homes in Area C of the West Bank and increased Israeli settlement activity in that region this year.The EU-Israel Association Council, the main vehicle for joint ministerial dialogue, has not met since 2012, even though such a meeting had been scheduled for this past February.In spite of assurances by Israeli and European officials that the gathering will occur, no new date for the meeting has been set.Already in March, Estonian Foreign Minister Sven Mikser told The Jerusalem Post that EU frustration over Israeli settlement activity had delayed the meeting.Lithuania, which has very strong diplomatic ties with Israel, is also among those countries that believe the council should meet.While visiting Israel in September, Lithuanian Foreign Minister Linus Linkevicius told the Post that the EU had to talk.“We have to exchange positions, which is not the case so far, and [has not been] for a long time,” Linkevicius said.The breakfast meeting is not intended to replace the long-anticipated gathering of the EU-Israel council. Lithuanian hopes that an informal conversation with Netanyahu and EU ministers would help improve ties between Israel and the member states.No Israeli prime minister has addressed a formal EU body, and this includes the council of foreign ministers.While EU diplomats frequently visit Israel, Israeli prime ministers, who often visit Europe, have not made their way to Brussels to meet with top EU officials.The last such visit was in 1995, when Shimon Peres, who was foreign minister and acting prime minister, visited Brussels.The visit “is extremely important because it is a unique occasion to meet 28 foreign ministers as well as the important actors of the EU in Brussels,” Foreign Ministry spokesman Emmanuel Nahshon said.Netanyahu will be able to “present Israel’s position with regard to the strategic challenges and issues that we face in the region,” Nahshon said.“It is a unique occasion to strengthen and enhance the ties between Israel and the EU. I think that it is going to be one of the more important diplomatic rendezvous for Israel,” he said.In 2016, President Reuven Rivlin addressed a plenary session of the EU Parliament and met with EU leaders.Two years ago the possibility was raised that both Netanyahu and Abbas should address the EU heads of state, but the plan never came to fruition.Netanyahu’s visit also comes as he is in the midst of a major diplomatic drive to sway the EU and five of the six world powers – Great Britain, Germany, France, China and Russia – to take diplomatic action against Iran.Both Netanyahu and US President Donald Trump oppose the deal that the six world powers, including the US, worked out with Iran in 2015 to curb Tehran’s nuclear program.The EU supported and continues to support the deal. Mogherini spoke in support of the deal just last week.Netanyahu holds that a series of safeguards must be in place in addition to the deal, to improve inspections, prevent Iran from developing nuclear weapons in the future and to halt its ballistic missile program.