Netanyahu to Kerry: World must condemn Palestinian lionizing of terrorists

'Israel and the United States are united in grief,' the premier said at the start of his meeting with Kerry in New York. 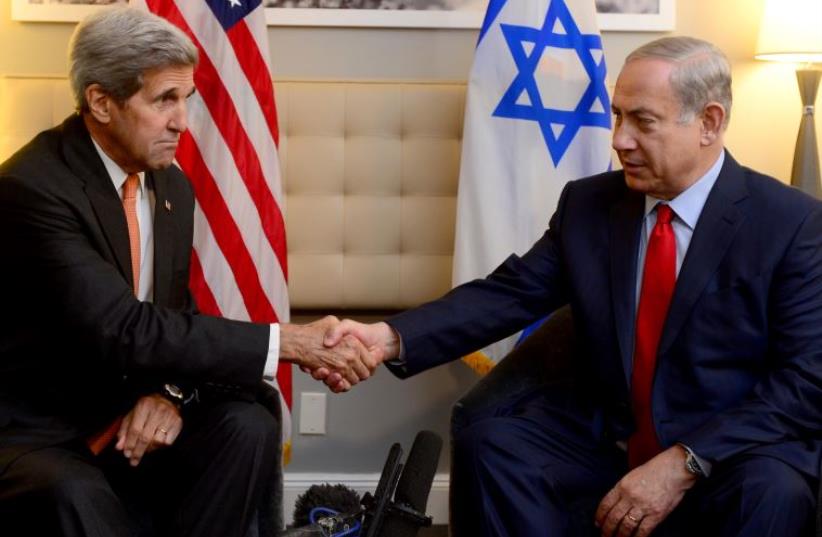 US Secretary of State John Kerry (L) and Prime Minister Benjamin Netanyahu meet in New York
(photo credit: AVI OHAYON - GPO)
Advertisement
The Palestinian leadership's condoning of terrorism and its praise for those who kill Israeli civilians should be condemned internationally, Prime Minister Benjamin Netanyahu said at the start of his meeting with US Secretary of State John Kerry in New York on Friday.In a brief statement to the press, the premier expressed condolences to the family of the murdered Israeli settlers in the northern West Bank on Thursday while also mentioning the massacre of nine people at an Oregon college by a gunman."Israel and Americans are united in grief," Netanyahu said. "Palestinian terrorists murdered yesterday a young father and mother, leaving four little orphans. The gunman brutally murdered nine innocent Americans."A cell affiliated with Fatah’s armed wing assumed responsibility for the murder of an Israeli couple near the West Bank settlement of Itamar.The Abdel Qader al-Husseini Brigades, a group affiliated with Fatah’s Al-Aqsa Martyrs’ Brigades, announced on Friday that its men on Thursday night opened fire on the car of Eitam and Na’ama Henkin, a couple in their 30s, while they were driving home with four of their six children, aged four months to 9 years, from Hebron. The children were not wounded in the attack.Netanyahu said that "the path forward requires one thing - you have to fight terror." "Fanaticism, zealotry is there," the premier said. "When we hear incitement and praise for terrorists from supposed peace partners, we say, 'Cut it out'."Calling on the international community to condemn the shooting, Netanyahu said: "I want to make this clear: We’re going to fight these terrorists in ways they will understand so that terrorism won't be worthy."The secretary said reiterated American condemnation for the shootings near Nablus on Thursday, saying that he looked forward to taking "constructive steps forward" in hopes of minimizing violence in the region.Netanyahu's meeting with Kerry is the first such meeting between officials at the highest levels of government in both Israel and the US since the signing of the Iran nuclear accord, a deal which was assailed publicly by the Israeli leader.JTA contributed to this report.