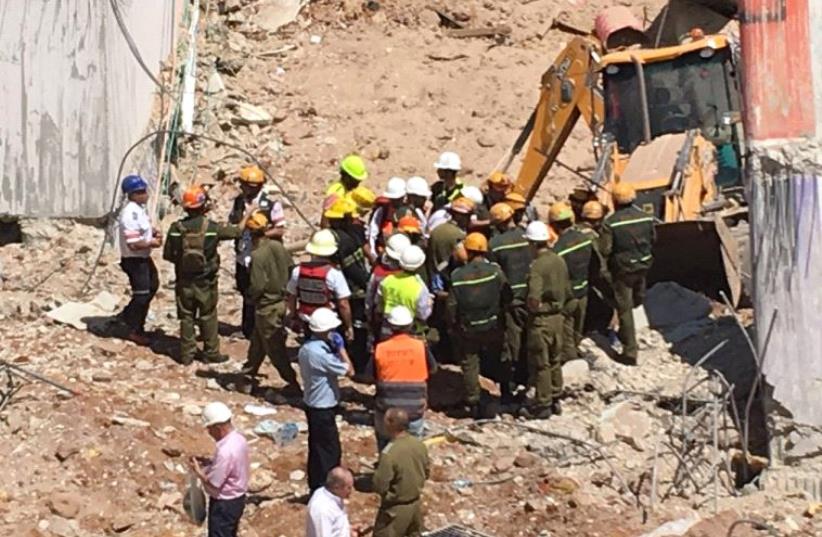 Scene of building collapse in Tel Aviv's Ramat Hachayal neigbourhood.
(photo credit: IDF SPOKESMAN’S UNIT)
Advertisement
A law passed in July will temporarily close the Tel Aviv construction site where a crane fell on Monday causing two deaths and dozens of injuries.The law requires the closure for at least two days of any site at which someone has died or sustained a serious injury due to an accident.The legislation allows an inspector to keep the site closed for at least three more days if security at the area has not improved.An owner of the site who does not fix security problems may face two years in prison and a fine of NIS 75,000.Construction workers will continue to draw a salary for days on which the site is closed, according to the law, which was drafted by Knesset Labor, Welfare and Health Committee chairman Eli Alalouf (Kulanu) and others, following a series of meetings on construction site accidents.The committee said the economy minister does not complete investigations or properly penalize owners of unsafe construction sites.It also pointed to a lack of police training to identify safety violations.The ministry employs 17 supervisors with five cars for 13,000 construction sites around the country, numbers the committee found sorely inadequate.The State Attorney’s Office does not indict violators or pass information on to the Economy Ministry, according to the committee.It also noted a lack of transparency and cooperation dealing with safety at construction sites between the police, the State Attorney’s Office and the Economy Ministry.The Knesset Research and Information Center found that half of all workplace accidents in Israel were related to construction.Of those, 70 percent were caused by falling from a height or being struck by a moving item.The National Insurance Institute spends NIS 4.4 billion per year on matters related to work accidents. The cost to the economy of work-related accidents is about NIS 10b. per year.Alalouf called an urgent meeting of his committee to discuss Monday’s tragedy, and said he will ask for in-depth explanations from all relevant parties as to how it could have happened.Joint List chairman Ayman Odeh visited some of the injured in Tel Aviv’s Ichilov Hospital.“The never-ending accidents at construction sites are not our fate,” he said, “they are the direct result of our government’s total abandonment of safety and the lives of the workers. Since the beginning of this year, 32 laborers were killed. We cannot accept this situation.”Odeh called for a commission of inquiry on construction accidents.The chairman of the Knesset Caucus on the Status of the Working Man, Amir Peretz (Zionist Union), said that there are seven times more deaths from construction accidents in Israel than in the UK.Peretz called the accident at Assuta a result of “harmful employment that tries to cut costs in every way, including in safety, and under-supervision by government offices. It is clear that in a place where laborers fall to their death, cranes will fall, as well.”