Gov. Andrew Cuomo, along with a delegation including fashion designer Kenneth Cole, are on a whirlwind three-day tour of Israel. 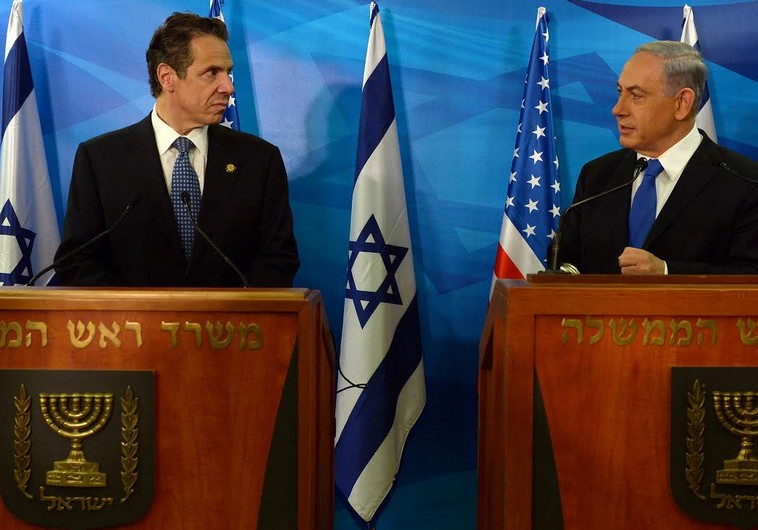 New York Gov. Andrew Cuomo, accompanied by Senate Majority co-leaders Dean Skelon and Jeff Klein and Assembly Speaker Sheldon Silver, called on President Reuven Rivlin on Wednesday to affirm the State of New York’s support for Israel in light of the continued threat of attacks by Hamas and other terrorist organizations.The unity group, as it calls itself, came to Israel on a 36-hour visit at the invitation of Consul-General in New York Ido Aharoni, but made it clear that with or without the invitation, Israel could rely on the New York to stand with it in solidarity.The unity group made clear it was pleased to be able to give these assurances to Israeli leaders in person in Israel. Klein, the grandson of Holocaust survivors, said it was especially meaningful to him.This is Cuomo’s fourth trip to Israel, and is somewhat of a family affair. Aside from the bipartisan political aspect of the visit, the delegation includes several business people and a huge Big Apple press corps.One of the business members in the delegation is Cuomo’s brother-in-law Kenneth Cole.Cole is an iconic, Brooklyn- born, world famous fashion designer who is Jewish and married to Cuomo’s sister Maria.Cole’s younger brother Neil, who heads the Iconix Brand Group, a successful fashion licensing and marketing company is also a member of the delegation. Also on board are Mortimer B. Zuckerman, executive chairman of Boston Properties, publisher of the Daily News, and chairman and editor- in-chief of US News and World Report; and Howard Maier, chairman emeritus of the Holocaust Memorial and Tolerance Center of Nassau County.When introduced to the sartorially splendid Cole, Rivlin said: “All the ladies of Jerusalem are talking about you.”In expressing appreciation to Cuomo for the visit, Rivlin emphasized that Israel did not seek the military campaign in Gaza, nor does Israel seek war.Israel has no fight with the Palestinians or with Islam, he said, adding that Israel’s trouble is the terrorists.“We have a duty, not only a right, to protect our people” he said.Referring to negotiations taking place in Cairo with a view to obtaining a permanent cease-fire, Rivlin said: “We don’t know yet if there will be an end to the fighting, but we are sure that if we are forced to another round that you will support us against terrorism.”Rivlin asked Cuomo to convey Israel’s deep gratitude to US President Barack Obama for the efforts that he and Secretary of State John Kerry are making to bring about an end to the crisis.“We know you’re going through a difficult time,” Cuomo responded, saying that the delegation he had brought with him shows New York’s bipartisan solidarity with Israel.The US has always been a strong ally of Israel on many levels, and will continue to be so, he said.He made the point that the State of New York with a Jewish population of 1.7 million, the largest Jewish population outside of Israel, has a special connection with Israel.Even though everyone wants peace, Cuomo said, “We understand your need and right to defend yourself.”Rivlin was the first Israeli dignitary to meet the delegation that continued from the President’s Residence to the Prime Minister’s Office for a meeting with Prime Minister Binyamin Netanyahu.Netanyahu thanked Cuomo for his solidarity visit and stressed the similarities the US and Israel face in their battles against radical Islam.“Just as you wouldn’t put America and ISIS on the same moral plane, you’d never put Israel and Hamas on the same moral plane.Remember that Hamas celebrating 9/11; they celebrated the murder of thousands of innocent people, including thousands of New Yorkers.They celebrated!” said Netanyahu.Cuomo added that the US, and especially New York, has always been a strong ally of Israel.“As New Yorkers, we have many connections, family connections, cultural connections, historic connections, so our relations go very deep. And I speak for all New Yorkers when I say: We stand in solidarity with Israel.The fight that you fight is the fight against terror,” he said.Before returning to New York on Thursday, the delegation will travel to the South to gain an understanding of the proximity of Israel and Gaza, and how dangerous this is for both sides without a cease-fire.
Advertisement
Subscribe for our daily newsletter