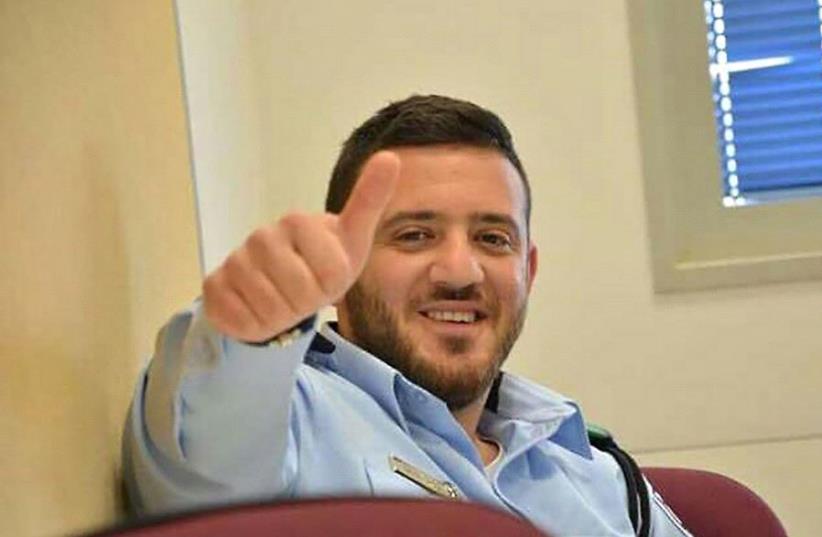 Police officer Kaamil Shanan
(photo credit: ISRAEL POLICE)
Advertisement
Thousands of family members, friends, political dignitaries and others gathered Friday to mourn Border Police officers Haiel Stawi and Kamil Shnaan, who were killed in a terrorist attack near the Old City’s Lions’ Gate.Stawi, 30, the father of a three-week-old boy, was buried in the northern Druse village of Maghar. Shnaan, 22, the son of former MK Shakib Shnaan, was buried in the nearby Druse village of Hurfeish.According to police, Stawi enlisted in the Border Police in 2012 and served in the Temple Mount Unit. Shnaan, who reportedly was to wed in a week, joined the Temple Mount Unit seven months ago to become a career officer.Both men, who were buried within hours of each other, were posthumously promoted to the rank of advanced-staff-sergeant-major.Public Security Minister Gilad Erdan, Police Commissioner Roni Alsheich, Jerusalem District Police commander Yoram Halevy, senior police officers, ministers, members of Knesset and dignitaries from the Druse community attended the funerals.During Shnaan’s ceremony, Alsheich praised his service and bravery in one of Israel’s most volatile geopolitical settings.“Only last December you were conscripted, and you have become a loved one,” said Alsheich.“While you were on duty, terrorists who were inside the Temple Mount compound shot at you and your friends. You have served in the most sensitive place in the world, where a supreme effort was made to preserve human dignity and freedom of worship.”Alsheich continued: “I promise that we will not allow any extremist ideology to break Israeli society, and we will continue to work hard against extremists and against terrorism.”Shortly thereafter, the police commissioner addressed Stawi’s family.“Tragically, we are burying two sons of the Druse community today,” he said.“There is no need to elaborate on the dedication of this community to the State of Israel – its love of the security service and police service, in particular. We send them a warm, strong and loving embrace, and pledge to always be with you at your side for support and strength.“Just as Haiel became part of the police family overnight, so did you become part of us – an inseparable part of the Israel Police family.”Prime Minister Benjamin Netanyahu and Israeli officials from across the political spectrum came together on social media to mourn the loss of both men.“One of the policemen who was murdered in this horrible terrorist attack was the son of a friend,” MK Merav Michaeli tweeted of former Labor MK Shakib Shnaan.Education Minister Naftali Bennett noted the strong bond between the Druse community and Israel.“The Jewish people is connected in a covenant of life with our Druse brothers,” he wrote on Twitter, posting an image of Israeli and Druse flags together.On Twitter, former Maj.- Gen. Noam Tibon noted the bravery of Druse soldiers and officers and their “great contribution to the defense of Israel during my long years in the IDF,” adding: “I embrace the Shnaan and Stawi families following the loss of their sons.”Finance Minister Moshe Kahlon wrote on Twitter that his “heart is with the families of the officers, our heroic Druse brothers, who were murdered in this despicable attack.”