Netanyahu deplored efforts to explain Arab terrorism as a result of despair and frustration during a speech at a ceremony marking the 100th birthday of former prime minister Yitzhak Shamir. 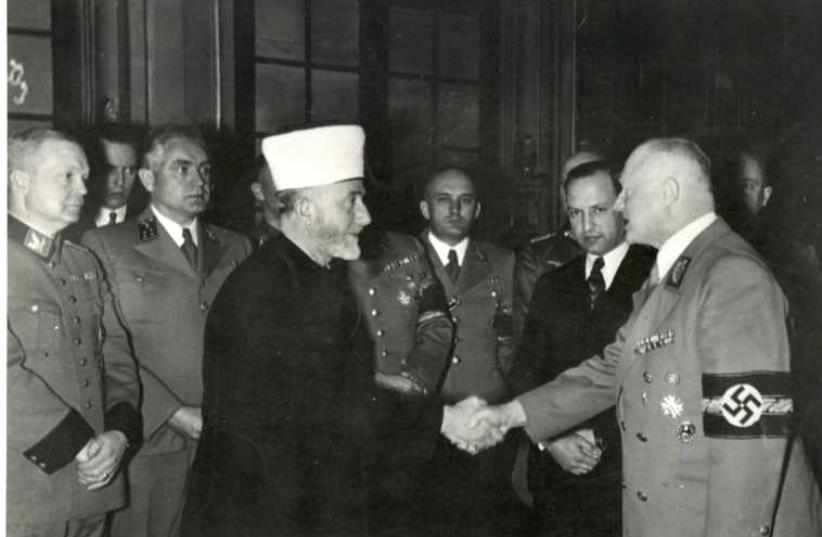 Amin al-Husseini, the mufti of Jerusalem, meets German Foreign Minister Joachim von Ribbentrop in Berlin, November 20, 1941.
(photo credit: JEWISH AGENCY)
Advertisement
A straight line leads from the provocations of Jerusalem’s Mufti Haj Amin al-Husseini who incited against Jews in the 1920s to the “wild incitement” today that motivates the current round of terrorism, Prime Minister Benjamin Netanyahu said on Sunday.Netanyahu, who sparked an uproar in October when he said that al-Hussein planted the idea of the final Solution in Hitler's mind, a position he then clarified later, brought up the mufti again during a speech at a ceremony marking the 100th birthday of former prime minister Yitzhak Shamir.Shamir, Netanyahu noted, saw the periodic bursts of terrorism that also plagued his tenure as prime minister as a continuation of the Arab hatred and violence that extended back to the wave of Jewish immigration to Palestine in the 1920s.Shamir, Netanyahu said, noted that the violence and killing was done out of an “appetite for destruction.”“The first wave of terrorism in the 1920s, when my grandfather immigrated to Israel, was nourished by the claim of Mufti Haj Amin al-Hussein that the Jews were going to destroy the al-Aksa Mosque and build a third temple in its place,.” Netanyahu said, asking if that “sounds familiar.”“The incitement continues,” he said, “and the waves of terrorism come and go, come and go.”Netanyahu deplored efforts to explain Arab terrorism as a result of despair and frustration. “The despair and frustration is not from an inability to build,” he said, “but rather despair and frustration at an inability to destroy.”Netanyahu said that saying terrorism is a result of despair and frustration absolves the Palestinians of responsibility for their actions, “for their terrorism that has accompanied us for almost 100 years.” This terrorism, he noted, predated the creation of the state, as well as the Six Day War and the settlements. The terrorism, he noted, takes place when there is a peace process, and when there is not.“We did not give into terrorism during Shamir's days, and it is clear we won't today either,” he said. The hope, he said, rests not in creating illusions, but rather through strength that will lead the other side to understand that they cannot defeat Israel.