Waszczykowski, who formerly was the Polish ambassador to Iran, is making his first visit to Israel since taking office in November 2015. 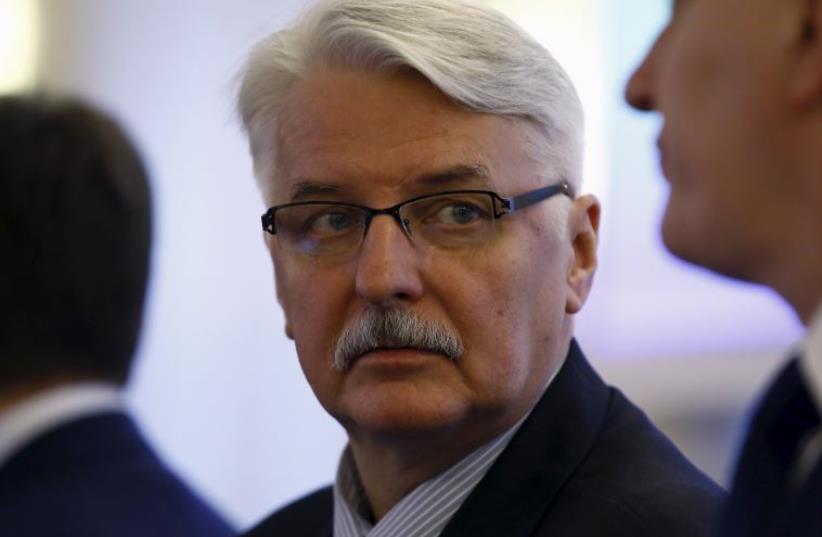 Poland’s Minister of Foreign Affairs Witold Waszczykowski
(photo credit: REUTERS)
Advertisement
Polish Foreign Minister Witold Waszczykowski is arriving Tuesday for a three-day state visit during which he will meet with Prime Minister Benjamin Netanyahu and other high ranking Israeli officials.The visit will focus on bilateral issues with the aim of enhancing bilateral cooperation, said Polish Ambassador Jacek Chodorowicz, who referred to Israel as “our friend and significant partner in the Middle East.”Among the issues Waszczykowski will discuss will be the agenda of the government-to-government meeting slated to take place in Jerusalem in the fall with the participation of the heads of both governments as well as senior ministers from both countries.Waszczykowski, who formerly was the Polish ambassador to Iran, is making his first visit to Israel since taking office in November 2015. In addition to a parley with Prime Minister Netanyahu, he is scheduled to meet with Cabinet Minister Tzachi Hanegbi and Foreign Ministry Director-General Dore Gold.Waszczykowski will be accompanied by a delegation including chairman and vice-chairman of the Polish-Israeli Parliamentary Friendship Group, and the director of Warsaw’s Jewish Historical Institute.In Jerusalem, the group will visit the graves of soldiers and civilians who arrived in British Mandate Palestine during the Second World War as part of Gen. Władysław Anders’s Polish Army in Exile. More than 120,000 Polish soldiers and their families, among them many Jews, traveled from the Soviet Union, via what was then Persia and Iraq, to join the British forces stationed in the Middle East. It was a journey fraught with danger, tension, physical exertion and lack of hygiene, as a result of which many of the soldiers succumbed to exhaustion or disease. “This is why we have a cemetery with Polish graves in Jerusalem,” said Chodorowicz.As is the custom among visiting dignitaries, Waszczykowski will visit Yad Vashem, where he will lay a wreath in remembrance of the victims of the Holocaust. Of the six million Jews who perished during World War II, half were Polish citizens.While at Yad Vashem, he will also honor the 6,600 Poles awarded the title of Righteous Among the Nations.Although Jewish life in Poland will never be as rich as it was prior to the Nazi Holocaust, the country has experienced a resurgence of Jewish identity and culture since the Communist regime fell in 1989.“Today, Poland boasts a small but vibrant Jewish community,” said Chodorowicz. “There is a feeling of investment in the future of Jewish life in Poland. with many non-governmental organizations such as the JCC and the Taube Foundation operating in our country.” Chodorowicz also noted the annual Jewish culture festival in Krakow is the largest such event in the world, attracting thousands of Jews and non-Jews from around the globe.Chodorowicz further noted that Waszczykowski’s visit comes in the midst of efforts by the international community to recreate conditions that will allow the revival of peace talks between Israel and the Palestinians.Poland was among the 29 parties to the June 3 Paris conference that sought to find a new entry point for meaningful negotiations, Chodorowski continued. “Warsaw has a special friendly relationship with Israel, and it will remain so.We are committed to Israel’s security and to the two-state solution,” he stated.Poland and Israel resumed diplomatic relations 26 years ago after the fall of Soviet bloc. Israel is one of Poland’s major political and economic partners in the Middle East. Bilateral trade reached $1 billion in 2015.