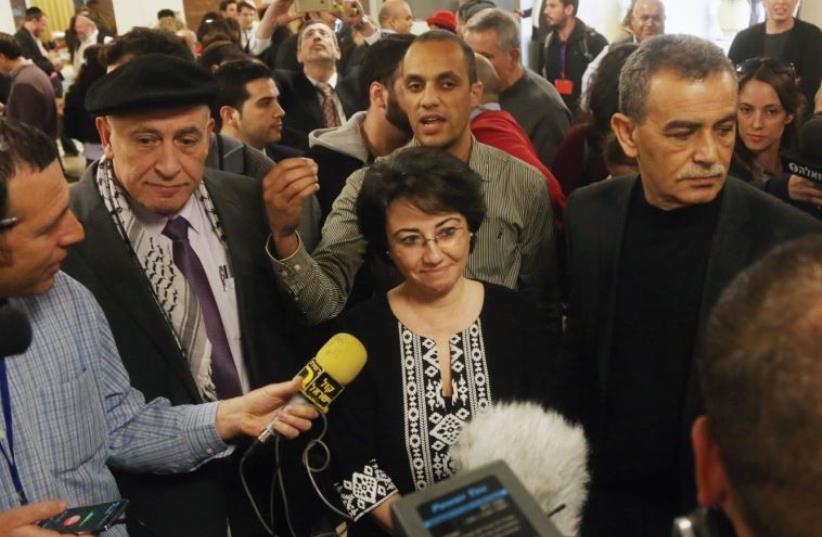 KNESSET MEMBER Haneen Zoabi speaking with the press last year. Her party colleague Basel Ghattas has decided to join the Gaza flotilla
(photo credit: MARC ISRAEL SELLEM)
Advertisement
The results of Balad’s recent internal election for members of its central committee could bode poorly for the futures of MKs Haneen Zoabi and Basel Ghattas.The Israeli-Arab nationalist party’s seventh conference, held in Shfaram in the Western Galilee, revealed that the party’s voters are sending a strong message against the faction led by former party head and member of Knesset Azmi Bishara, who fled to Qatar in 2007 after being accused of spying for Hezbollah, reported exclusively by Israel Radio’s Eran Singer on Thursday.Zoabi and Ghattas and their supporters suffered losses in the central committee election.Singer told The Jerusalem Post that Balad voters “are fed up with the activity and conduct of some of its leaders, particularly Zoabi and Ghattas, which are part of the ‘Bishara faction.’ “In other words, the message to Bishara is that we can no longer tolerate your interference with Balad work inside of Israel when you are outside,” he said.However, beyond the Jewish- Arab angle, the real conflict being played out in the party, which Singer sees as the major catalyst, is between those supporting Syrian President Bashar Assad and those supporting the rebels.“The Syrian war is majorly affecting Israeli-Arab politics,” he said, noting that Bishara had been a great supporter of Assad, but today he is sitting in Qatar, which is Assad’s No. 1 enemy.Later on Thursday, the Israeli- Arab website Kul al-Arab reported that Bishara said he is cutting ties with Balad because of the results of the central committee vote.The Balad voters are “not committed to the old faces and know well how to punish their leaders,” said Singer, adding that the party has a democratic mechanism in which voters can express themselves.The Syrian war has divided opinion among Israeli Arabs.Balad, established in 1995, has a pan-Arab nationalist ideology similar to that of Assad’s Ba’ath Party. Religious identity is much less emphasized than the Arab one, which historically has allowed minorities such as Christians and Alawites to take part so as to downplay their religious differences.Bishara’s support for Qatar’s agenda has created internal conflict within the party.For now, though, they do not face any immediate risk because Balad MKs are chosen by Balad voters, not the central committee.A knowledgeable source from the Arab sector confirmed the report to the Post, saying the election result “was a big blow to the Bishara-Zoabi- Ghattas faction.”The Post contacted the offices of Zoabi and Ghattas, and Zoabi’s office responded that “this is a non-story” since the voting for the central committee “has nothing to do with the Knesset list.”“People vote for the central committee based on various reasons.”Heba Yazbak, who was placed fourth in the Balad central committee election told the Post that there was not an extraordinary internal struggle within the party but “a natural struggle like in any party.”“The elections results show a normal and healthy process in Balad, having young leaders in the front is a strength point for the party’s future and continuity,” she said.Balad head Jamal Zahalka, who placed the highest on the central committee election out of all Balad MKs, refused to comment.