President meets with Republican congressional delegation a week after having met with Democratic delegation, giving an almost identical speech. 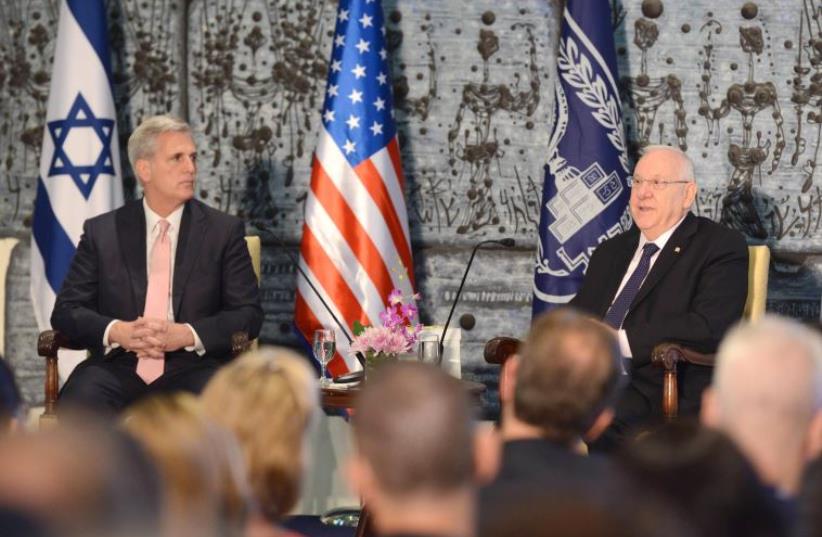 President Reuven Rivlin meets congressional delegation
(photo credit: Mark Neiman/GPO)
Advertisement
There was no need for any member of Israel’s leadership who met with a 37-member Republican congressional delegation led by House Majority Leader Kevin McCarthy to make a case against the Iran deal.It would have been preaching to the converted.Speaking to reporters before the delegation’s meeting with President Reuven Rivlin on Tuesday, McCarthy, who represents a California district, made it clear that he and fellow Republicans are not convinced that the deal holds water.Rivlin made no reference to Iran until half-way through his address to the visiting politicians. The president delivered almost exactly the same speech that he had made the previous week to a delegation headed by House Minority Whip Rep. Steny Hoyer (D-Maryland).The difference between the two speeches was that in the address to the Democrats, Rivlin quoted former president John Kennedy. In the speech to the Republicans, he quoted president Ronald Reagan.The delegation, which is in Israel under the auspices of the American Israel Education Foundation (AIEF) – a philanthropic organization affiliated with AIPAC – included freshman and sophomores in addition to seasoned politicians.The AIEF brings delegations of Democrats and Republicans to Israel every two years.Just as Hoyer had done before him, McCarthy assured Rivlin of the unbreakable bond that has existed between the United States and Israel since 1948, and highlighted shared values of freedom, liberty, democracy and human rights.“We don’t want anyone to question the strength of that bond, which is getting stronger,” McCarthy said.He said that Americans are aware that the region is not a safe place and that members of the delegation had seen this for themselves when touring the country and observing the proximity of borders.Rivlin said that together with Israelis from all sides of the political spectrum, he was deeply concerned about the nuclear deal signed with Iran because the regime in Tehran acts with “a dangerous combination of aggressiveness, fundamentalism and state-supported terrorism,” which – even without nuclear weapons – threatens freedom and democracy in the region and around the world.“We fear that this agreement is a first step to legitimize Iran’s polices and strategies which will lead to acts that will further destabilize an already chaotic region and the whole world,” said Rivlin.Even if the deal goes ahead, it does not leave Israel defenseless, the president was quick to assert. “As a strong democratic country in the region, Israel will do all that is necessary to defend itself. In this crucial time, all Israelis know that Israel does not stand alone.Our allies – and specifically the US – are a strategic cornerstone for us and we know that very well. The US-Israel relationship has had its ups and downs, and we must not be alarmed by disagreements when they come up,” he said.Discussing the upcoming congressional vote on the Iran deal, Rivlin said: “Whatever Congress decides, it will be your decision as representatives of the American people. We as your allies and partner must make sure that whatever the result of this vote, our strategic alliance stands and grows even stronger. Israel cannot become a divisive issue in American politics.”On Tuesday, three Republican congressmen, comprising a separate delegation organized by the Israel Allies Foundation, met with Prime Minister Benjamin Netanyahu to discuss the Iran nuclear deal.The legislators traveled to Egypt before Israel in an effort to learn about opposition to the deal and cooperation between Israel and its neighbors against shared threats from jihadist groups.Rep. Trent Franks (R-Arizona), co-chairman of the Congressional Israel Allies Caucus, told The Jerusalem Post ahead of the meeting with Netanyahu that he wanted the prime minister to “understand in the deepest, most personal and professional way how committed many of us in Congress are, not only to the protection of Israel in the long run, but to the defeat of the onerous and dangerous Iran nuclear deal in the short run.”Franks added that Netanyahu’s speech to both houses of Congress earlier this year was one the greatest speeches of his lifetime. “I only wish that our president had the same depth of understanding that Mr. Netanyahu does about the core dynamics of the Middle East and the parties involved,” he lamented.Franks said that many members of Congress are “brokenhearted about our president’s failure to recognize the time-honored relationship between America and Israel that does not reflect the Congress or the people of the US, who still have the greatest affection for the people and the State of Israel.” “Anything I do to protect the State of Israel is in the best interest of my own children and the peace and security of the entire human family,” Franks stated.The other members of the delegation were Rep. Keith Rothfus (R-Pennsylvania), Rep. Evan Jenkins (R-West Virginia) and his wife, Elizabeth Jenkins.The Israel Allies Foundation is an umbrella organization of 33 pro-Israel from caucuses around the world, and the Congressional Israel Allies Caucus is the only bipartisan pro-Israel caucus in the US Congress. Its four chairmen: Franks, Rep. Dough Lamborn (R-Colorado), Rep. Eliot Engel (D-New York) and Rep. Brad Sherman (D-California) – have all come out against the Iran deal.Knesset Foreign Affairs and Defense Committee chairman Tzachi Hanegbi (Likud) said he anticipates Congress voting down the Iran nuclear deal against the wishes of the Obama administration.“I’m convinced that the American Congress will reject by a large majority the nuclear agreement with Iran,” MK Tzachi Hanegbi (Likud) said. “There is an abundance of explanations and reasons as to why the agreement weakens the United States.”Hanegbi told Israel Radio that the government in Jerusalem was urging members of Congress to view the agreement through the prism of “what was good for their country, not Israel.”

Ariel Zilber contributed to this report.
Advertisement
Subscribe for our daily newsletter