As the "immunity bill" to protect Israeli PMs continues to spark controversy, Prime Minister Benjamin Netanyahu's saga with the police grabs the focus. 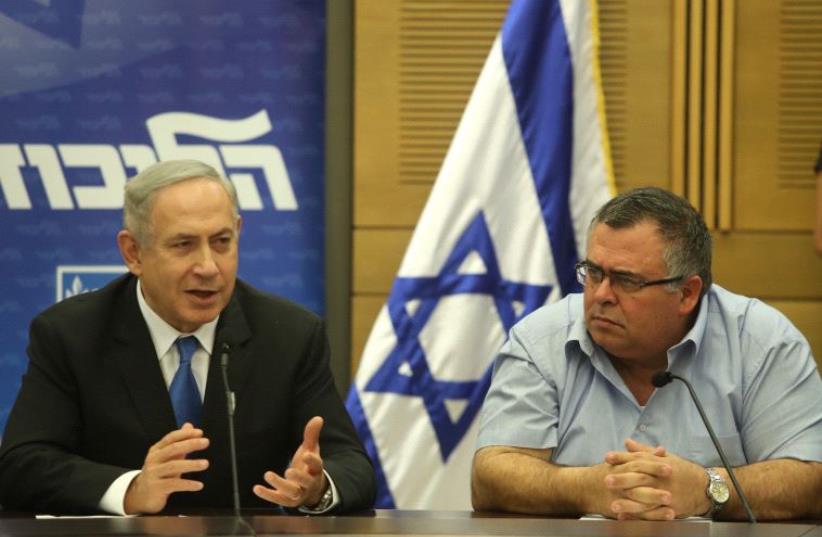 Prime Minister Benjamin Netanyahu and Likud MK David Bitan.
(photo credit: MARC ISRAEL SELLEM/THE JERUSALEM POST)
Advertisement
JERUSALEM- Two of Prime Minister Benjamin Netanyahu's closest allies have initiated legislation in what opponents say is a rearguard action to try to shield him from a police probe into corruption allegations against him.Netanyahu is a suspect in two cases, one into alleged meddling in the media industry and the other into gifts he received from rich businessmen. He denies any wrongdoing. But, if charged, he would come under heavy pressure to resign or could call an election to test whether he still had a mandate.Two lawmakers who want Netanyahu to stay in power have proposed two new draft laws that have alarmed the attorney-general and the police.One would bar police from providing prosecutors with the investigators' conclusions on whether charges should be brought against suspects. The second, known as the "French Law" because of similarities with legislation in France, would delay any investigation of a prime minister until he or she leaves office.Netanyahu, a right-wing leader now in his fourth term, has said he has no interest in promoting personal legislation, but he has not ordered his coalition head, David Bitan, and his co-sponsor of the bills, David Amsalem, to withdraw the bills.Bitan said that once police publish their findings, suspects are convicted in the court of public opinion even if they are eventually cleared. Those who oppose the draft bills are more worried about toppling Netanyahu than about democracy, he said."They (the bills) protect democracy. Suspects have rights too," Bitan told Reuters.The "French Law" has not yet been brought before parliament. Coalition partners are at odds over its phrasing but Bitan says he will not shelve the legislation.The bill, he said, would not apply to the present investigations against the prime minister. But if passed, it could potentially affect any future legal moves affecting Netanyahu in at least one other case in which he is currently not a suspect."NOT INNOCENT"Parliament passed the first draft in an initial reading this month but both drafts may ultimately fall through before being written into law. The "French Law" would not apply to any investigations under way, but the other proposed law would.In comments leaked to the media, Attorney-General Avichai Mandelblit complained about "a multitude of proposals that are meant to harm us all".Lawmakers and cabinet ministers have a right to propose bills, he said in remarks broadcast on Army Radio. But, in comments suggesting they were politically motivated, added that "this batch is not innocent"."I'm being attacked on all fronts with means that are not within the rules of the democratic game," Mandelblit said.Police also said, in a statement to Reuters, that they had come under pressure from politicians."Police will keep with its determined fight against crime and corruption, keep serving the public and will not be deterred by any attempt to weaken it," the statement said.The two investigations in which Netanyahu is a suspect are known as Case 1000 and Case 2000.Case 1000 revolves around gifts he received from businessmen, including cigars and champagne. Netanyahu's lawyers say they were simply presents from long-time friends, with no quid pro quo.Case 2000 focuses on suspicions Netanyahu negotiated with the publisher of Israel's best-selling newspaper for better coverage in return for curbs on the competition. The prime minister's lawyers say Netanyahu never seriously considered any such deal.Netanyahu has described himself as a victim of a political witch hunt and said of the cases against him: "There will be nothing because there is nothing."The prime minister is under no legal obligation to step down if indicted, but some political analysts predict he would opt for new elections to renew his public mandate if charged.All four prime ministers of the past two decades have been suspects in police investigations but only Ehud Olmert was charged and convicted. He spent 16 months in jail for accepting bribes from real estate developers.In high-profile cases such as these, police usually say if they have gathered sufficient evidence against the suspects, before handing over to the Justice Ministry, where the Attorney-General and prosecutors decide whether to file charges.Mordechai Kremnitzer, a law professor and vice president of the Israel Democracy Institute, said Netanyahu's governing coalition was abusing "the power of legislation" to try to extricate him from his legal problems."This has set a record and reflects a complete loss of restraint and total shamelessness," he said.