The Irish election: More trouble for Israel in the Emerald Isle

Even before last week’s election, the Irish government was considered among the most hostile in Europe to Israel, second only to Sweden. 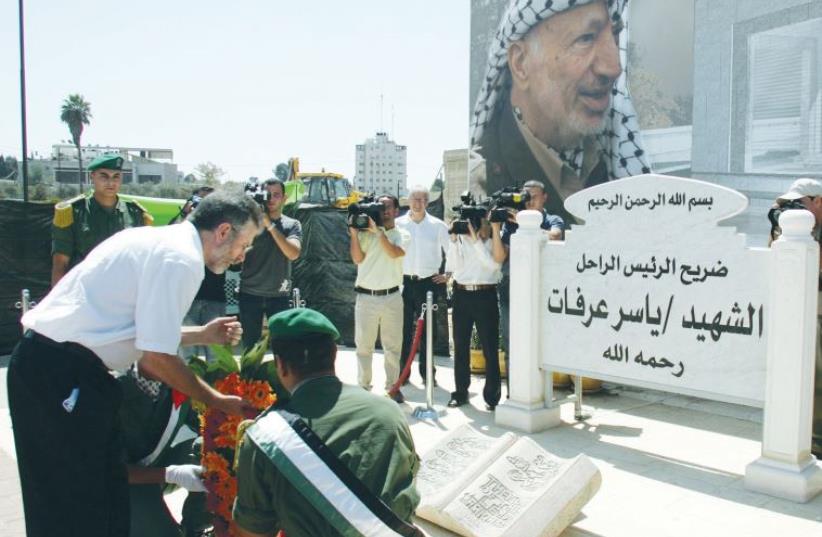 SINN FEIN LEADER Gerry Adams lays a wreath at the grave of Yasser Arafat in Ramallah in 2006
(photo credit: REUTERS)
Advertisement
It may take weeks to sort out the recent Irish election and crown a new government in Dublin, but one thing is already certain: Israel’s position in the Emerald Isle is about to go from bad to worse.Though it is not clear whether the ruling Fine Gael will form a coalition together with its bitter political rival Fianna Fail, or whether Fine Gael will form a minority government, it is clear that pro-Israel candidates were roundly defeated across the board, while pro-Palestinian candidates enjoyed a good day Friday at the polls.For instance, Fine Gael’s Alan Shatter, the sole Jewish MP who served from 2011 to 2014 as both justice and defense minister, and who has been the victim of anti-Semitic swipes for his willingness to speak up for Israel, was defeated.As was Joanna Tuffy, a Labor Party parliamentarian who headed the small Irish-Israel parliamentary friendship caucus. In fact it is not clear whether there will even be such a group in the next parliament, as the three or four members of this group were either voted out or retired.On the other hand, new MP Gino Kenny, from the Anti-Austerity Alliance, celebrated his election victory on Saturday by waving a Palestinian flag. (Imagine the reaction were a congressman from Oklahoma to celebrate his victory on election night by waving not the US flag, but rather the blue and white banner of Israel.) Another candidate who won, Independent John Halligan, launched his candidacy in January in the presence of Palestinian Authority Ambassador Ahmad Abdelrazek.“Delighted that Palestinian Ambassador Ahmad Abdelrazek will be attending my #GE16 launch on Friday in the Granville at 7:30pm,” he proudly placed on his Facebook page in January.One man, John Fogarty, responded: “This is the same man whose government hasn’t allowed an election in eleven years ? Wow. You sure do pick them John.”Both Kenny and Halligan supported position statements circulated by two Irish-Palestinian solidarity groups.Sadaka, the Ireland Palestine Alliance, circulated a “pledge” among all 551 candidates asking them to sign off on the following position points: Ireland should formally recognize a Palestinian state; “vigorously work to end the blockade of Gaza”; seek a EU ban on trade and investment with “Israeli colonies/settlements”; and suspend military export licenses to Israel and public procurements from Israeli arms companies.Another organization, the Ireland-Palestine Solidarity Campaign, asked candidates to commit themselves to working to end bilateral Israel-Irish arms trade, and to suspend the EU-Israel Association Agreement.Of the 551 candidates, 263 gave some level of endorsement to these pledges, and 142 gave their full commitment. Of these, more than 30 were elected to the 157-seat parliament.Among those who gave their commitments were the 23 elected members of Sinn Fein, the left-wing, strongly pro-Palestinian party that nearly doubled its strength and is posed to become the leading opposition party, with the aim of being the largest party in the next election. Sinn Fein’s increased parliamentary strength will give them more impact in parliament, something that will be felt by increased speaking time in debates and the ability to bring more motions. All of this, in turn, will translate into more media attention for their key agenda items, including their pro-Palestinian positions.In addition, they might try to embarrass the government by putting forward propositions such as recognition of a Palestinian state, something the parliament has done, but the government has not.All of the above bodes ill for Israel in a country where even before last week’s election the government was considered among the most hostile in Europe to Israel, second only to Sweden.And that is even though over the last five years, under the leadership of Prime Minister Enda Kenny, and with Shatter in the government for much of that time, the tone toward Israel was less strident than during the premiership of Brian Cowen from 2008-2011. Cowen’s foreign minister Micheal Martin was a caustic critic of Israel, especially its policy regarding Gaza.Under Kenny, however, the government was less focused on the Middle East, and more with internal Irish concerns, such as the economy. Nevertheless, even under this government Ireland, according to Israeli diplomatic officials, led efforts to keep the EU from adding Hezbollah to its terrorism blacklist in 2013.After the election that brought the Kenny government to power in 2011, the feeling in Jerusalem was that if until that election Ireland scored a “zero” on a scale of zero-to-10 regarding warmth toward Israel, with the new government the needle was been pushed to 1.5. Now the dial has moved back to zero, if not into negative numbers.While some may say that Ireland’s position does not matter, that it is a small country with little sway, it is important to remember that it is an English-speaking country, so that when an Irish politician blasts Israel in parliament, and a video appears on social media, it has a much greater reach than if a Swedish MP gives an anti-Israel speech in a language few people can understand.The election in Ireland has presented Israel with a very challenging situation. To overcome it, what is needed is not to say it simply doesn’t matter, but rather to engage it. One way to engage Ireland is to do so indirectly, by engaging with the large Irish diaspora in the US, in the hopes that this could perhaps trickle back to Ireland and soften the tone on Israel somewhat.Other ways to engage include initiating parliamentary exchanges, highlighting Ireland’s contribution to Israel, and bringing to Israel delegations of journalists and opinion- makers, such as mayors and local legislators, to show them a side of Israel they will definitely not be hearing much of in the next Irish Dali, quickly shaping up as one of the most hostile parliaments toward Israel in Europe..