US Special Representative for International Negotiations Jason D. Greenblatt is visiting Israel and the Palestinian territories this week. 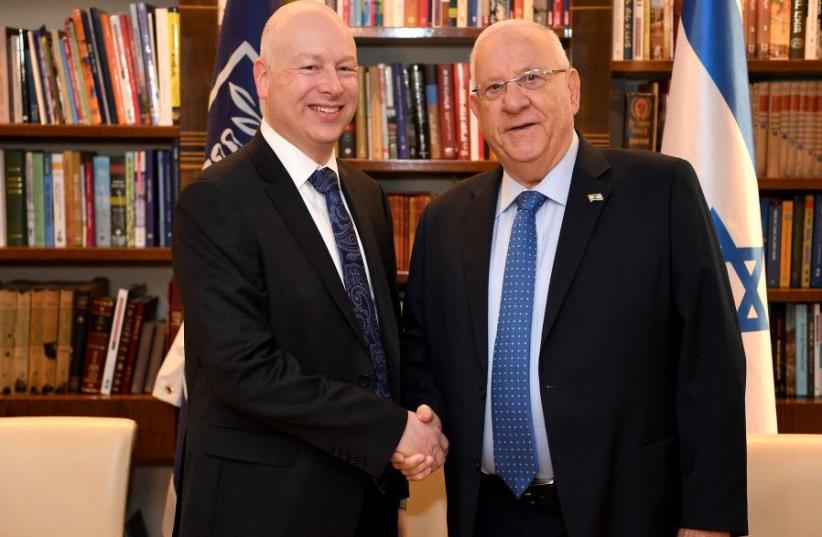 Assistant to the President and Special Representative for International Negotiations, Jason Greenblatt meets Israeli President Reuven Rivlin at the President's Residence in Jerusalem, Wednesday, March 15, 2017.
(photo credit: MATTY STERN/U.S. EMBASSY TEL AVIV)
Advertisement
Jordan has an important role to play in making peace between Israel and the Palestinians, US Special Representative for International Negotiations Jason D. Greenblatt said on Wednesday, after meeting in Amman with King Abdullah II.Greenblatt is visiting Israel and the Palestinian territories this week to hear from Israelis and Palestinians.“We agree on the need for peace between Israelis and Palestinians,” he tweeted after the meeting. “Jordan an important ally in this effort.”
Reuven Rivlin meeting with US Middle East Envoy Jason Greenblatt on March 15, 2017 (credit: GPO)

Visited Yeshivat HaKotel tonight in the Old City, with a view of the heart of ancient Jerusalem pic.twitter.com/B7D8iPuSlW
— Jason D. Greenblatt (@jdgreenblatt45) March 15, 2017


According to The Jordan Times, Abdullah told Greenblatt that the United States also has an important role to play in relaunching talks that have been frozen since April 2014. He added that a twostate solution would have an important impact on regional stability.On Wednesday morning, Greenblatt met with President Reuven Rivlin and the Coordinator of Government Activities in the Territories (COGAT) Maj.-Gen. Yoav Mordechai and “discussed Israeli security challenges and ways to boost Palestinian economy.”


In Jericho, Greenblatt said he “met with Palestinian security chiefs and saw recruits training. We reviewed our joint work to build their capacity to fight terrorism and provide security that benefits both Palestinians and Israelis.”

Alfano pledged his commitment to a two-state solution and told Abbas that Israeli settlement activity was “illegal” and that Italy supported UN Security Council Resolution 2334 against settlement activity, which was approved in December.Hamdallah called on Italy to recognize Palestine as a state now, rather than wait for a peace deal to be concluded.Adam Rasgon contributed to this report.