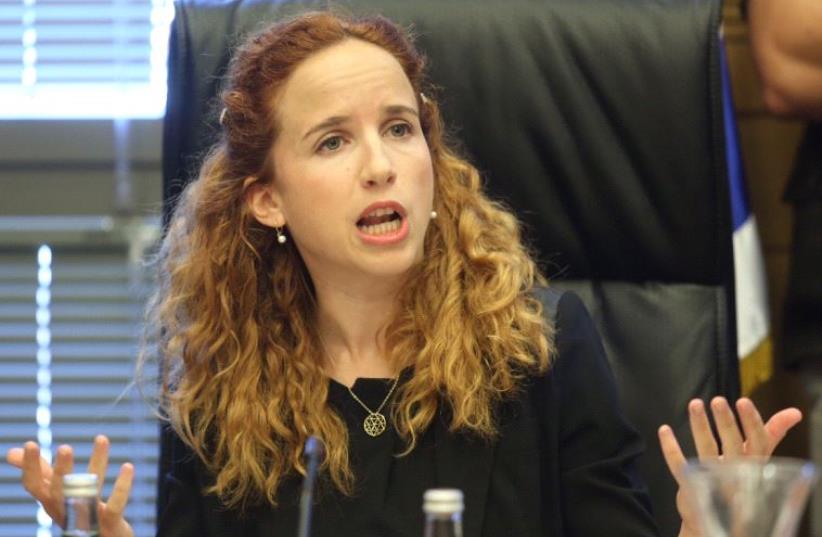 Stav Shaffir gestures while speaking in the Knesset
(photo credit: MARC ISRAEL SELLEM)
Advertisement
A fierce row between Agriculture Minister Uri Ariel and Labor MK Stav Shaffir broke out in the Knesset Comptroller Committee on Wednesday over allegations that Ariel redirected funds designated for the periphery to communities connected with his associates in the country’s center.The allegations were first made in the State Comptroller’s Report in May. It was charged that when Ariel was construction minister between 2013 and 2015, he diverted funds intended to set up young, dynamic communities in the periphery to religious communities in the Tel Aviv area, because they were headed by associates of his.Deputy-Director of the State Comptroller’s Office Liora Shimoni explained that the purpose of the state-supported communities was to strengthen towns in the periphery and prevent negative migration from these places to the center of the country.“But as the project developed, these goals were switched and became a solution for more political and ideological needs,” she said.Shimoni said that private individuals with no government position had been allowed to determine policy as to which communities would be funded, allowing a greater number of religious communities outside of the periphery to be funded.“Those political associates of the minister and of the Tekuma Party [which Ariel represents within the Bayit Yehudi Knesset faction] operated in the name of the minister and in their own name, drafted the [policy] proposal and gave direct instructions to professionals [in the Construction Ministry],” added Shimoni.“In fact, the professional elements within the Construction and Housing Ministry were almost totally uninvolved and it remained in the hands of private individuals,” she concluded.According to the State Comptroller’s Office, 43% of the funds went to the central district, 30% of which went to areas of high socioeconomic status, and only 39% of the total funds went to the periphery.Ariel countered these claims in committee by arguing that the communities program had been successful and that funds had been disbursed to a wide variety of groups.“All parts of Israeli society take part in this program – Jews, Arabs, Ethiopians, Hashomer Hatza’ir, Bnei Akiva, and everyone else,” insisted Ariel.He argued that the program was implemented exactly in accordance with the government decision which approved it.Ariel also insisted that extra financing was provided to the program’s budget, but said that they come from funds allocated to Bayit Yehudi under its coalition agreement and that from these funds extra numbers of religious communities and non-religious communities were supported under the project.He also noted that communities in the city of Lod – which has a low socioeconomic status but is within the central district – were supported under the program. He argued that the fact that 43% of the funds went to the center did not mean that those funds went to undeserving locales.“I worked in exact accordance with the regulations,” Ariel stated.Ariel’s explanations did satisfy Labor MK Stav Shaffir, however, and Shaffir said that Ariel had simply used state-funds to help his political associates and those of Bayit Yehudi.“Money was transferred to NGOs in the center to strengthen Judaism and family values.The heads of these NGOs were hanging out in the Housing Ministry with Uri Ariel and represented him in [ministerial] meetings,” said Shaffir.“You’re an impudent liar,” retorted Ariel.Ariel’s fellow Tekuma MK Bezalel Smotrich went further, calling the State Comptroller’s Report “amateurish” and said that facts and data in it had been manipulated to frame Ariel.“This is a biased, political, and amateur report and you are harming the institution of the State Comptroller’s Office and [public] trust in it,” he stormed, calling for a review of the report.He also noted that Tekuma does not hold primary elections and there was, therefore, little need for Ariel to curry favor with political associates in such a way.