“In your effort to build peace between Israelis and Palestinians... we urge you to prioritize the issue of water,” the lawmakers wrote Trump in an official letter. 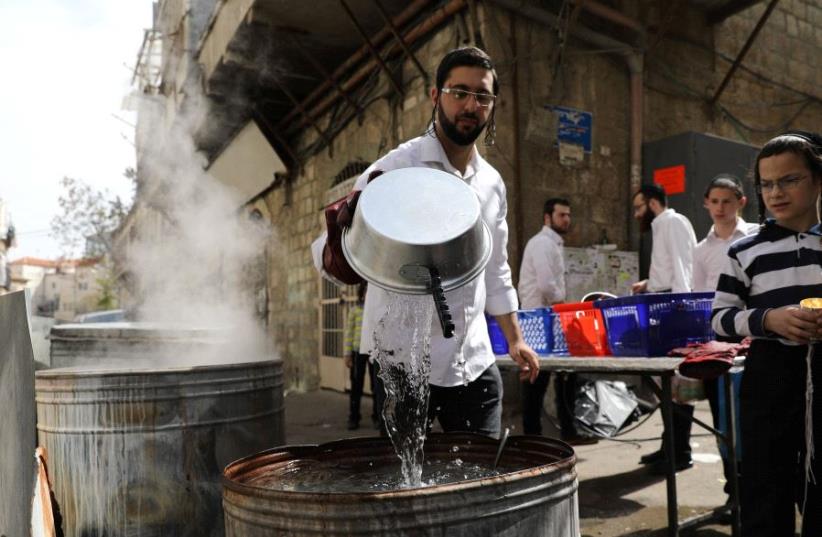 Ultra-Orthodox Jewish men sort their cooking utensils at they dip them in boiling water to remove remains of leaven in preparation for the Jewish holiday of Passover, in Jerusalem's Mea Shearim neighbourhood April 9, 2017
(photo credit: REUTERS)
Advertisement
Ahead of Donald Trump’s trip to Israel this week, a bipartisan group of congressmen and women called upon the president to address the critical situation of cross-border water scarcity and contamination.In a letter written following consultations this March with regional environmental group EcoPeace Middle East, the legislators stressed the idea that “water is an issue of mutual interest” between Israelis and Palestinians and a subject that has “seen great progress in recent months.” Nonetheless, providing safe drinking water to residents of both the West Bank and the Gaza Strip and curbing sewage discharge from the latter onto the shores of Israel require immediate international intervention, the parties argued.“In your effort to build peace between Israelis and Palestinians, and to further peace negotiations between their leadership, we urge you to prioritize the issue of water,” the letter said.The letter, which was sent to the president last week, was drafted by Reps. Earl Blumenauer (D-Oregon), Ted Poe (R-Texas), William Keating (D-Massachusetts), Jackie Walorski (R-Indiana), Gerald Connolly (D-Virginia), Tom Marino (R-Pennsylvania), Grace Meng (D-New York), Blake Farenthold (R-Texas), John Conyers Jr. (D-Michigan) and Dave Reichert (R-Washington).“Any US strategy for Middle East peace must deal with water insecurity in Gaza and the West Bank,” Blumenauer said. “We can all agree that addressing the current water crisis is a key component of regional stability.”Highlighting some of the recent advances made in the sector, the legislators wrote about how Israel recently agreed to double water sales to Gaza, while Israeli and Palestinian water authorities have consented to a framework for developing West Bank water infrastructure and services.“Further, Israel’s global leadership in sea water desalination has the potential to bridge gaps with its many water-insecure neighbors and build diplomatic bonds with strategic allies in the Gulf region and beyond,” they wrote. “Additionally, progress on water is critical to the health and security of Israel.”Currently, however, poor infrastructure and political stability are hindering the Gaza Strip in particular from developing a functional water and sanitation industry, they explained. Only 10% of the population in that territory has access to safe drinking water and all of Gaza’s groundwater is expected to be undrinkable within about a year, they wrote. In the West Bank, meanwhile, water access remains as low as 25-30 liters per person per day, as opposed to the US average of 375 liters per person per day, they said.“Given that the sewage discharged from Gaza to the Mediterranean often ends up on Israeli shores, poor availability of water and sewage treatment services poses health and environmental risks to Israelis,” the lawmakers added.Crediting National Infrastructure, Energy and Water Minister Yuval Steinitz for recognizing these pressing threats, the congressmen and women described how the minister has requested urgent action from the international community, as has Coordinator of Government Activities in the Territories unit head Maj.-Gen. Yoav Mordechai.Most recently, Mordechai wrote to international organizations and United Nations Middle East envoy Nickolay Mladenov, calling their attention to “the impending humanitarian crisis in the Gaza Strip,” they said.“The security and health of the people of Israel and the safe access to water and sanitation services for all people are both major priorities for the United States and the American people,” the legislators added.“As you work on issues related to Middle East peace, we urge you to make water a focal point of your conversations.”Welcoming their efforts, Gidon Bromberg, Israeli director of Eco- Peace Middle East, said that their letter “shows clear bipartisan support and understanding that solving the water crisis represents the low-hanging fruit of the peace process.”This appeal, Bromberg added, “calls on the president to seize the opportunity to improve people’s lives through more water in every household and less sewage in every stream.”