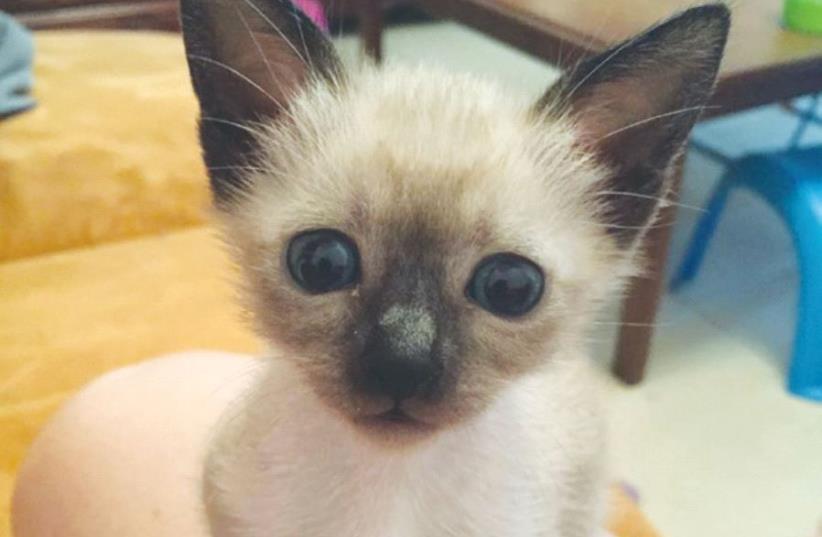 VOLUNTEERS SAVED some 30 cats and dogs from being thrown into bonfires last year, including this kitten.
(photo credit: Courtesy)
Advertisement
As Israelis kindled Lag Ba’omer bonfires on Sunday – some for the second night in row – 19-year-old Shahar Liani and her legion of volunteers were on the lookout anyone hurling innocent animals into the blazes.For the sixth year in a row, Liani and volunteers around Israel were leading patrols to “stop the horrific phenomenon of burning animals on Lag Ba’omer,” according to her Facebook event page. This year, the group recruited hundreds of people to join the effort, with nearly 900 signed up to observe bonfires and save animals from abuse.“Every year, we encounter dozens of cases of puppies and kittens being thrown in the fire during the Lag Ba’omer bonfires,” the event page says. “In previous years, we managed to save dozens of animals and give them a better life.”Liani first learned about this phenomenon – an unexplained act of abuse popular among teenagers – when she was in sixth grade in Ramat Gan. A boy in her class that year told her about people who burned a dog in their holiday bonfire, she recalled.“I researched and clarified this, and I understood that this is a widespread phenomenon – it happens a lot,” Liani told The Jerusalem Post on Sunday. At just 13 years old, she decided she needed to do something about these cruel activities.“It was an idea that I published on Facebook, and people began to join,” she said.In the first year, squads of volunteers patrolled bonfires in 11 towns. That number grew to 70 in 2016, according to Liani. This year, the tours are only occurring in 55 towns, because Liani is in her first year of service with the IDF and has significantly less time to organize the events.Volunteers circulate on Lag Ba’omer before the bonfires even begin to look for animals that might have been placed in boxes in preparation for the burning practice, Liani said. In places like Tel Aviv, where volunteers number more than 100, the groups divide into shifts throughout the night.“We patrol and do rotations around the bonfires again and again and again,” she said. “We stay until the wee hours of the night.”Last year, the volunteers were able to save some 30 cats and dogs, who were transferred to foster homes until they could be placed in adoptive families, according to Liani.As volunteers attempt to rescue cats and dogs from the flames, they sometimes face trouble with teenagers intent upon harming the animals, Liani acknowledged.Although they do not have direct access to the Israel Police in every city, the volunteers work with a group called “Meizam 100,” an animal- rights group that serves as a bridge to law enforcement officials.“In the first year, there was a case in which a group of teenagers threw a dog – like a ball – into the fire,” Liani said. “My volunteer was on her way back home from the tours.”After the volunteer reached into the flames and saved the dog, the perpetrators chased after her and the puppy. Ultimately, they reached a safe place unharmed, Liani explained.Despite the fact that this disturbing trend continues, Liani is optimistic that the phenomenon will disappear in coming years.“There is still a large number of animals that people want to throw in the fire,” she said. “But more people are aware. People who want to do this are more afraid to do so.”Not only do Lag Ba’omer fires pose a threat to small animals, they contaminate the air Israelis breathe.While the Education Ministry moved the Lag Ba’omer school holiday to Monday this year and called for bonfires on Sunday night, blazes already began to wreak environmental havoc on Saturday night, when Israelis across the country began lighting fires – the night on the Jewish calendar for the holiday.As a result, air pollution levels were up to four times higher than normal in some areas of the county.Air pollution levels reached their peak between 12:40 and 4:30 a.m.on Sunday, due to an increase in particulate matter, which can negatively impact the respiratory system, the ministry said. While conditions were poor in many places, particulate matter concentrations in the Tel Aviv area were relatively lower in comparison, due to the lack of available open space and perhaps because fewer bonfires were lit, the ministry reported.Levels of PM10 – particulate matter with a diameter of 10 microns or less – were 4.1 times higher than those on an average clear day in Hadera’s Heftziba neighborhood and 3.5 times higher in Jerusalem’s Shmuel Hanavi neighborhood, ministry data showed.Even more problematic were levels of PM2.5 – fine particulate matter with a diameter of 2.5 microns or less – which climbed to 6.6 times of those on an average clear day in the same Jerusalem neighborhood and 5.4 times average levels in Bnei Brak, the ministry said.