'Black flag of ISIS' may be alternative to Palestinian Authority, Clinton says

Democratic front-runner speaks day after Kerry made headlines by warning that Israel was in danger of becoming a bi-national state. 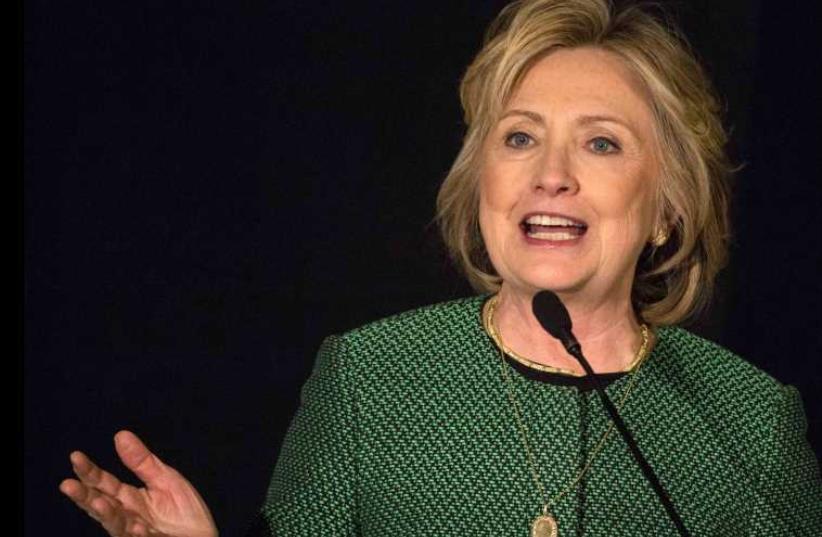 Hillary Clinton
(photo credit: REUTERS)
Advertisement
WASHINGTON – The black flag of Islamic State may fly over the Palestinian territories should the Palestinian Authority and its president, Mahmoud Abbas, fail to maintain order, former Secretary of State Hillary Clinton said on Sunday.Speaking to the Brookings Institution’s Saban Forum, an annual Washington gathering on relations between the US and Israel, Clinton, the front-runner for the presidential nomination of the Democratic Party, recommitted to the pursuit of a twostate solution: “A one-state solution is no solution,” she told the forum, but called on Palestinian leadership and the Arab League to recognize that, under such a scheme, Israel would be a Jewish state, alongside a sovereign Palestinian state.In a speech framed by her personal commitment to Israel, Clinton said three major threats face the state that require robust American defense and diplomatic support: Metastasizing extremism throughout the Muslim world; an aggressive government in Iran; and an effort to delegitimize Israel in international bodies.The first fight, she said, is a shared one. A new brand of terrorism embodied by Islamic State must be fought on the ground and online, Clinton said multiple times, to applause. The second will require strict enforcement of the nuclear deal reached with Iran back in July.“There will be consequences for even small violations [of the Joint Comprehensive Plan of Action] if we see any indication,” Clinton said. The deal allows for one member of the United Nations Security Council to snap sanctions on Iran back into place should a violation be identified.Iran’s “fingerprints,” she added, are on every conflict in the Middle East – a challenge for the US and Israel alike.She said the nuclear deal was imperfect, but that it would make her job easier as president, should she be elected, if the issue of Iran’s nuclear ambitions is successfully shelved.She also had harsh words for the boycott, divestment and sanctions movement against Israel, which she said was not only counter-productive, but linked to anti-Semitism.She offered criticism of Israeli leadership, as well, asking many conservative Israeli politicians present, who is “standing in the wings” should Abbas leave office.“Let’s be honest here,” she said. “The alternative is the black flag of ISIS [Islamic State].”Earlier in her prepared remarks, she noted the growth of an Islamic State cell in the Sinai Peninsula, and the potential for support of the group in the Gaza Strip.In her call for renewed negotiations, she suggested a potential alignment of interests with the Arab world that could both facilitate the talks, and could be bolstered by an ultimate settlement of the decades-old conflict.The Saban Forum also featured speeches from Israel’s Defense Minister Moshe Ya’alon and US Secretary of State John Kerry.