What Germany’s newly assertive Merkel means for Israel, US, EU

The long-term trend for Israel is a turning to the east and a search for relationships in India, China and elsewhere. 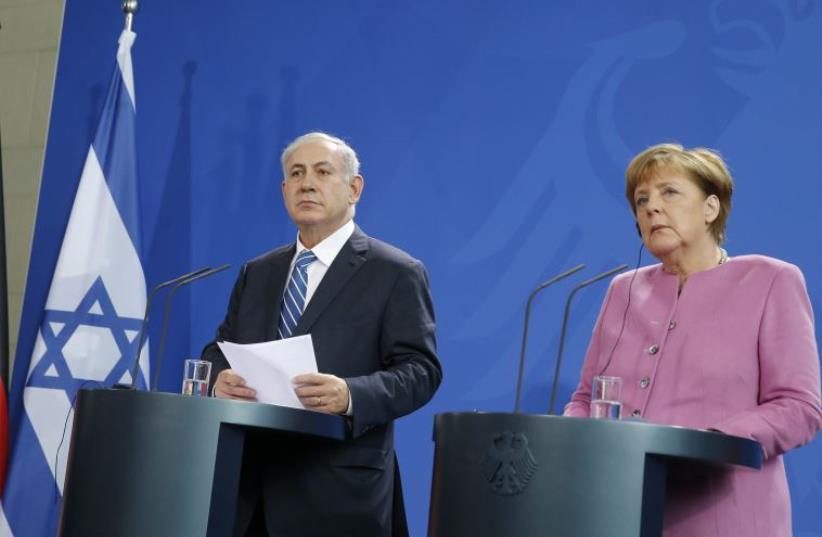 Netanyahu (L) and German Chancellor Angela Merkel address a news conference at the Chancellery in Berlin, Germany, February 16, 2016
(photo credit: REUTERS)
Advertisement
Germany should be the kind of country US President Donald Trump likes. It’s a winner economically, and it’s good at making deals.
Trump pulling US out of Paris climate deal (credit: REUTERS)
But Trump thinks its acumen hurts the US economy. He recently slammed Berlin for its “MASSIVE trade deficit” and claimed Germans pay “FAR LESS than they should” to NATO. Chancellor Angela Merkel said last week that her country could no longer rely on the US and that “we Europeans truly have to take our fate into our own hands.”Merkel is helming a new European agenda, bifurcating her Western values from those laid down by the US or the UK. In doing so the chancellor presents a picture of division between continental Europe and the US and UK. This has ramifications for Western powers, but it will also affect relations with Israel, the Middle East and Asia. Is this a new Merkel, or just posturing for elections this year? First elected chancellor in 2005, Merkel is the European Union’s longest serving leader. Her first 10 years in office were relatively uneventful, but she was critiqued for handling of the Greek financial crises.Konrad Yakabuski of Canada’s Globe and Mail accused Merkel of “unreadability and unwillingness to be pinned down.” He also described her as “Europe’s de facto leader.”During the migrant crisis in 2015, Merkel broke with the past and boldly vowed that Germany would take in refugees. Even when the migrant numbers seemed they would top one million, she stuck with the policy of letting them in. This has gained her praise across the continent from left-wing voices, and scorn on the nationalist Right. Her open-door policy was cited by proponents of Brexit in 2016 and of the Right in elections in the Netherlands and France. As a lightning rod for anti-German critique, she has fueled populist agendas in Greece and France. She is a symbol of Europe’s current struggles.It’s no great surprise Trump doesn’t mesh with Europe at a time he is saying “America First.” Where Barack Obama and John Kerry were seen as Europhiles, the current US president plays to every stereotype of the “ugly American.” The February 4 edition of Der Spiegel featured Trump beheading the Statue of Liberty on the cover. CNN called Trump’s decision to pull out of the Paris Agreement on climate change a “middle finger to the future.” Germany, Italy and France issued a joint statement standing by the agreement and saying it cannot be renegotiated.A Merkel-led EU may weaken German-Israel relations. Israel’s ambassador to Berlin, Yakov Hadas-Handelsman, told The Economist in 2015: “Generally, Germany is Israel’s closest ally in Europe.” This relationship was formed in the shadow of the Holocaust, and blossomed in fields such as security, trade and support for Israel in international forums.However the concern in Israel is that a Germany leading the EU will seek cohesion and common positions across the EU bloc, being less willing to take an independent line supporting the Jewish state at UNESCO or elsewhere.Former European Parliament president Martin Schulz is Merkel’s main opposition in September’s federal election. For Israel a Schulz victory would be even worse; Israeli politicians recall his 2014 Knesset speech where he accused Jerusalem of discriminating in water usage against Palestinians.With Merkel busy concentrating on leading the EU through a rocky time and newly elected French leader Emanuel Macron dealing with his own parliamentary elections this month, the long-term trend for Israel is a turning to the east and a search for relationships in India, China and elsewhere. The Indian prime minister, for instance, is scheduled to visit in July.