"We will fight terror and win, because we have no other choice," defense minister vows. 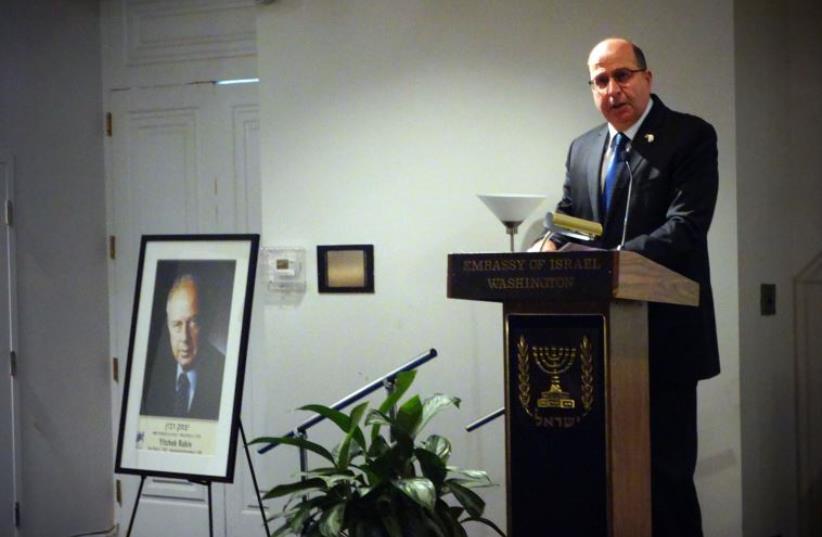 Defense Minister Moshe Ya'alon speaks in Washington
(photo credit: ARIEL HERMONI / DEFENSE MINISTRY)
Advertisement
Defense Minister Moshe Ya’alon and US Secretary of State Ash Carter have opened talks on the defense package Washington will offer Israel over the next decade in the wake of the Iran nuclear deal.Ya’alon, who is in the US on an official visit to discuss the package, spoke at the Israeli Embassy in Washington on Monday night at a memorial event marking 20 years since the assassination of prime minister Yitzhak Rabin.“During this visit, I will be meeting with my good friend Secretary of Defense Ashton (Ash) Carter, who has time and again proven his commitment to the security of the State of Israel,” Ya’alon said.“We will discuss how to further increase the IDF’s capacity and capabilities to maintain our qualitative edge given increased and growing regional threats on the security of our country,” he continued.The defense minister spoke at length about Rabin’s life and deep involvement in the defense establishment at all levels.“Today, 20 years later [after the assassination], the United States is Israel’s greatest friend. Its contribution to our security is tremendous and is truly our strategic cornerstone,” he said.“The relationship between the United States and Israel is based on shared values and interests, and is clearly expressed in the strong ties between our defense establishments, armed forces and intelligence agencies,” the defense minister said.Ya’alon thanked “the American people, President Barack Obama and the Congress, for your contribution and commitment to our security. There is no truer friend of Israel than the United States of America. And no difference of opinion can harm this relationship.”Earlier this month, Gen. Joseph Dunford, the chairman of the US Joint Chiefs of Staff, visited Israel on his first official overseas visit since taking up his post on October 1.Ya’alon also addressed the current wave of terrorism, saying, “An intense wave of terror attacks” is being “perpetrated by Palestinians, who have been driven by incitement and lies against the State of Israel. This is an opportunity to say it again, loud and clear: We extend our hand in peace to our Palestinian neighbors.The State of Israel is not violating the status quo on the Temple Mount, whatsoever. This is a lie. We uphold freedom of religion and respect the beliefs of every person.“We will fight terror and win, because we have no other choice,” Ya’alon vowed.Earlier in October, Ambassador to the US Ron Dermer said Israel and the United States had resumed talks on future defense aid, which had been suspended by Prime Minister Benjamin Netanyahu in protest of the Iran deal.“Israel hopes that the discussions we are now engaged in will culminate in a longterm agreement that will dramatically upgrade Israel’s ability to defend itself by itself against any threat and enable Israel to address the enormous challenges we now face in the region,” Dermer said in a Facebook post.The allies had been looking to agree on a 10-year aid package to extend the current US grants to Israel valued at $3 billion annually that are due to expire in 2017. But Netanyahu froze negotiations ahead of the July agreement reached between Iran and world powers.“With the nuclear deal now moving ahead, Israel is also moving ahead, hoping to forge a common policy with the United States to address the continuing dangers posed by Iran,” Dermer said.“Discussions over a new Memorandum of Understanding between Israel and the United States, which had been on hold for some time, resumed this past week in Washington,” he said, using a term for the defense-aid agreement.Before the suspension, the two sides were close to a new package of grants worth $3.6b. to $3.7b. a year, US and Israeli officials have said. They have predicted that the amount could increase as Israel argues that it needs more aid to offset a likely windfall for Iran in sanctions relief that might be used to finance Iran’s regional proxies. Reuters contributed to this report.