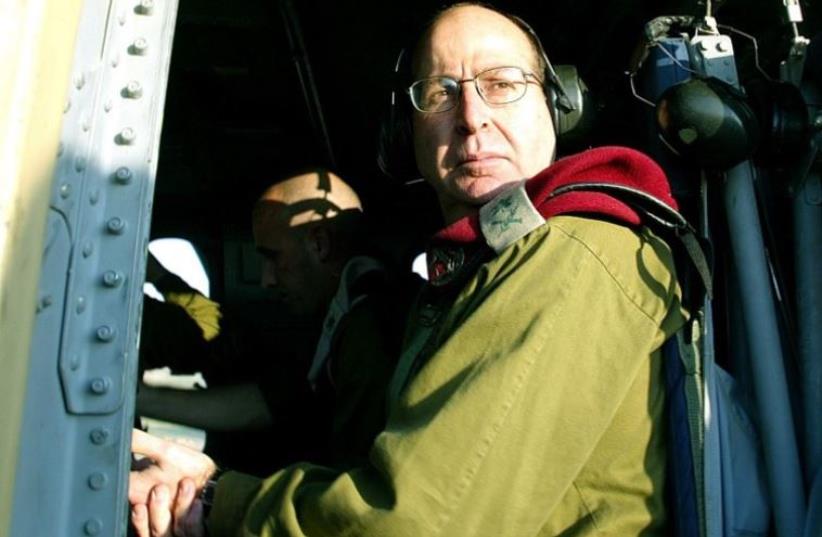 Then-chief of staff Moshe Yaalon is seen aboard a Black Hawk helicopter in 2004
(photo credit: AFP PHOTO)
Advertisement
Former defense minister Moshe Ya’alon has criticized his successor, Yisrael Beytenu leader Avigdor Liberman, for ordering IDF Chief of Staff Lt.-Gen. Gadi Eisenkot to stop soldiers from volunteering with migrant children.Liberman issued the order because he prefers that soldiers volunteer to help Holocaust survivors and other needy Israeli citizens.“I would expect the defense minister to deal with other things, not carry out maneuvers against the chief of staff in the press,” Ya’alon said on Tuesday at a medical conference at the Jerusalem International Convention Center.Ya’alon also confirmed an exclusive report in Tuesday’s Jerusalem Post that he had formed a new nongovernmental organization that he will use as a platform for his current and future political activity.“If elections are called, I will have to decide if I will run independently or join together with other parties,” he told the crowd.Much of Ya’alon’s speech was devoted to thinly veiled attacks against Prime Minister Benjamin Netanyahu, who took away his job and gave it to Liberman when Yisrael Beytenu joined the coalition in May.“At a time when there are attempts to blatantly harm freedom of expression and the press, the rule of law and public servants, it is important to give people hope that it can be different,” Ya’alon said.The former defense minister criticized Netanyahu for changing his mind on key issues. “Leaders must know to make decisions according to their conscience and inner compass, not by the way the wind blows,” he said. “They must know how to go against the grain, the column writers and social media. It is easy to lose your head, zigzag and get dragged into extremism, but that is not leadership.”Ya’alon defined leadership as supporting ministers and their reforms and not undermining them, silencing them when they give their professional opinions or firing them.Reacting to recent steps taken by Netanyahu against Israeli media outlets, Ya’alon said: “When government officials declare war on the press, the Supreme Court, judges and other public servants, there is a danger that our democracy could be harmed.”Ya’alon also accused Netanyahu of fear-mongering on the Iranian nuclear threat.“I say from clear knowledge that there is no existential threat to Israel at this time,” he said. “It would be proper for the national leadership to stop scaring the citizens.”Regarding the Israeli-Palestinian conflict, he called for taking steps to help the Palestinian people while it remains unsolved.“A decisive majority of the public on the Right and Left does not believe the Israeli-Palestinian conflict will be solved in the years to come,” he said.“Meanwhile, we should improve the quality of life of our neighbors.”