Speaking at the Israel Planners Association’s Annual Conference in Tel Aviv on Thursday, the architect and engineer is use to dealing with public ire. 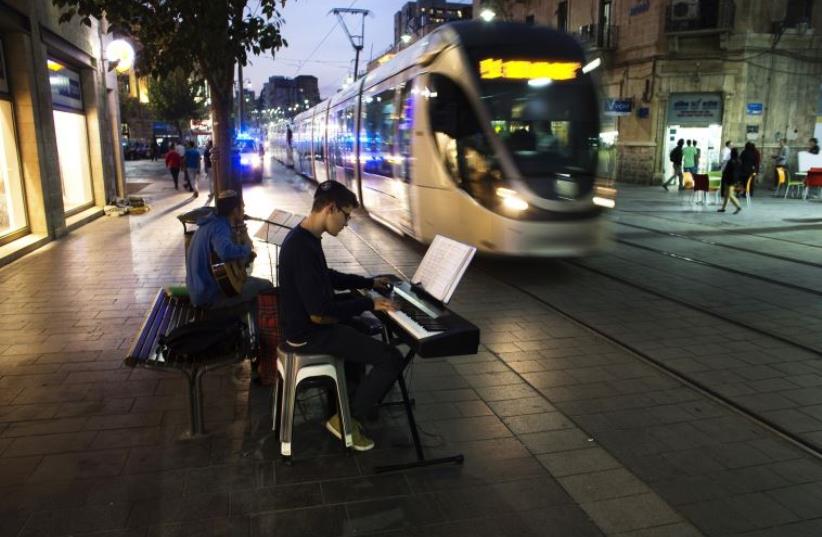 Israeli teens play music as a light rail tram passes by in Jerusalem
(photo credit: REUTERS)
Advertisement
Manuel Paulo Teixeira has a message for those in charge of the Tel Aviv light-rail project: Happy commuters are informed commuters.Speaking at the Israel Planners Association’s Annual Conference in Tel Aviv on Thursday, the architect and engineer specializing in historic renovation shared his experience in building the light-rail system in Porto, Portugal, and also of dealing with public ire.He was part of the team that transformed Porto into a light-rail wonder, though not before suffering through the seven years of construction it took to build the six-line Metro do Porto system. His advice was especially timely as construction mayhem has taken over the Tel Aviv metropolitan area as the light-rail system gets built.Teixeira said commuters in Porto nowadays seem to be some of the happiest around, which he attributed to the constant communication maintained with the public from the start of the entire process, which included inviting the public to see the system and allowing them to voice their opinions as well. This was his main recommendation to the conference participants.When the public is not provided with clear details of the construction process, he told The Jerusalem Post, they are left on edge. Overall, he said that his experience with the Porto system became less about transportation and more about urban renewal, as the city found ways to integrate the light rail into the old, narrow streets and even incorporate archeological finds into the stations.During his short visit to Israel, sponsored by the Foreign Ministry, the Portuguese Embassy in Israel, Camões – Institute for Cooperation and the Council for Preservation of Israel Heritage Sites, Teixeira toured parts of Tel Aviv and Jerusalem and was especially impressed with the capital city’s light-rail system.“It’s beautiful. Something that I really appreciated was to see all types of people, all types of religions, using the same mode of transport,” he said. “It’s so democratic in that sense, and people from all economic levels and societal levels use it.”Although he is in Israel only to present his experience with Metro do Porto, he said he would be open to providing his expertise in an official capacity if asked. The next project for Teixeira is planning the construction program for Porto’s new central bus station, in addition to his consulting capacity around the world, especially in Spanishand Portuguese-speaking countries.