It was not until 2000 that women were allowed to serve in artillery, infantry, and navy combat units. 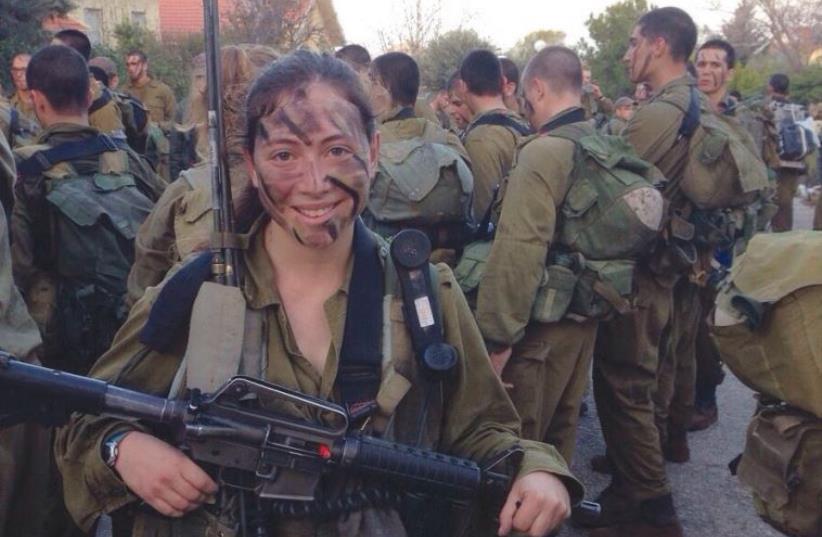 Elisheva Rubenstein from the Netherlands
(photo credit: IDF)
Advertisement
Rebecca Karp wakes up at the crack of dawn, puts on her olive green uniform, and begins her day filled with heavy lifting, training, and operating heavy machinery.She carries herself with purpose and passion by serving in the IDF in the place she now calls home.Rebecca’s love for Israel blossomed later in life, when she chose to make aliya at age 21 from her native California and became an Israeli citizen.Like Karp, Liad Gad and Elisheva Rubenstein also chose to take the aliya plunge and the three not only serve their country, but are thriving in a male-dominated combat unit.Gad, 18, was born in Thailand to Israeli parents and has had a passion for Israel and serving in the IDF from a very young age. When her older brother joined the IDF when she was 15, her entire family followed him to Israel and her desire to serve in the army grew.“I knew since I lived in Thailand that I wanted to be in the army,” she said. “My parents are really pro-army and IDF and my whole family did the army. I knew I wanted to be a fighter.”Rubenstein, 19, also made aliya during her teenage years. However, she immigrated alone. Born in the Netherlands, Rubenstein decided to join the IDF at the age of 18 as a lone soldier as a result of news coverage coming out of Israel. She, too, was placed in an artillery unit with a majority of males.“I wanted to make a change,” Rubenstein said. “I felt very helpless that I wasn’t doing anything while terrorists were in the country. I felt like I had to go help.”Karp also made aliya on her own this past July from California.After living in Israel during a gap year and a study abroad program, Karp decided that Israel was where she wanted to live. She left her university studies and joined an IDF artillery unit only three months later. Promoted to the rank of sergeant, Karp works in the command center of an artillery battery.“The more I was in Israel I realized that I couldn’t just make aliya without joining the army,” she said. “Joining the army and serving the country is such a huge part of being Israeli. If I was going to make aliya, then I had to join the army.”
Rebecca Karp from CaliforniaGad, Rubenstein, and Karp all serve in the artillery, where women are few. Except for the War of Independence, women were not allowed to serve in combat units until 1994, when the High Court of Justice ruled that some combat roles should be open to female soldiers.It was not until 2000 that women were allowed to serve in artillery, infantry, and navy combat units.According to the IDF, women make up around 33% of the army. However, as of late 2012, only 2.2% of women served in combat units. Gad’s unit has 60 males and eight females, which might be intimidating to some women, but she says its difficulties are overshadowed by its fulfilling attributes.“We like the challenge,” said Gad. “We knew it would be like this from the beginning. It’s harder, but it’s rewarding.”Within her unit, Gad commands firing teams.Rubenstein echoed Gad’s comment by saying, “I love that boys and girls are mixed and that girls get treated the same way boys do. We do everything with them.”“I always knew that when I joined the army I was going for a combat position,” said Karp. “I really couldn’t picture myself doing anything else and I’m really happy that I did.” Liad Gan from Thailand