The Knesset is marking Tu Bishvat and the birthday of the Knesset by holding a tree planting ceremony led by Knesset Speaker Yuli Edelstein at the parliament's archaeological garden. 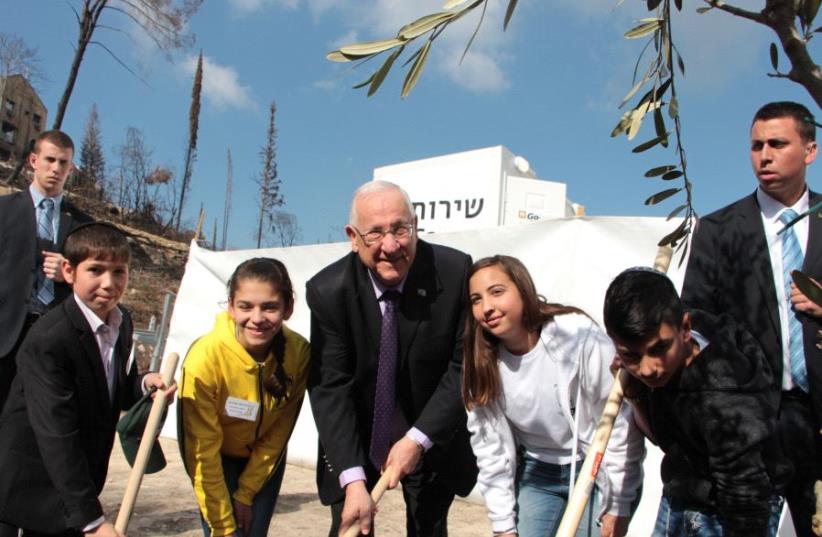 Tu BiShvat Ceremony with Israeli President Reuven Rivlin
(photo credit: KKL-JNF)
Advertisement
The Im Tirtzu and Women in Green organizations intend to use Wednesday’s Tu Bishvat holiday to advance Israel’s ties to Gush Etzion.The right-wing groups are sponsoring a tree planting at Oz Vegaon – a nature reserve near the Gush Etzion Junction that was started in 2014 by Women In Green founders Nadia Matar and Yehudit Katsover – as a memorial to three boys who were kidnapped nearby and murdered, Naftali Fraenkel, Gilad Shaer and Eyal Yifrach."We would like to warmly welcome the Im Tirtzu members for choosing the Oz and Gann Nature Reserve to be the site of the movement's Tu B'Shvat Campaign, and we will continue to develop and strengthen the reserve that was restored in memory of the three boys who were kidnapped and continue to express the unity of the people and its revival from sorrow and mourning for building, prosperity and growth," Women in Green said in a statement.Im Tirtzu is holding the event in memory of Im Tirtzu activist and former lone soldier Coby Burstein, who immigrated to Israel from New Jersey and was killed in a car accident in 2015. The public will be invited to help plant 25 olive trees in his memory and to attend a Tu Bishvat Seder.The Knesset will mark Tu Bishvat and the birthday of the Knesset by holding a tree-planting ceremony led by Knesset Speaker Yuli Edelstein at the parliament’s archeological garden; an afternoon prayer service with Ashkenazi Chief Rabbi David Lau; and a Tu Bishvat Seder led by MKs Rachel Azaria (Kulanu) and Aliza Lavie (Yesh Atid).Lavie and Yesh Atid leader Yair Lapid led a Tu Bishvat Seder for their faction and Yesh Atid mayors and activists Monday afternoon. Lapid read from the writings of Zionist visionary Theodore Herzl and Lavie led readings of texts and the singing of songs related to the holiday.In past years, political parties held tree-planting ceremonies that were open to the public.But this year, no politicians reported that they would hold tree-planting events, except for Zionist Union leader Avi Gabbay, who along with veterans of the Palmah will be planting near the Sha’ar Hagai junction.When the Kadima party was founded in December 2005, it held a Tu Bishvat tree-planting ceremony a month later in the Ramat Hanegev Regional Council.Zionist Union faction chairman Yoel Hasson, who was one of Kadima’s founders, said he remembered his tree.“The tree is blossoming, but the party not so much,” Hasson said.